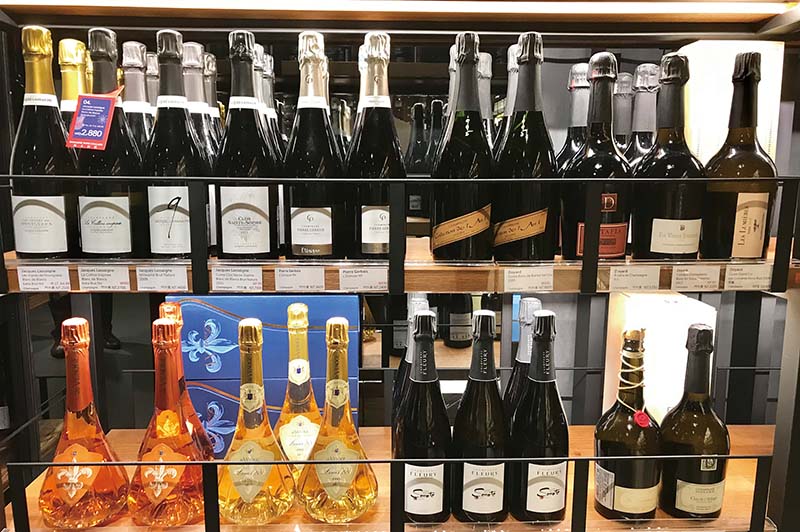 The mass market is growing fast, driven by Prosecco and Cava, while Champagne still dominates the high end.

Red wine has long dominated Taiwan’s wine market, buoyed by the brand power of Bordeaux and Burgundy. Most white and rosé wines have struggled by comparison.

Sparkling wine is an exception. Champagne has a strong brand here, though it is more of a niche market than Bordeaux or Burgundy. In recent years, less-premium sparkling wines, such as Italy’s Prosecco and Spain’s Cava, have made inroads on the back of aggressive marketing in hypermarkets and supermarkets. Entry-level Champagne is even sold now in some convenience stores.

Since 2014, Taiwan’s overall sparkling wine imports have grown about 15% from 962,365 liters a year to 1.07 million, according to data compiled by the Chinese-language Wine & Spirits Digest. Imports from France, which are almost entirely of Champagne, have risen 26%. Italian imports – mostly Prosecco – have grown 47%. Cava from Spain has grown the most at 79%, but also started at the lowest baseline.

“People are realizing that that there are other sparkling wines besides Champagne,” says Wine & Spirits Digest editor Steven Liu. “Carrefour and RT Mart import a lot of Prosecco and sell it for NT$300 to NT$500 a bottle. The price is reasonable.”

The bubbles in sparkling wine temper its acidity, so Taiwanese find it more quaffable than still white or rosé wine (often written off as “sour”), Liu says.

Compared to a humble Prosecco or Cava, Champagne can be intimidating. It is the most elegant, refined, and complex of effervescent wines. It has the reputation of being the wine of royalty, best enjoyed with caviar or oysters in regal surroundings.

Unlike other sparkling wines, Champagne is the product of only a single locality – its namesake region of France. Sparkling wine made elsewhere cannot be called “Champagne,” even within France. For instance, sparkling wine made with the same fermentation method as Champagne but produced in Alsace, Loire, Burgundy, and several other regions of France is called Crémant.

While Champagne is a luxury product, it can be enjoyed with ordinary food. As with any wine pairing, the key is finding food that highlights the wine’s character. In Champagne’s case, there are some surprising results.

David Pan, president of Domaine Wine Cellars, a Taipei-based retailer specializing in Champagne, likes to drink it with fried foods such as French fries or fried chicken. “The acidity cuts through the oil and complements the saltiness of the fried foods, while the bubbles help refresh your palate,” he says.

Just skip the condiments: no honey mustard on the chicken fingers or ketchup on the fries. You don’t want to drown out the Champagne’s flavors, Pan advises.

Domaine Wine Cellars is Taiwan’s largest importer and retailer of Grower Champagnes, which are made exclusively from an estate’s own grapes to reflect the local terroir. In contrast, big Champagne houses like Moët & Chandon source their grapes from hundreds or even thousands of small farmers, blending the grapes to develop a consistent house style.

“Taiwanese have discovered that Champagne is very versatile and can be made in a wide range of styles,” Pan says. “Rosé Champagnes can even be paired with pizza and Cantonese roast duck or pork and is often better for some occasions than red wine, usually the default choice in Taiwan.” Champagne also goes down more easily because it is refreshing and has a lower degree of alcohol than red wine. A bottle can be comfortably finished by two people in one sitting.

Grower Champagne began gaining market share in Taiwan five to six years ago, says Tom Curry, director of international wine programs at the Taiwan Wine Academy, which offers a course that prepares students for the WSG Champagne Master program. “Young Taiwanese are more discerning,” he says. “They care more about what the wine tastes like than does the older generation.”

However, “most people drinking Champagne in Taiwan are still drinking labels,” Curry adds.

A visit to the Taipei City Hall branch of My9, a large wine and spirits retail chain, affirms his insight. Store manager Max Wang told me that Moët-Chandon is their best-selling Champagne. “Connoisseurs wouldn’t bother with Moët. It’s more of an entry-level Champagne,” he says. “But they do a huge amount of marketing,” he adds, pointing to the Moët gift display in the store.

I had Wang’s words in mind when I observed an enormous Christmas tree made of empty Moët-Chandon bottles near the entrance of the Marco Polo Lounge at Shangri-La’s Far Eastern Plaza Hotel: Champagne installation art.

Another Champagne that sells well at My9’s Taipei City Hall branch is Armand de Brignac, nicknamed “Ace of Spades” by rapper Jay-Z after he bought the Champagne house in 2014. The “ace” comes from the logo on the bottle. Armand de Brignac is on the pricey side, beginning at about NT$13,000 and going up to NT$30,000.

In that price range, “there are certainly better Champagnes, but Ace has a certain following, especially people who drink it in night clubs,” Wang says.

The good, the bad, and the ugly

There is an urban legend about sparkling wine – that it causes the worst hangovers. One reason given for this notion is that carbonation causes alcohol to be absorbed faster into the bloodstream. In fact, the speed of absorption is just one factor determining how one feels the day after. Quantity matters. So does alcohol content. Still red wine like Shiraz, for instance, is usually 14-15% alcohol, while Champagne is rarely more than 12%. Whether or not someone drinks on a full stomach also makes a difference.

Finally, the quality of the wine is paramount. “One of the reasons we always hear about Champagne hangovers being the worst is that people have that experience after drinking bad sparkling wine,” says Domaine Wine Cellars’ Pan. “If you spend an evening drinking Cook’s or Andre [low-grade sparkling wines from California], you’re not going to feel good the next day.”

I know exactly what Pan is talking about. Years ago, at a dinner held by a hard-drinking British wine importer in Taipei, I made the mistake of downing too many glasses of a cheap Lambrusco, a sparkling Italian red wine. A friend of mine at the table politely tried to warn me with subtle body language, but I missed his cues. I figured it was harmless enough, as it was mild tasting and not high in alcohol. I was wrong. The next day I felt like someone had given me a beating.

Good Champagne should not have that effect, oenophiles say. In fact, in France, which consumes half the world’s Champagne and produces all of it, there is a specific term used to describe the effects of the beverage, says Dominique Levy, a partner at importer Formosawine and holder of an officer rank in Ordre des Coteaux de Champagne, the official fraternity of the major Champagne brands.

“In France, we say Champagne makes one grisé, a more pleasant feeling than drunkenness, which we call noir (literally “black” or “dark”). Grisé means you feel happy and relaxed, but in control of your faculties.”

Levy sees potential for the sparkling wine market to further develop in Taiwan, but says Taiwanese first need time to learn how to better distinguish among the many types of sparkling wine now available on the market. “It’s similar to Chinese tea,” he says. “You can enjoy it casually, but it takes time to really learn how to appreciate it.”

[ Do Not Serve Alcohol to Minors ]

Home Videos The WORLD of WINE – Wine News. Cheap wine, tasting notes and cooking with wine The World of Wine – May 2021 … END_OF_DOCUMENT_TOKEN_TO_BE_REPLACED

How to visit Napa Valley on a Budget. In this video Carson and I explain a few ways to enjoy Napa on the cheap. Tip and advice about how to visit Napa … END_OF_DOCUMENT_TOKEN_TO_BE_REPLACED

Home Videos Get To Know Argentina Wine | Wine Folly If you love Malbec, Argentina is your ultimate wine region. But that’s not … END_OF_DOCUMENT_TOKEN_TO_BE_REPLACED