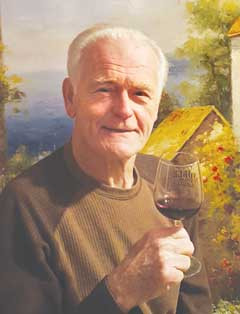 The unusual kinds of isolation that these pandemic times have visited upon us have sent me seeking wine experiences in some unusual places. In a monthly wine technical journal, I read of the importance of sanitizing oak barrels for reuse in making wine. That meant chasing down and eradicating pesky little microbes lurking in the grain of the oak barrel staves. Other exciting articles tell how and why you would want to start a vineyard in New Jersey and what eight new grape varietals can now legally be grown in Bordeaux. I think I needed to look somewhere else.

March is International Women’s Month, which has triggered a number of articles and stories about women’s achievements in many fields traditionally dominated by men. A woman in the military is flying combat fighter missions in the Middle East, and another has been made commanding officer of an aircraft carrier. Two Academy Award-nominated films have been directed by women. For the first time in history, our U.S. vice president is a woman. And our granddaughter, Isabel, is in her junior year at Caltech University on her way to becoming an astrophysicist.

I have written in this space about women in wine: Tuscany’s Albiera Antinori becoming the first woman in 26 generations to become president of this family’s 634 year old winery; Oregon’s Lynn Penner-Ash and Patricia Green making quality Pinot noir at their eponymous wineries; and California’s premium winemakers Helen Turley and Helen Keplinger.

This is the time of year when my thoughts turn to road trips to, or with, members of my family. And when I’m on the road, I track down the small, local wineries that can be found in every state. A commercial, bonded winery can be found in all 50 states. And I’ve said that some of them even make wine that is drinkable. It is fun to meet the winemakers and see the passion in their eyes for what they create.

Until I can mount a real road trip — and it is getting close as we get our second COVID-19 shots before the end of this month — I hit the road virtually, courtesy of the internet. Following up on an article I recently came across that introduced several new women winemakers, I ordered a bottle of Riesling from a young couple just starting a winery in Texas. Cheramie Wine 2019 Riesling is the first release from Cheramie Law and Todd Aho who, after being smitten by the winemaking bug, wanted to make an authentic Texas wine. And this bottle states that the grapes are 100 percent from the Texas High Plains.

Cheramie, whose name translates to “dear friend” in French, first became interested in wine when she was a Marine stationed in California. Upon her return home, she and her fiancé, Todd, made many trips into west Texas, tasting and talking with winemakers and grape growers who she found to be open, friendly and helpful. This 2019 Riesling is their first effort produced under their Salt and Pepper Wine Company. Cheramie explains the company name: ”I’m black, Todd’s white — salt and pepper are different, but they go together. We believe in together.”

When the wine arrived in Newport, we stood the bottle up in the refrigerator for 48 hours to recover from “bottle shock” after the trip from Texas. We were an informal panel of three tasters who have experienced Rieslings from Oregon, California and Germany’s Mosel and Alsace-Lorraine regions. The initial taste impression was of a pleasant Granny Smith green apple. But it went no further. Our consensus was that there was a lack of acidity that would have given the wine needed crispness. It had Riesling characteristics and would drink well on a warm summer day with a fruit salad on the patio. Only 85 cases were made. A rosé is on the way, and we hope that Cheramie will pursue her goal to make a good Texas wine.

Home Videos The WORLD of WINE – Wine News. Cheap wine, tasting notes and cooking with wine The World of Wine – May 2021 … END_OF_DOCUMENT_TOKEN_TO_BE_REPLACED

How to visit Napa Valley on a Budget. In this video Carson and I explain a few ways to enjoy Napa on the cheap. Tip and advice about how to visit Napa … END_OF_DOCUMENT_TOKEN_TO_BE_REPLACED

Home Videos Get To Know Argentina Wine | Wine Folly If you love Malbec, Argentina is your ultimate wine region. But that’s not … END_OF_DOCUMENT_TOKEN_TO_BE_REPLACED