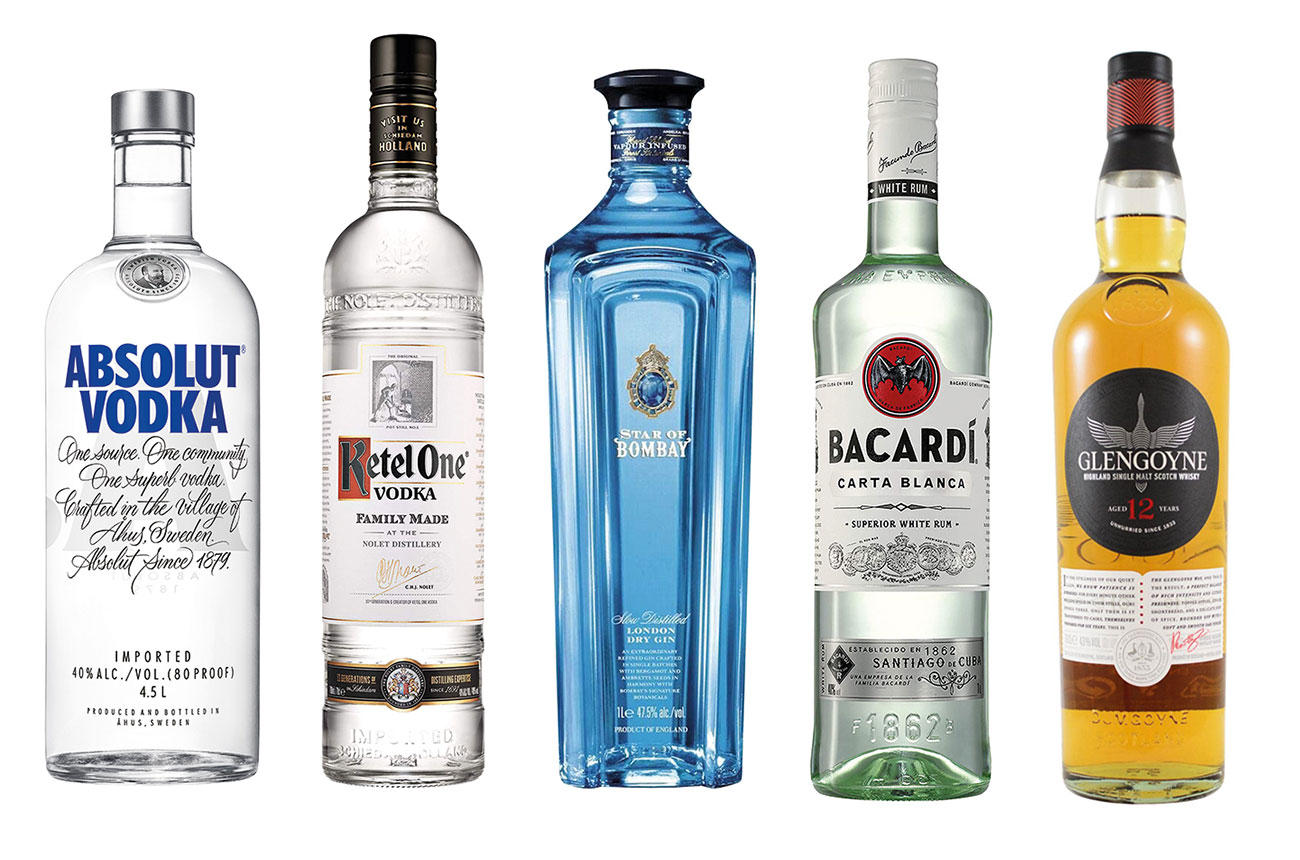 The process of manufacturing spirits can have a detrimental effect on the environment, if it isn’t done sustainably. Energy use, sourcing of raw ingredients and water management are among the key issues for producers to tackle. Then there’s packaging and distribution methods to consider, as well as dealing with waste.

The good news is that many distillers – big and small – are taking positive steps to reduce their environmental impact. From choosing sustainably sourced raw ingredients to woking with biomass boilers, using renewable energy and putting drinks into recycled packaging.

The following selection of brands – from vodka and gin to whisky, rum and Calvados – are worth seeking out for your eco-friendly drinks cabinet.

Sweden’s Absolut is made in the world’s most energy-efficient distillery. Located in Ahus, it’s carbon-neutral and aiming for zero-emissions, zero-waste and 100% recycling by 2040 – all while producing more than half a million bottles of vodka daily. With its iconic bottle design – based on an old medicine bottle – this is a versatile vodka with notes of grain, vanilla and liquorice on the palate. Great in a whole range of cocktails from Bloody Marys to an Espresso Martini. Alcohol 40%

Calvados is an oak-aged apple-based spirit, made in France. Production of Avallen is focused on preserving resources: it takes just 1.2 litres of water to make a bottle of Avallen, compared with 13 litres for the average bottle of bourbon for example. Each bottle actively removes 2.73kg of CO2 from the atmosphere, while the brand is also partnered with 1% for the Planet, donating to organisations and charities that are working to protect bees. In the glass you’ll find aromas of russet apple, green apples and toffee, with a light palate of sweet red apples finishing in a spicy kick. Pair it with tonic water or fresh apple juice and plenty of ice in a long serve. Alc 40%

Big player Bacardí operates a global initiative called ‘Good Spirited: Building a Sustainable Future’ which has so far led to a 32-tonne reduction of landfill waste and 90% less carbon emissions at its rum bottling facilities in the US. It works with sustainable sugar-cane farms, aiming for 100% sustainable sourcing by 2022. Carta Blanca is the original Daiquiri rum, used by American mining engineer Jennings Cox when he invented the cocktail recipe in Cuba. Light, creamy palate with notes of tropical fruit and vanilla toffee. Alc 37.5%

Bombay’s Laverstoke Mill distillery won a BREEAM award (recognising best practice for sustainability) for its design. Environmentally-friendly features include a biomass boiler that uses byproducts of the distillation process, while the distillery is run on renewable, low-carbon energy such as a hydro-electric turbine. The distillery also sits within a wetland conservation area. Star of Bombay is a premium, small-batch gin, with a punchier taste than the classic Bombay Sapphire. Alc 47.5%

Bullards stands out thanks to its innovative eco-refill pouch project: buy your first ‘bottle for life’ then top it up with pouches of gin, delivered by post. Pop the empty pouch (no envelope or stamp required) in the post box and it will be returned to the distillery, which works with TerraCycle to turn each pouch into plastic granules and that are upcycled into new products. Inspired by the Norfolk coastline, this gin has notes of seaweed and wet stone, like walking over rock pools. There’s a fresh, breezy salinity to the very creamy and textured palate, balanced by some sweet citrus and herb notes, plus a hint of chamomile tea, with a salt and black pepper finish. Makes a great G&T. Alc 40%

Turning trash into treasure is a full-time job for the distilling team at Discarded Spirits, who find clever ways to transform waste ingredients into quality spirits. Their vodka is distilled from grape pomace (the skins, stems and seeds left over from winemaking) and then blended with alcohol extracted from dealcoholised Chardonnay wine. The result is a smooth vodka, with fresh notes of green apple and creamy hints of pear and lychee, that works beautifully in a Vodka Martini. The range also includes Discarded Cascara Vermouth, a sweet style infused with cascara, the discarded fruit of the coffee berry and Discarded Banana Peel Rum, made with banana peel extract. The whole range comes in fully recyclable packaging. Alc 40%

Run by Ian Macleod Distillers, the Glengoyne Scotch distillery uses 100% renewable energy. Located in Dumgoyne, north of Glasgow, the distillery is set within its own wetlands and is a partner to the Wildfowl & Wetlands Trust, helping to convert CO2 and conserve nature. Matured in ex-Sherry casks, the 12 Year Old is (unusually) an unpeated Highland single malt, which is fruity on the palate and easy-drinking. Alc 43%

The Nolet Distillery in Schiedam, in the Netherlands, is powered by a giant wind turbine that’s disguised as a traditional Dutch windmill; the surplus energy it generates contributes to the national grid. Brand-owner Diageo has a sustainability policy that includes water management, reducing waste and using recycled packaging. Made from 100% GMO-free European wheat and distilled in small batches, it’s smooth and clean with a crisp citrus flavour and notes of honey, plus a long and lively finish that works well in a Vodka Martini. Alc 40%

Aiming to be the world’s most sustainable vodka, Koskenkorva is made from regeneratively farmed barley in Finland. Regenerative agriculture is a holistic cultivation method that aims to transform fields from emission sources of carbon into significant carbon sinks, thus mitigating climate change and protecting biodiversity. If all the farmers in the world transitioned to regenerative farming, it could potentially remove up to 322 billion tons of CO2 from the atmosphere. This single-estate vodka has peppery aromas and a smooth, creamy vanilla palate, with grassy notes and plenty of spicy kick on the finish. Alc 40%

The Two Drifters Distillery in Exeter produces a range of carbon negative rums, working with Climeworks and Carbfix to offset any CO2 produced. The electric distillery is run on 100% renewable energy, with electric delivery vehicles and carbon neutral packaging that features lightweight bottles and labels made from waste sugarcane fibres. Light golden brown in colour, the Spiced Rum has a sweet and spicy nose with banana toffee and tropical fruit. The light palate has dry, woody spice notes, plus hints of cardamom, aniseed and liquorice that linger on the finish. Works well in a Dark N Stormy cocktail with ginger beer and lime. Alc 40%

Flavourful vodkas: A matter of taste

Home Videos The WORLD of WINE – Wine News. Cheap wine, tasting notes and cooking with wine The World of Wine – May 2021 … END_OF_DOCUMENT_TOKEN_TO_BE_REPLACED

How to visit Napa Valley on a Budget. In this video Carson and I explain a few ways to enjoy Napa on the cheap. Tip and advice about how to visit Napa … END_OF_DOCUMENT_TOKEN_TO_BE_REPLACED

Home Videos Get To Know Argentina Wine | Wine Folly If you love Malbec, Argentina is your ultimate wine region. But that’s not … END_OF_DOCUMENT_TOKEN_TO_BE_REPLACED