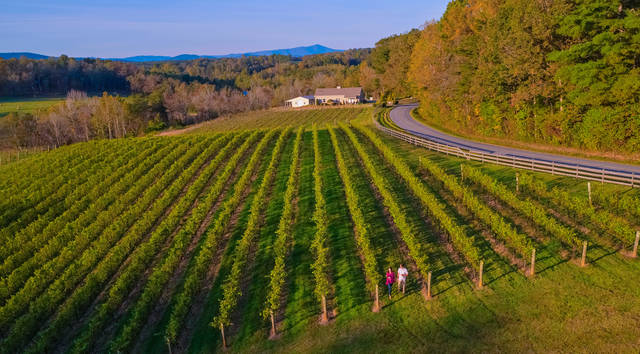 Certain businesses are considered recession-proof, and in that same vein could the local wine industry be pandemic-proof?

While no one has made such a declaration so far, it seems to be true based on four new wineries opening during a four-month period in 2020 along what is known as the Surry County Wine Trail. And no one will soon forget that this was the same year in which the coronavirus put a stranglehold on many other segments of the economy.

That bevy of openings also has allowed the Yadkin Valley trail to reach a milestone of 20 wineries altogether.

“As wineries, we are very nicely placed to serve the public right now,” said Melissa Hayes, who co-owns one of those establishments, Serre Vineyards, “because most of us do have a lot of outdoor spaces.”

The winery Hayes operates with husband Christian Krobisch opened in September, according to a list compiled by Craig Distl, who handles public relations for tourism attractions in the Yadkin Valley area.

Also among the four new operations are Pilot Mountain Vineyards in Pinnacle, which opened in August; Hidden Vineyard in Dobson, an October arrival; and the last one to debut during 2020, in November, Golden Road Vineyards in State Road, Distl noted.

“It’s a huge accomplishment to reach 20 wineries on the Surry County Wine Trail,” Jessica Roberts, executive director of the Tourism Partnership of Surry County, said in a statement.

Roberts told the Mount Airy Board of Commissioners at a meeting earlier this month that wineries have proven to be a solid part of the area tourist industry.

“The addition of these four wineries sets up our visitors for many new experiences and return trips.”

In January 2018, local tourism officials launched the Surry County Wine Trail with 15 wineries, which Roberts says was an immediate success and spurred an increase in tourists. This continues to pay dividends, with the latest spending-impact numbers from North Carolina’s official travel website showing that visitors to Surry spent almost $138 million in 2019 overall.

“The popularity of Yadkin Valley in general, and the Surry County Wine Trail in particular, is drawing folks to our area,” Roberts added.

“Visitors are excited about the number of wineries, which encourages them to stay longer and do more. They like that we have laid out the trail for them and made it easy to find their way around.”

Hayes, the Serre Vineyards co-owner, says 2020 wasn’t completely rosy in terms of getting the winery off the ground.

The owners were hoping to have it open last summer, but supply-chain issues and construction delays at the vineyard site on Beast Lane kept this from happening. “So were considered kind of waiting it out,” Hayes said.

However, they pressed on, resulting in Serre Vineyards’ opening in September.

By the end of last summer, people had grown weary of the pandemic and were seeking something to do, Hayes recalled, especially outside activities due to restrictions on inside gatherings.

“We can put tables and chairs pretty much anywhere,” she said of the wide-open spaces at Serre Vineyards, which boasts views of nearby Skull Camp Mountain and the Blue Ridge chain.

Until it simply became too cold to do so recently, customers tended to prefer to be outdoors rather than inside the winery, according to Hayes.

“It’s my full-time job,” she said of manning the operation.

Much the same story was reported by Chad and Crista Guebert, owners of Golden Road Vineyards, according to accounts provided by Distl.

They had planned to open much earlier in 2020, but pandemic-related challenges upended that desire.

“Everything was delayed by COVID, and we were just glad to finally open Thanksgiving weekend,” Chad Guebert said in a statement in which he referred to Golden Road’s addition to the wine trail. “I guess it was meant to be that we would be Number 20 in 2020.”

Golden Road, similar to many Yadkin Valley vineyards, adjusted its operational plan to focus on outdoor tastings. The Gueberts built an open-air patio featuring three fire pits and eventually added two more pits that can be pressed into service on their busier days.

“Even with the pandemic, people want to get out, and wineries are a good way to get out and stay distanced,” Crista Guebert observed.

A newly updated Surry County Wine Trail map brochure also includes four breweries and a distillery, plus information about vineyard lodging, the types of grapes grown in the region and a listing of annual events.

A digital version of the trail map brochure can be downloaded at www.YadkinValleyNC.com/guides or copies requested via mail.

Home Videos The WORLD of WINE – Wine News. Cheap wine, tasting notes and cooking with wine The World of Wine – May 2021 … END_OF_DOCUMENT_TOKEN_TO_BE_REPLACED

How to visit Napa Valley on a Budget. In this video Carson and I explain a few ways to enjoy Napa on the cheap. Tip and advice about how to visit Napa … END_OF_DOCUMENT_TOKEN_TO_BE_REPLACED

Home Videos Get To Know Argentina Wine | Wine Folly If you love Malbec, Argentina is your ultimate wine region. But that’s not … END_OF_DOCUMENT_TOKEN_TO_BE_REPLACED