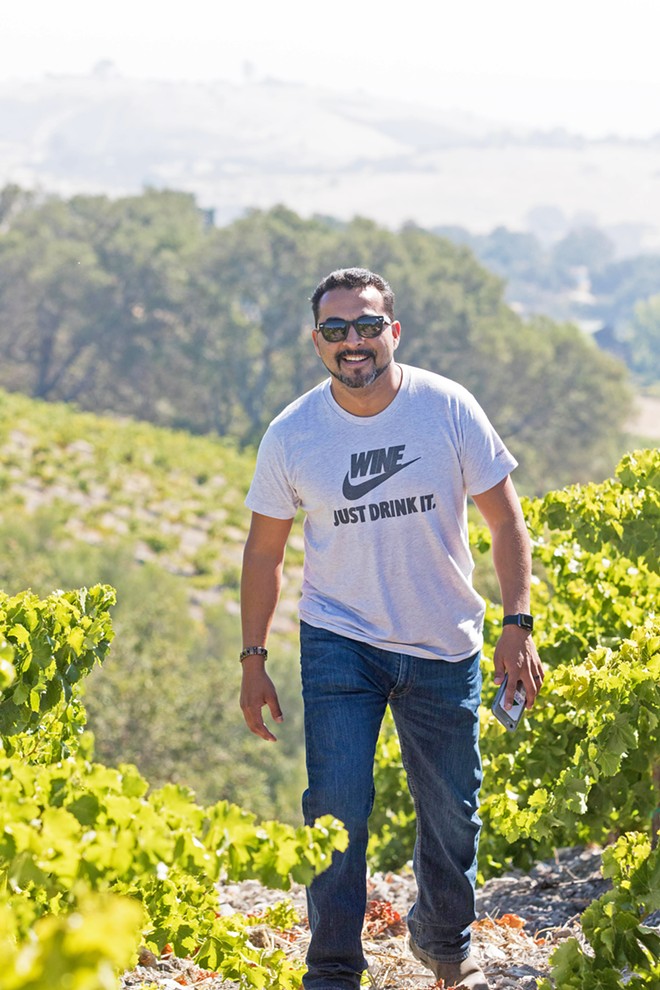 On just about every single business trip to wine events across the country, Edgar Torres hears himself explain to yet another person that California wines aren’t just made in the region that first made the state famous for wines.

He recalled being in Kansas City, Missouri, pouring his wine, Bodega de Edgar—which has focused on Central Coast-grown Spanish varietals since 2009—into people’s glasses. Several of them asked him if Paso Robles was in Texas.

“I still run into the headache of explaining where Paso Robles is. All they can reference is Napa,” Torres said. “I decided to kind of pay my respects to the place where I really started my wine career.”

So he started a second label, Straight Out Of Paso, highlighting the Rhone varietals that Paso does so well and the families and vineyards that make the region special. Those include J. Dusi, Paper Street (also J. Dusi), Rotta, and Denner vineyards. Dusi Vineyard started in the early 1920s in Paso, and Rotta Vineyard started in the late 1800s in Templeton. Both farm their grapes in a way that matches Torres’ approach to winemaking.

They don’t use a lot of chemicals and pesticides, and they’re respectful to the environment, he said. J. Dusi’s Paper Street Vineyard, for instance, dry farms grapes from head-trained vines, a hands-on approach to growing that stresses the vine and concentrates the flavors and sugars in the fruit.

“One of the fun things about winemaking is just really letting nature express itself. We really tie our hands to producing nothing but natural wines,” Torres said. “We’re not putting chemicals in there that shouldn’t be in there.”

Torres said if he has to add yeast, he does, but his wines are unfiltered and unfined. They don’t add anything to the wine to make it more aesthetically pleasing—to change its color or viscosity.

The Straight Out Of Paso project started in 2018, took off during the pandemic in 2020 with a focus on web sales, and was finally able to open a tasting room in downtown Paso Robles in February 2021. Next to California Coast Beer Company on Railroad Street, Straight Out Of Paso’s concrete, tree-shaded patio leads into a modern tasting room with a garage door that opens into the parking lot.

During a recent visit, Torres pulled out the cabernet sauvignon made with grapes from Rotta Vineyard; his zinfandel with grapes from J. Dusi Vineyard; and a white blend of roussanne, marsanne, and clairette blanche from Paper Street and Law Estate vineyards. He pointed out the labels, which are simple, each emblazoned with Straight Out Of Paso and a black-and-white image that conjures feelings of the West.

He said the whole idea is to highlight Paso, so the models he uses are from Paso, for instance a local cattleman on horseback. He said his next blend will be play on GSM (grenache, syrah, and mourvedre). The grenache, mourvedre, and carignan—GMC—will definitely have a GMC truck on the label, he said with a laugh.

Torres started his path to wine in 2002 at Villa Creek Restaurant in downtown Paso as a server.

“I was pretty much after college being a waiter, serving some good food and good wine, and I was in the middle of the Rhone explosion,” he said.

A lot of younger winemakers were coming into town with a passion for wine, and he said he was attracted to their punk-rock style of making wine. He decided against making the jump from Cuesta College to Cal Poly, in part, he said, because he was an undocumented immigrant at the time. Instead, he absorbed as much as he could about wine. 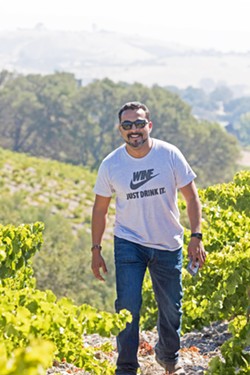 “I’ve been very blessed,” he said. “The life that I’m getting to live is kind of the idea of rags to riches.”

In 1989, when he was 8 years old, his family moved from Michoacán, Mexico, to Cambria, where he grew up. His father did the odds and ends that many immigrants do, working in landscaping, construction, and at a hotel. His mother did the same, primarily housekeeping and she worked at a hotel for about 15 years. Torres went to Coast Union High School and later played soccer at Allan Hancock College. He also attended Cuesta College and received a associate degree in liberal arts.

Ideally, he said, he wanted a career path where he earned a bachelor’s degree in psychology and eventually landed a job in law enforcement. Although Torres became a U.S. citizen in 2019, he hadn’t been in the country legally while he was in school, and he didn’t see the benefit of attending Cal Poly to graduate with a piece of paper that he wouldn’t be able to use.

“I have a lot of friends of mine that are officers, who tell me I made the right move,” he said with a laugh.

While still working at Villa Greek, he learned to make wine at Garretson Wines with fledgling winemakers like Jacob Toft. Toft was one of his first mentors, teaching Torres the ins and outs of cleaning and fermentation. Torres and his friend Sean Mitchell, who used to sell a lot of Paso wines in Southern California, would spend late nights barrel tasting. 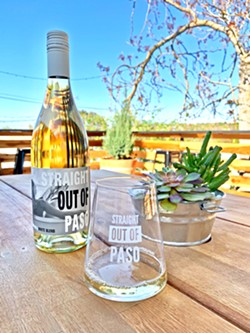 “I would always say how much I loved grenache,” Torres said. “He was kind of the one who really kind of fine-tuned my palate a little bit and really helped me with getting my own thing going.”

Torres said that with a little help from his friends, he managed to purchase four barrels and produce his first wine—a grenache, which he called garnacha for his ode to Spanish wines, Bodega de Edgar. In 2019, Bodega de Edgar bought a new building that’s retrofitted as both a tasting room and winery, which is where Straight Out Of Paso is made.

With Straight Out Of Paso’s downtown tasting room finally open, Torres said they have plans to start bringing live music to the patio once a week, now that COVID-19 pandemic restrictions are starting to loosen up. You can find the latest happenings on Instagram @straightoutofpaso. Δ

Home Videos The WORLD of WINE – Wine News. Cheap wine, tasting notes and cooking with wine The World of Wine – May 2021 … END_OF_DOCUMENT_TOKEN_TO_BE_REPLACED

How to visit Napa Valley on a Budget. In this video Carson and I explain a few ways to enjoy Napa on the cheap. Tip and advice about how to visit Napa … END_OF_DOCUMENT_TOKEN_TO_BE_REPLACED

Home Videos Get To Know Argentina Wine | Wine Folly If you love Malbec, Argentina is your ultimate wine region. But that’s not … END_OF_DOCUMENT_TOKEN_TO_BE_REPLACED