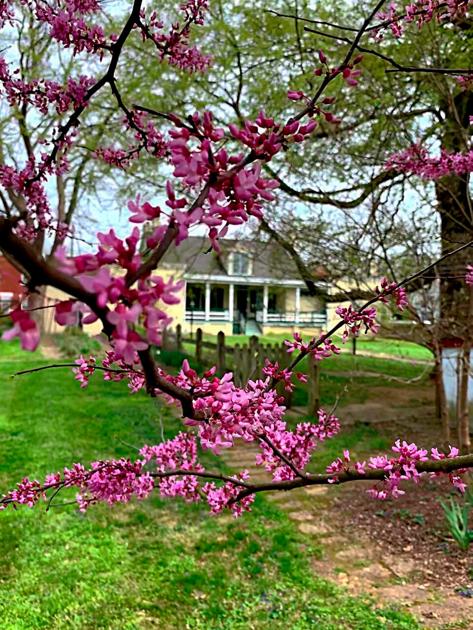 With over 300 years of history, Ste. Genevieve is the state’s only National Historic Park.

Located about 60 miles south of St. Louis, this town is the last French colonial village still surviving in America, as well as the site of the first European settlement west of the Mississippi River.

It is known for its iconic poteaux-en-terre architecture, with roots that can be traced back to France and are visible in the construction of many houses there from the same period.

Poteaux-en-terre can be translated to mean ”post in earth.” It is a type of construction using timber framing with reinforced mud walls.

“The style of the architecture came out of Normandy, France,” said Chris Collins, the superintendent of the Ste. Genevieve National Historic Park. “It made its way over to New France in Quebec and then down the Mississippi River.”

Best known for this style is the Amoureux House, which features vertical posts planted directly in the ground while holding up the roof of the front porch.

One of three buildings with this architectural style in Ste. Genevieve, it was built in 1792 for Jean-Baptiste Bauvais. Only five poteaux-en-terre buildings remain in North America.

“It was really unique versus what some of the other Europeans did,” Collins said. “The French like to build their houses using vertical instead of horizontal logs.”

Along with the poteaux-en-terre style, buildings were also constructed in the poteaux-sur-sol, or “post on sill” style. Rather than being planted in the ground, the vertical posts are instead planted on the edge of the porch.

This can be seen in the Jean-Baptise Vallé House, which was built in 1794 and named after the final political and military leader, or commandant, of Ste. Geneviève prior to becoming a part of American territory in 1804. Giving up his post as Commandant, Vallé peacefully transitioned into roles as a civil leader and businessman in the community.

Both of the buildings are now owned by the National Park Service and open to visitors.

The town has been home to many different groups throughout the years. Although first settled by the French, the exact year is a topic of much debate among local historians, with some saying 1735 and others 1750.

The abundance of salt from the spring near Saline Creek was a major attraction for settlers, as well as the fertile soil that was prime real estate for agriculture.

Proximity to the river was beneficial as a water source for homes and commerce, but it also caused massive flooding. The town relocated to a higher elevation in 1785, its current location.

“There have been many waves of immigration throughout the community,” Collins said.

“It started with the indigenous people who were here before the French arrived in the 1700s. Then there were waves of Germans, British Americans and so forth.”

The town became a melting pot for many cultures, which was emblematic of the country as a whole during this time period.

As such, the culture and cuisine in the town reflect its diverse history.

Tourism remains a major economic driver in the town, with a range of niche offerings and specialty businesses in the downtown area.

Lodging is available in town, as well as local restaurants and wine tasting rooms with vineyards just a short distance outside of town.

Home Videos The WORLD of WINE – Wine News. Cheap wine, tasting notes and cooking with wine The World of Wine – May 2021 … END_OF_DOCUMENT_TOKEN_TO_BE_REPLACED

How to visit Napa Valley on a Budget. In this video Carson and I explain a few ways to enjoy Napa on the cheap. Tip and advice about how to visit Napa … END_OF_DOCUMENT_TOKEN_TO_BE_REPLACED

Home Videos Get To Know Argentina Wine | Wine Folly If you love Malbec, Argentina is your ultimate wine region. But that’s not … END_OF_DOCUMENT_TOKEN_TO_BE_REPLACED