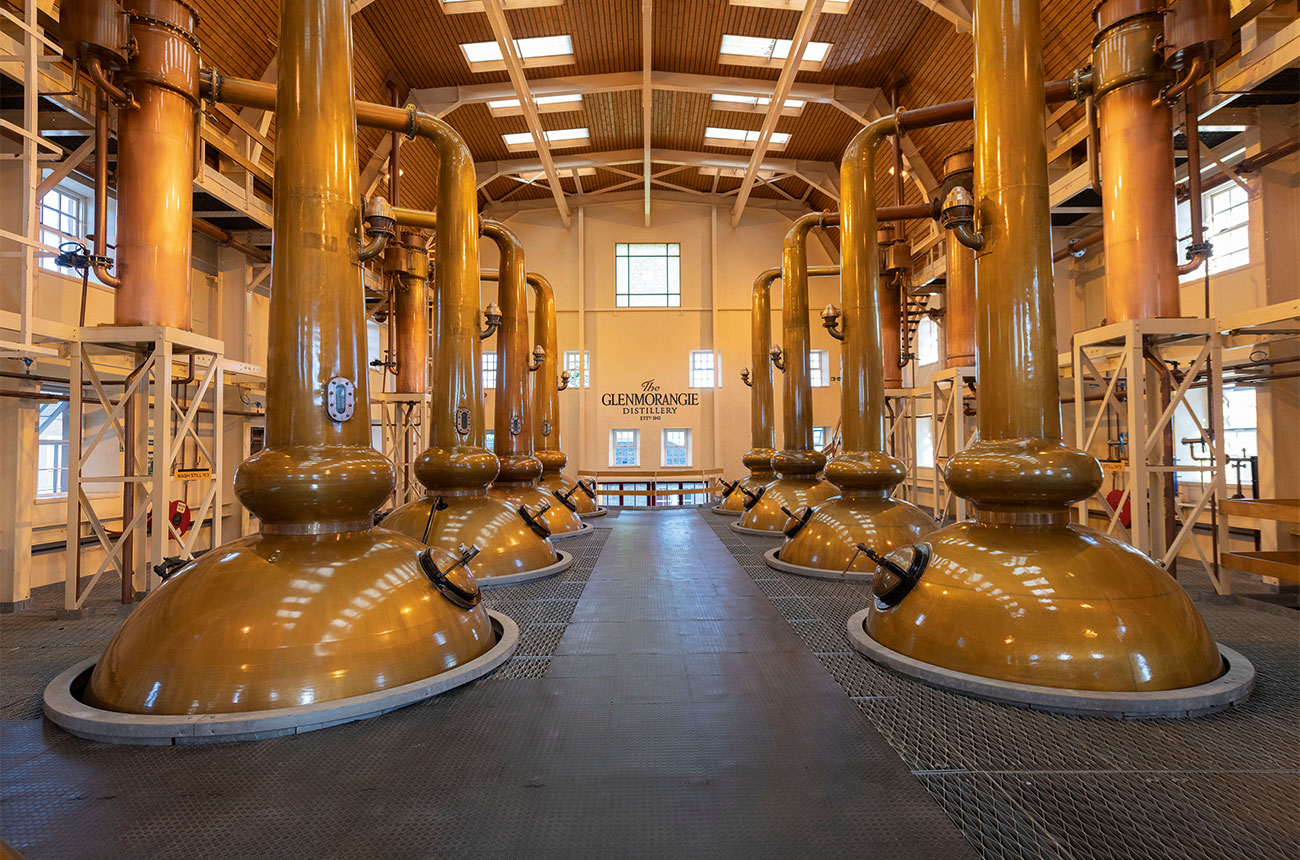 With the prospect of holidays abroad an unknown one due to the pandemic and what travel restrictions will be in place, many are looking to staying on UK shores this summer.

But where to go? Cathedrals and stately homes are all very quintessential Britain, but hardly new. The beach? Maybe, but bring your rug and thermos flask – summer’s behind us. No, if you’re looking for fresh ideas when it comes to a day out, turn your attention to the multitude of innovative drinks companies that are making a name for themselves, and for British produce.

Britain’s drinks industry is booming, quality has never been higher – and we’re not just talking about wine. Vineyards, gin and whisky distilleries, cider farms and breweries all have tourists firmly in their sights, and have started throwing their gates open to showcase their produce and sell direct. You used to be a damned nuisance, getting in the way, falling over things, breaking stuff. But now the light has dawned. You’re all valuable customers! And you’re worth far more than just the entry fee, a coffee in the café, and a spending spree in the gift shop: you’re a guest, a friend, a fan, an aficionado. Here, madam, get your nose into our bubbles. Much better than French, eh?

It’s a win-win. They hopefully get a loyal future customer. And you get a great day out. A story told with passion. A beautiful location. And at the end of the tour? A taste of the product, but with expert commentary.

Here is a taster of what’s there, waiting to be discovered around Britain. Fill, swill, let a little air in. Don’t breathe in, though, and don’t spit – this is polite society! But do always phone in advance to check availability…

Visually this is one of the most astonishing places in the drinks industry. An early Georgian paper mill which once made banknote paper for the Bank of England, Laverstoke ceased production in 1963 and was chosen as the home of Bombay Sapphire in 2010. Bombay Dry was originally Greenall’s Dry repackaged for the US. By 1986 it was flagging, but rather than drop it, its owners decided on a truly protean upgrade. New name, new bottle (blue, naturally), new botanicals including cubeb and grains of paradise, and new Carterhead stills for production created a gin that was softer, richer, rounder and fatter than old-school London dry. It was still being made at Greenall’s in Warrington in 1998 when Bacardi bought the brand, whose stablemates include Bombay Original Dry and Star of Bombay.

After a long hunt for a new home, Bacardi settled on Laverstoke Mill, literally straddling the river Test in Hampshire. It was an inspired choice of site, which has been treated with the utmost respect. The Test is one of the purest chalk streams in Britain, legendary for brown trout, otters, herons and kingfishers. The redevelopment has been a model of sensitivity. The buildings were carefully taken down and their bricks and tiles reused. In their place are the extraordinary curving glasshouses where the botanicals grow. A water turbine helps power the distillery, as do solar panels. Distilling uses a colossal amount of coolant but Bombay Sapphire takes none from the Test: instead it harvests rainwater. It’s both a beauty and a marvel to behold.

A range of tours and experiences include a gin cocktail masterclass and a supper club.

Hush Hall dates back to 1503 and is set in 167ha of unrivalled beauty. The manor house and gardens are the private home of Hotel du Vin entrepreneur Richard Balfour-Lynn and his family, and are out of bounds; but the endless rolling green of the Weald of Kent countryside with its oak woods and wildflower meadows is yours to wander.

The woods cover more than 80ha, so you might say that Hush Heath was a forest with some vines rather than a vineyard with some forestry. The family bought it in the 1980s and planted 8ha of orchards. The first vines were planted in 2002, and as the Wealden clay and the microclimate were perfect for the classic Champagne varieties, there are now 20ha of Chardonnay, Pinot Noir and Pinot Meunier.

The visitor centre and winery, built in Scandinavian style in 2010, showcase the traditional method by which top English sparkling wines are made.

Hush Heath’s signature wine is Balfour Brut Rosé, but it has other strings to its bow: other sparkling and still wines, bottle-fermented apple wines and even a microbrewery. After an educational walk in the vineyards, orchards and woodland, and a short film on winemaking, enjoy a tutored tasting in a tasting room aptly named The View, overlooking the woods you’ve just spent hours tramping through. You’ll never want to leave.

Heck’s provides an authentic cider farm experience, as well as its range of delicious apple and pear juice products – fermented or otherwise

Once upon a time, the roads of England’s southwest were lined with scrumpy farms that made cider for their own use and sold their surplus to passers-by. Then, in 2005, a new law made off-licences compulsory for anyone wanting to sell alcohol – but very few farmers bothered to apply for one.

One that did was Heck’s, whose location near both Glastonbury and the old Clarks shoe factory in the village of Street, now a popular shopping centre, persuaded the family to continue a tradition going back to the 1870s.

But the business had to become more commercial to survive. The family was already selling single-variety juices; now it broke with the orthodoxy that no single strain of apple was able to make decent cider, which could only come from blending. Today, Heck’s makes 15 single-varietal ciders; two of them, oh heresy, from eating-apples. That’s not the only change: you can still get your cider in ye olde- worlde plastic flagons if you must, but you don’t have to – Heck’s has a bottling line.

The place still feels nicely rustic, though: a working farmyard studded with odds and ends of equipment, ancient and modern; the shop no more than a barn, really, with bits of arcane ironmongery – bullticklers, troutspears and suchlike – hanging on rough stone walls; barrels in sturdy tiers; jars and jars of chutney/ pickle/ preserve; cheese – so much cheese! No interactive displays; no DVDs voiced in drama-school ‘Mummerset’ accents – just stuff you want to eat, stuff you want to drink, all real, all good.

When Bavarian-born Petra Wetzel’s dad came to visit her in Glasgow and wasn’t all that impressed with the beer, she decided to put matters right by starting a brewery of her own. And to ensure that the old boy would like her beer, she stuck to the Bavarian Reinheitsgebot or purity law of 1516, banning the use of any ingredients except malt, hops, water and yeast.

She also tried to use ingredients as close to the German original as she could get. Soft brewing liquor comes from Loch Katrine; her malt is mostly British, but she does import some from Germany; her hops are mainly Hallertau, one of the ‘noble’ varieties used by German and Czech brewers. The house yeast is an imported bottom-fermenting strain that is skimmed and propagated after each brew.

West Brewery’s very striking home is an 1890s carpet factory designed in imitation of the Doge’s Palace in Venice, although it overlooks a green rather than a canal. It incorporates a stylish bar and restaurant, West on the Green, which has become a popular wedding venue. It also boasts a spacious courtyard and two separate brewhouses. There are a number of different tours to enjoy, including the West Experience, which ends with a three-course meal. Private tours can be arranged.

The river Wye runs close to the Parva Farm vineyards

The Wye Valley inspired one of Wordsworth’s loveliest nature poems: Tintern Abbey. Perhaps when you visit Parva Farm, in south Wales near the river Severn, you might carry a copy as you stroll among the vines, for you may be as enraptured by the scenery as was the poet. It’s also likely that this spot enraptured the monks of Tintern: there are few sites nearby as suited to vines, so this may well be where they grew the grapes for their communion wine.

Today’s vines date back mostly to 1979, when the 1.6ha vineyard was planted with Bacchus, Müller-Thurgau, Seyval Blanc and Pinot Noir to become the first commercial vineyard in Wales. In 1996, Colin and Judith Dudley added Regent to make a Pinot rosé as well as a better red. Including a demonstration yard, Parva Farm now has 4,500 vines of 17 varieties. The Dudleys make an intriguing range including a sparkling wine, Dathliad (Celebration), and a mead (or more strictly a piment) based on Seyval Blanc, also the base for a dessert wine flavoured with summer fruits. More recently they’ve started cidermaking using apples from the farm and from the organic orchard next door, fermented in wine casks.

The shop doubles as a sampling room where tutored tastings are given after guided tours. It sells all the farm and winery products and other local provender. No café, but the Wye Valley Hotel is immediately across the road. Alternatively bring a picnic to enjoy while you:

‘…repose… and view These plots of cottage- ground, these orchard-tufts,

Which at this season, with their unripe fruits,

Are clad in one green hue, and lose themselves ’Mid groves and copses…’

Glenmorangie (pronounced in the same way as the fruit) is one of the aristocrats of malt whisky and stands out from the crowd not just for its name, but also because of the height of its 12 stills, which at 16’ 10” (5.13m) are the tallest in Scotland. The distillery was a brewery until 1843, when it was converted using pot stills from a gin distillery which was going over to the newfangled column stills.

Tall stills and long necks increase the contact the spirit and vapour have with the copper [from which the pot stills are made], turning sulphites into sulphates to create a purer, lighter-bodied spirit. Exactly what you want with gin, but not with whisky: to compensate, Glenmorangie has long been maturing and finishing its whisky in old Port, Sherry or Madeira casks.

Whisky distillers, when they want to replace a still or add a new one, generally install an exact replica of the original in order to safeguard their product’s distinctive character, and that’s what has happened here. What you see here is therefore the nearest thing on earth to an early 19th-century gin distillery.

But Glenmorangie has never been backward. It was the first to switch from direct-fired stills to steam-heated: the steam engine is the star exhibit in the museum. It is also at the forefront of the whisky industry’s green revolution: all its waste is converted into biogas to supply 20% of the distillery’s energy.

After a distillery tour and tasting, you can go the whole hog and book into Glenmorangie House hotel for the night: a 17th-century house set among the ruins of an old castle, and overlooking the shores of the Moray Firth.

This article was first published in the November 2020 issue of Decanter. The introduction has been edited for Decanter.com.

Former editor of the CAMRA newspaper What’s Brewing, Ted Bruning is a journalist and author in the licensed trade and drinks industry press. He is co-author with Rupert Wheeler of Britain in a Bottle: A Visitor’s Guide – £12.30 Amazon UK / £16.99 Waterstones

Home Videos The WORLD of WINE – Wine News. Cheap wine, tasting notes and cooking with wine The World of Wine – May 2021 … END_OF_DOCUMENT_TOKEN_TO_BE_REPLACED

How to visit Napa Valley on a Budget. In this video Carson and I explain a few ways to enjoy Napa on the cheap. Tip and advice about how to visit Napa … END_OF_DOCUMENT_TOKEN_TO_BE_REPLACED

Home Videos Get To Know Argentina Wine | Wine Folly If you love Malbec, Argentina is your ultimate wine region. But that’s not … END_OF_DOCUMENT_TOKEN_TO_BE_REPLACED