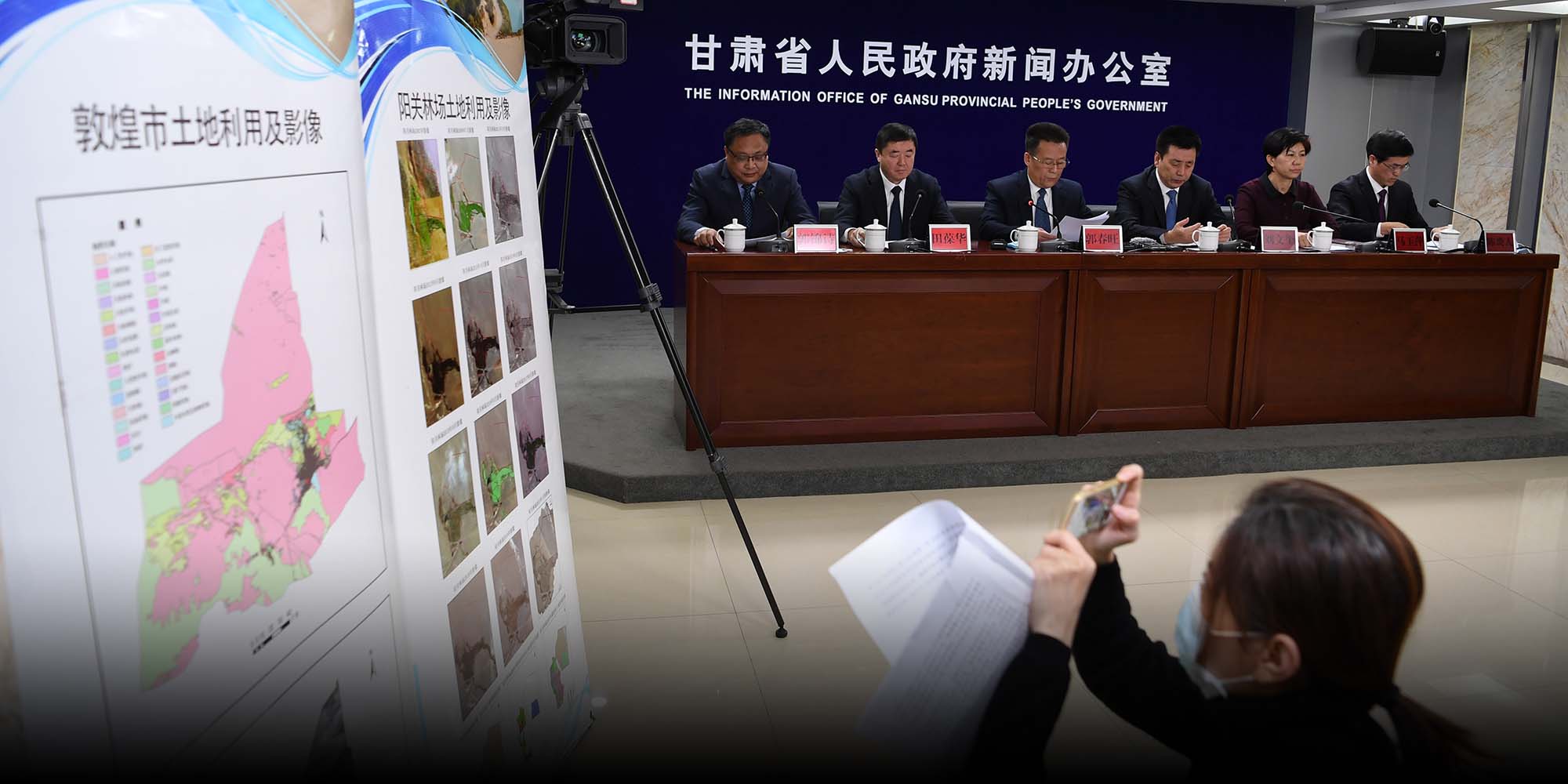 Inspectors from China’s top environmental authority are investigating a state-owned forest farm in the northwestern Gansu province after domestic media reported that hundreds of trees may have been axed to make room for vineyards over the past two decades.

On Thursday, the Ministry of Ecology and Environment said its team is using satellite images and drone photography to assess the possible impact of grape cultivation near the forest areas planted to protect the historical city of Dunhuang. Since the turn of the century, the local government has initiated plans for farms to plant and maintain forests in the area, which is vulnerable to desertification.

Last week, reporters from Beijing newspaper Economic Information Daily uncovered that the forest area within the farm had been shrinking over the past two decades. The report claimed that trees began gradually disappearing after Dunhuang Yangguan Forest Farm — the state-owned entity tasked with maintaining the forests — leased its land to contractors to grow grapes in 2000, with the money generated from such deals becoming its main revenue source.

The so-called protection forests in Dunhuang Yangguan Forest Farm were designed to minimize the impact of desertification and serve as ecological shields for the city on the outskirts of the Kumtag Desert. But experts say large-scale grape plantations increase desertification risks, as they require large amounts of water.

Between 2000 and 2017, the protection forest area shrank from 20,000 mu to 5,000 mu (roughly 1,300 hectares to 300 hectares), while the vineyard expanded to cover more than 10,000 mu, according to the article. Reporters also found that some trees in proximity to the farms were either felled or burned.

A forestry professor who requested anonymity because he was not authorized to speak to the media said chopping down degraded trees is part of the maintenance process for artificial protection forests, but it requires expert assessment to determine whether trees have degraded and need to be reforested. The impact needs a scientific assessment from experts on the ground, he added.

Responding to the media report and the ensuing public backlash, Gansu’s provincial government denied any large-scale reduction in forest area since 2000 during a press conference Tuesday — though provincial inspectors have noted the farm has poorly managed forests and lacked scrutiny in leasing land to companies. A top-ranking official said the conclusion was based on a comparative analysis of satellite remote-sensing data from over the years.

“There has only been over 6,000 mu of protection forest within the forest farm for a long time,” Guo Chunwang, deputy secretary-general of the Gansu provincial government, said at the press conference.

But on Wednesday, Economic Information Daily debunked these claims by publishing screenshots of reports from local authorities documenting the actual land area. The official documents showed that the Dunhuang Yangguan Forest Farm had planned 13,300 mu of land for protection forests, which now includes the vineyards.

An official surnamed Yang at the Gansu Forestry and Grassland Administration told Sixth Tone that the forest area figure stated by the provincial government during Tuesday’s press conference is accurate but declined to comment further.

On Thursday, the Ministry of Environment and Ecology said it plans to release all relevant information after concluding its investigation.

Home Videos The WORLD of WINE – Wine News. Cheap wine, tasting notes and cooking with wine The World of Wine – May 2021 … END_OF_DOCUMENT_TOKEN_TO_BE_REPLACED

How to visit Napa Valley on a Budget. In this video Carson and I explain a few ways to enjoy Napa on the cheap. Tip and advice about how to visit Napa … END_OF_DOCUMENT_TOKEN_TO_BE_REPLACED

Home Videos Get To Know Argentina Wine | Wine Folly If you love Malbec, Argentina is your ultimate wine region. But that’s not … END_OF_DOCUMENT_TOKEN_TO_BE_REPLACED