Limited late-night opening will be permitted at a new venue in Stanmer Park selling Sussex wines.

The One Garden, a project run by Plumpton College in Stanmer Park, originally applied for a 1am licence to serve alcoholic drinks at its café as well as off-sales from its shop.

They raised concerns about the proposed late-night licence, which initially included music and live performances.

However, this element of the application was withdrawn before a council licensing panel met to decide the matter yesterday (Tuesday 27 April).

After discussions with Sussex Police, the college asked to be able to stay open until 11pm from Sunday to Thursday.

Green councillor Martin Osborne, who represents Hollingdean and Stanmer ward, spoke on behalf of residents against the proposed 8.30am start and 1am closing at weekends.

Councillor Osborne said that he welcomed One Garden and the changes made before the hearing but he was concerned about the weekend late nights and early start each day.

He said: “I see no reason for the sale of alcohol from the early morning from 8.30am through to midday.

“Late-night sales into the early hours of the morning, I believe, will keep customers at the premises (and) could increase the likelihood of anti-social behaviour.

“My main concern is for the residents of the stable block and the courtyard but also the village as I think this will cause additional noise and traffic.”

Councillor Osborne said that One Garden could use “temporary event notices” for occasional later events.

Claire Whelan, who lives in the neighbouring Old Stable Block, said that late-night events would cause a disturbance for residents, particularly if taxis or drivers picking people up drove along the unlit road past their homes.

Mrs Whelan said: “I just don’t really understand why there would need to be a licence until one in the morning.

“I like the idea of this, and applying for a temporary one as and when it’s needed, but not having the blanket option to do that two days a week every single week.”

Labour councillor Jackie O’Quinn spoke in her capacity as chair of the Brighton and Hove Estates Conservation Trust, representing Stanmer Village residents and the park.

She said that she was enchanted by the plans but had “naively” expected a garden centre café that would close at around 5.30pm offering cream teas.

Councillor O’Quinn said: “I was really quite shocked when I saw the application for the café – and it’s a café bar really. It has huge ambitions.”

Councillor O’Quinn said that the village residents would be just as disturbed by the venue’s activities as would those living in the neighbouring stable block.

One Garden’s commercial manager Richard Ayres said that the garden was open 340 days a year and the business helped support the free element.

The shop would also sell beer from local breweries, with the cheapest priced at £4 a can or bottle.

The café would sell the Plumpton produced wine by the glass for the first time. 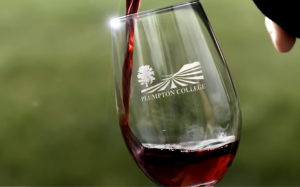 Events planned in the coming weeks included live music, a children’s performance and ballet in the park.

Mr Ayres said that the later evening opening would coincide with wine tasting evenings. And it was also hoped to invite restaurant companies along to host pop-up evenings.

Plumpton College vice-principal James Hibbert said: “It’s not a rock concert venue. We would be comfortable with restrictions on the licence that prevent us from doing such things.

“But we do want the opportunity to earn revenue from One Garden Brighton because there are days when it is subsidised.”

He said that One Garden was primarily a learning venue for the horticultural students to see the full commercial cycle of their work.

The licensing panel, made up of three councillors – Carmen Appich, Chris Henry and Clare Rainey – noted in their decision that those making representations wanted changes to the hours and measures to deal with noise rather than for the application to be “rejected outright”.

They approved a licence to start from 9.30am, with late-night events until 1am limited to 12 times a year – the equivalent to one a month. Temporary events notices could enable One Garden to host a few more late-night events.

Off-sales from the shop should end at 9pm on all other days unless a wine-tasting event is taking place. Alcohol can be served in the café until 11pm.

To reduce noise and the impact on neighbours, visitors will be required to leave One Garden by a side gate after 5.30pm.

In their decision, the councillors said: “The panel accepts that One Garden Brighton is an innovative development. Nothing similar is to be found anywhere else in the city and, to that extent, it is exceptional.”

Home Videos The WORLD of WINE – Wine News. Cheap wine, tasting notes and cooking with wine The World of Wine – May 2021 … END_OF_DOCUMENT_TOKEN_TO_BE_REPLACED

How to visit Napa Valley on a Budget. In this video Carson and I explain a few ways to enjoy Napa on the cheap. Tip and advice about how to visit Napa … END_OF_DOCUMENT_TOKEN_TO_BE_REPLACED

Home Videos Get To Know Argentina Wine | Wine Folly If you love Malbec, Argentina is your ultimate wine region. But that’s not … END_OF_DOCUMENT_TOKEN_TO_BE_REPLACED