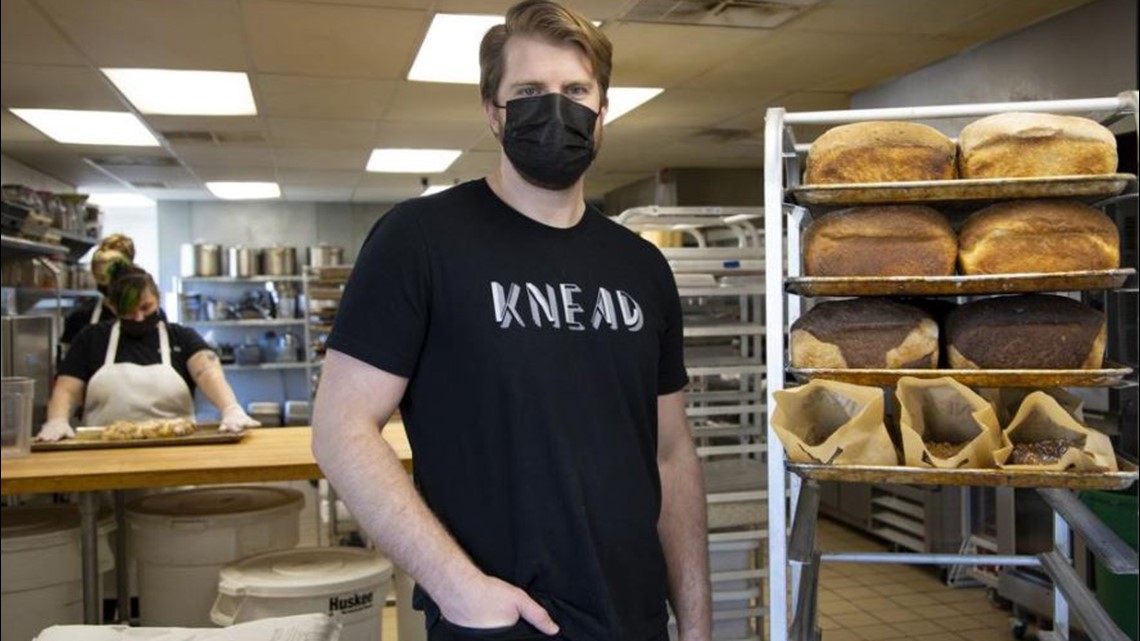 “In late high school and early college, I used to brew small-batch beers with my brothers and dad just as a hobby,” Brown said.

ST. LOUIS — Food has always been an important part of A.J. Brown‘s life, starting as a kid growing up in Wentzville with his two older brothers and his parents. Brown’s family spent the majority of their time together in the kitchen and he quickly developed a passion for it.

This led Brown — today the co-owner and baker behind Knead Bakehouse + Provisions — to obtain a nutrition and food science degree and to pursue fermentation science in the beverage industry.

“In late high school and early college, I used to brew small-batch beers with my brothers and dad just as a hobby,” Brown said. “So I always enjoyed the scientific aspect of food.”

This led to jobs with O’Fallon Brewery and Noboleis Vineyards in Augusta before Brown decided he really missed being in the kitchen. He attended culinary school in Lyon, France, before opening Knead Bakehouse + Provisions in 2017 in the Lindenwood Park neighborhood.

The bakery, known for its sourdough bread, has become a hotspot in the St. Louis food scene.

You started your food career in the beverage industry. Tell us about that. I went to Benedictine University and played basketball there. I studied nutrition and food science because I always had a passion for food, just growing up with my family. We spent a lot of family time cooking together so that passion developed even back then. I worked at O’Fallon Brewery first, and then I moved on to Noboleis Vineyards, which was one of the newer breweries at the time. This was in about 2011 or so. I studied making wine there and I thought that was what I was going to be doing. But I missed food and realized I really wanted to be in the kitchen. I went to France and studied at the Institut Paul Bocuse there, which trained chefs for Michelin-starred restaurants.

What was that experience like in France? Looking back at it, it was such an incredible experience. But I didn’t speak any French. Luckily the classes were in a kind of French/English mix. The school was focusing at the time on bringing international people over to create a culture of a melting pot. They wanted to create a program where English was the primary language spoken. I was one of 10 total in the class, but one of two Americans. There were people from Germany, Italy and Portugal. It was definitely a growing up experience. It made me realize that I could go and do anything on my own.

How did you get started with Knead Bakehouse? I started by growing our own sourdough starter and I started selling loaves of bread at local farmers markets. I brought 50 loaves of bread and sold out the first week. Over the next couple of years, I brought more and more bread and kept selling out. Kirsten, my girlfriend at the time and my wife now, was helping me out and we started a Kickstarter campaign. It was successful and we raised $30,000, which was a great testimony to the fact that people liked what we were doing and wanted to support us. We opened Knead in November 2017 at 3467 Hampton Ave.

Home Videos The WORLD of WINE – Wine News. Cheap wine, tasting notes and cooking with wine The World of Wine – May 2021 … END_OF_DOCUMENT_TOKEN_TO_BE_REPLACED

How to visit Napa Valley on a Budget. In this video Carson and I explain a few ways to enjoy Napa on the cheap. Tip and advice about how to visit Napa … END_OF_DOCUMENT_TOKEN_TO_BE_REPLACED

Home Videos Get To Know Argentina Wine | Wine Folly If you love Malbec, Argentina is your ultimate wine region. But that’s not … END_OF_DOCUMENT_TOKEN_TO_BE_REPLACED