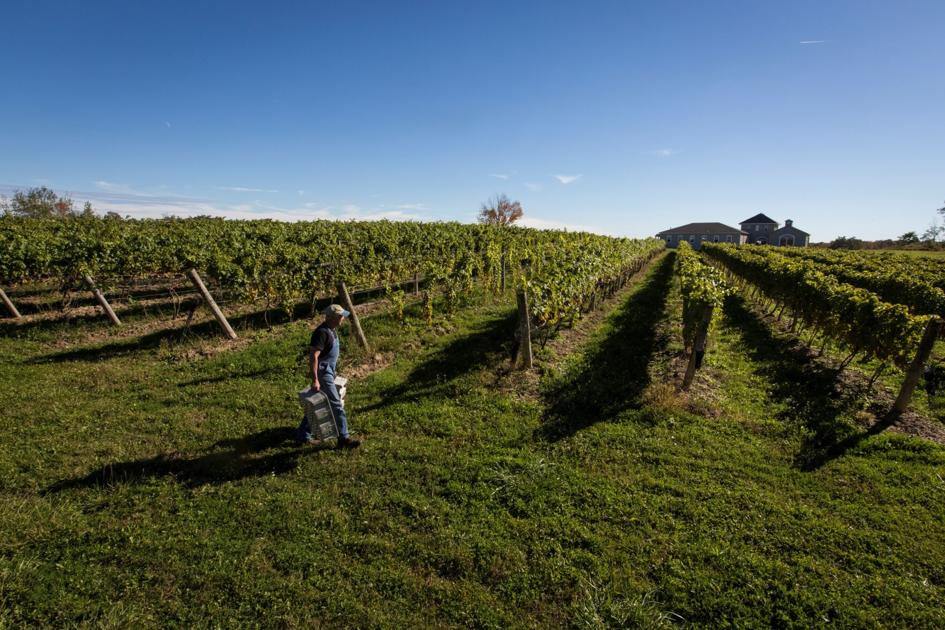 The St. Joseph Vineyard wines made by Art and Doreen Pietrzyk almost have evolved into collectables since word of the winery’s recent sale has gotten out.

The couple, who pioneered the making of both pinot noirs and ice wines in the Grand River Valley, included a sizable inventory of those wines and others when they sold the 60-acre winery off Route 307 in Harpersfield Township to Dominic and Shelly Piunno of Highland Heights. The sale closed on Feb. 18.

The Piunnos are renaming the winery Baci, which means kisses in Italian. Those who wish to order the remaining St. Joseph Wines may call 440-571-5969.

A new website, baciwinery.com, soon will be in place with a list of wines that may be ordered. Orders may be picked up at the winery or delivery can be arranged.

“We’ve already got a lot of ideas about what we’re going to do,” said Piunno, 47, president of Willoughby-based MCR Printing and Packaging. “I’ve been making wine at home for 25 years.”

He and his partner, Carmen Cefaratti, already have met with an architect who is incorporating some of those ideas into plans for remodeling and updating the winery, which will include a new kitchen

He envisions a wood-fired pizza oven for a signature dish, but the main focus will continue to be on the wines.

“My wife, Shelly, and I have been coming out here for many years, and the credit for finding out St. Joseph might be for sale goes to her,” he said. “This property is fantastic. And it’s not only a beautiful vineyard but has a strong winemaking tradition.”

“The time was right,” said Doreen Pietrzyk, noting the sale took only a few weeks from the time they were approached by Piunno.

The new owners have kept Seth Warden as vineyard manager/winemaker.

“As an engineer, I made it a habit to document everything,” said Art Pietrzyk, who began making wine as a hobby before he retired from Rockwell International. “Seth, who has a degree in horticulture and has management skills, was trained with all my documentation so he’d be able to step in and take over the winery if I needed to walk away.”

The past several years Pietrzyk, 73, has had health issues, including several surgeries and an aneurysm.

“Seth has worked at every step from pruning, canopy management and the wine cellar, so he’ll be making very nice wine,” Pietrzyk said. “It didn’t happen the way we’d planned, but he’ll be taking over where I left off.

“Maybe he’ll make even better wines than what we’d made before.”

The timetable for reopening as Baci Vineyards depends on the remodeling and what the new owners end up doing.

“It will either be this fall or next spring,” said Piunno.

“First and foremost, we’ll be making wine,” said Cefaratti. “The concept is to have light Italian meat and pasta dishes, such as those of Tuscany and Umbria. We’ll go wherever the wine takes us.”

The men may be adding vines to the part of the land that now is being farmed in soybeans and corn, and they may streamline the grape varieties now growing there.

“We’ll definitely keep the Saperavi,” said Cefaratti. “I recently tasted it for the first time and was really impressed.”

Pietrzyk became known in the region for trying out unusual and little-known grape varieties to learn about the wines they made.

Only a few rows of Saperavi grapes — a variety believed to be nearly 8,000 years old — are grown in the vineyard. They come from the former Soviet republic of Georgia, where the wine is made in underground casks. See the 2017 News-Herald story at bit.ly/stjoseph-saperavi.

Home Videos The WORLD of WINE – Wine News. Cheap wine, tasting notes and cooking with wine The World of Wine – May 2021 … END_OF_DOCUMENT_TOKEN_TO_BE_REPLACED

How to visit Napa Valley on a Budget. In this video Carson and I explain a few ways to enjoy Napa on the cheap. Tip and advice about how to visit Napa … END_OF_DOCUMENT_TOKEN_TO_BE_REPLACED

Home Videos Get To Know Argentina Wine | Wine Folly If you love Malbec, Argentina is your ultimate wine region. But that’s not … END_OF_DOCUMENT_TOKEN_TO_BE_REPLACED