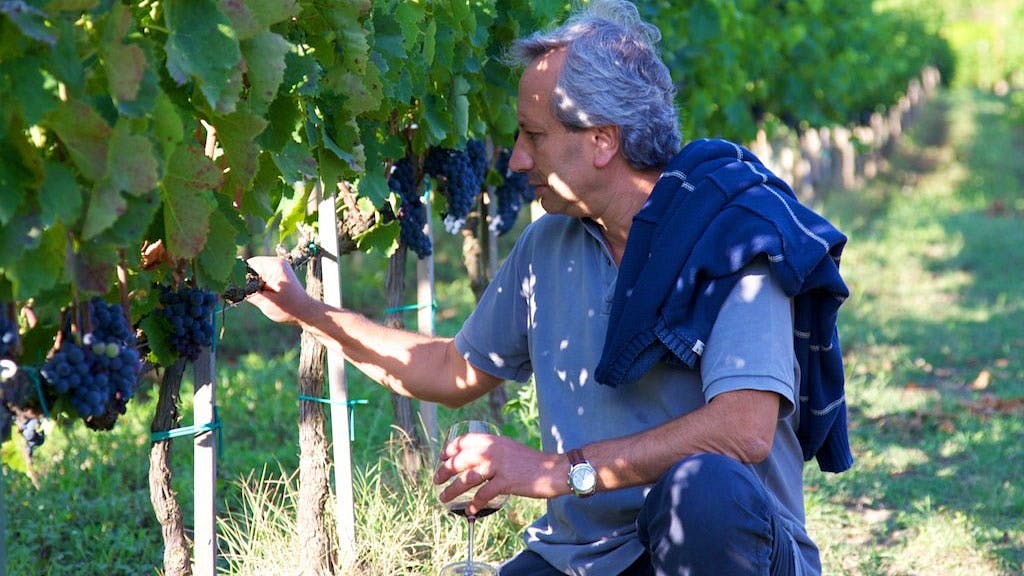 In the middle of the ankle of the Italian boot, Luigi Moio’s Quintodecimo estate stands out.

Here in the laid-back, agricultural interior of Campania, his meticulously trimmed vineyards stand in sentry-like rows against the geometric contours of a small valley. Spreading over the top of a hill is a gracefully proportioned farmhouse with a winery and underground cellars worthy of, say, a Tuscan nobleman.

This is where Moio, 60, a Naples-based enology professor and southern Italy’s most erudite winemaker, has worked his craft for the past 16 years, producing silky-smooth, single-variety Aglianico reds. Quintodecimo’s two single-vineyard riservas from the Taurasi DOCG, along with an Aglianico from the larger Irpinia DOC, have consistently scored 90 points or higher in Wine Spectator blind tastings.

“Otherwise,” he says, looking over his vineyards from a winery terrace, “you are just drinking alcohol.”

Aglianico, not known for its perfection or nuance, typically makes high-octane wines of tannic power and rusticity. But a new generation of winemakers has helped change that image over the past 20 years. Moio and Quintodecimo have been important players in that change.

A conversation with Moio is like a glass of one of his wines. Those wines combine the local, southern spice and his interpretation of his terroirs with an overall feeling of bone-dryness and balance that makes me think “French.”

Moio studied primarily in Burgundy, where he earned a Ph.D. for his work on the chemistry of aromas and flavors in wine and food. His bestselling 2016 Italian wine book, Il Respiro del Vino (The Breath of Wine), was published in French translation earlier this year. When he talks, he can sound like an introspective and philosophical Frenchman.

“If I didn’t create Quintodecimo, I would have had an existential crisis,” he sighs. “I probably would have been a professor in, maybe, California.”

Moio is a fourth-generation winemaker who was born in Mondragone, on the coast north of Naples. There, his father, Michele, helped lead the renaissance of the ancient Roman appellation of Falerno, which today produces reds primarily from Aglianico and Primitivo and whites dominated by Falanghina.

“My father’s dream was to have a son who was an enologist,” says Moio, who went far beyond that. Moio became fascinated by scientific research, which led to his doctorate at the University of Burgundy in Dijon.

Moio returned to Campania in 1994 at the urging of Taurasi’s Antonio Caggiano. “Italy was having a big wine renaissance,” he says. “But there was almost nothing in Campania, and there were people who wanted me to help.”

Moio taught enology at the University of Naples while consulting for a growing list of wineries, including the Amalfi Coast’s Marisa Cuomo and Irpinia’s modernist Feudi di San Gregorio.

“In the first years, I became a winemaker by night after teaching during the day,” says Moio, who still teaches at the university and maintains a small roster of clients. “All my friends said, ‘Luigi, you must have your own winery.’”

In 2001, he and his second wife, Laura, a fellow enologist and Ph.D., launched Quintodecimo, based on an ancient name for the town of Mirabella Eclano. “I wanted to create something in Irpinia,” Moio says. “In my head, it was on the French model—a property where we could live in the middle of the vines.”

The different soils and sun exposures on the Quintodecimo estate result in Aglianicos of differing character, bottled separately. (Robert Camuto)

The couple began with a farmhouse and about 10 acres of grain fields 1,500 feet above sea level. They planted Aglianico, producing their first vintage in 2004. In the years that followed, they tripled the size of the estate by buying land from 15 neighbors for more vineyards.

Yet for all his admiration of French viniculture, Moio chose to make truly local wines. “How can Cabernet and Merlot from Italy compete with Bordeaux top growths? How can our Pinot Noir compete with Burgundy?” he says. “I make Aglianico—not a copy of a French wine.”

Moio studied his different terroirs, planting the white variety Falanghina at some lower elevations and saving the higher part of the slopes for Aglianico. Then he delineated his estate Aglianico vineyard into two parcels for his top-end Taurasi riservas: Vigna Quintodecimo, with northern and western exposures and clay-limestone soils, and Vigna Grande Cerzito, a south-facing slope with high levels of volcanic sand.

Today Quintodecimo, which produces less than 8,000 cases a year, has more than 50 additional acres for white wines in the nearby appellations of Greco di Tufo and Fiano di Avellino. The vineyards, overseen by one of his former students, Simone Ianella, are organically certified. Moio’s two daughters have also joined the winery: Chiara, 26, as an enologist, and Rosa, 29, in marketing.

At harvesttime, Moio is one of the first area producers to pick his crop, starting in late September, a full month before his longtime client Caggiano. “You want the freshness and the fruit,” he says.

In his winery, Moio’s Aglianicos ferment on ambient yeasts. To avoid extracting harsh tannins, he relies on gentler pump-overs of the fermenting grape must and controls fermentation temperatures after alcohol levels rise.

Luigi Moio’s barrel cellar is right under his home, for easy access to oversee the wines. (Robert Camuto)

Defying the trend to move away from barriques to larger fermentation vessels, Moio ages his Taurasi riservas for 18 to 24 months entirely in new small oak barrels. “The barrique is the best ratio of wood and wine to stabilize wine,” he says. “It is a tool to stabilize wine, not to add aromas.”

Of critics who dismiss barriques, he says unequivocally, “They are ignorant. It’s a fashion. Like amphora.”

At the bottom of a valley below his winery, he has recently planted a spiral-shaped vineyard—a “laboratory” with different types of clones planted to different sun exposures, rootstocks and training systems and receiving different kinds of organic treatments.

For all the thought and careful planning that goes into his work, Moio considers himself a non-interventionist—using minimal treatments in the vineyards and minimal technology in the winery.

“To not intervene,” he says with a meaningful look, “you need to study.”

Home Videos The WORLD of WINE – Wine News. Cheap wine, tasting notes and cooking with wine The World of Wine – May 2021 … END_OF_DOCUMENT_TOKEN_TO_BE_REPLACED

How to visit Napa Valley on a Budget. In this video Carson and I explain a few ways to enjoy Napa on the cheap. Tip and advice about how to visit Napa … END_OF_DOCUMENT_TOKEN_TO_BE_REPLACED

Home Videos Get To Know Argentina Wine | Wine Folly If you love Malbec, Argentina is your ultimate wine region. But that’s not … END_OF_DOCUMENT_TOKEN_TO_BE_REPLACED