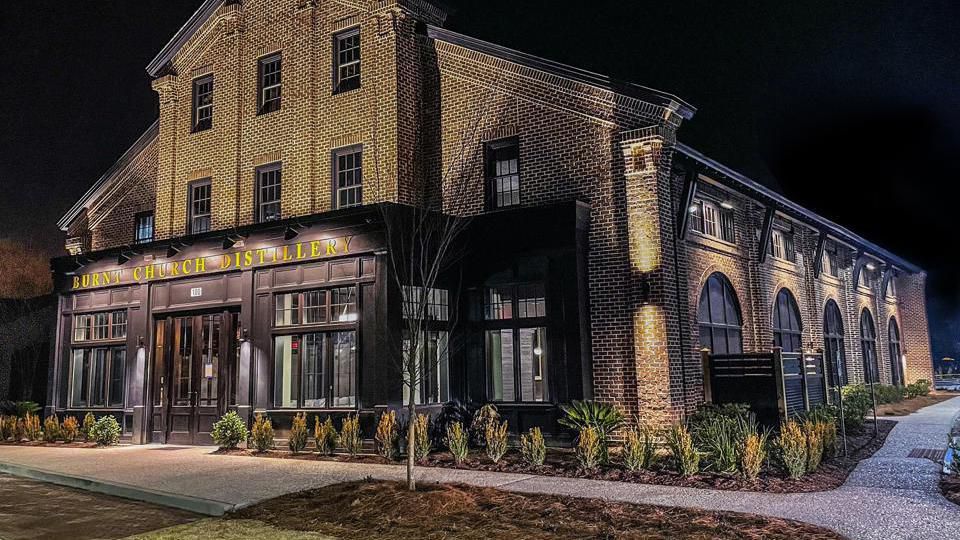 At first glance, the recently opened Burnt Church Distillery seems out of place. Its impressive red brick facade towers over you as you approach it, a feeling only amplified upon entering it. A cathedral-like roof hovers three stories overhead, drawing your eyes towards a 7,000 square foot tasting room overlooked by a large stained-glass window. It’s the type of facility you would expect to find in the nearby metropolises of Savannah or Charleston, not in tiny Bluffton, South Carolina. But, recent changes to decades-old liquor laws in the state could mean that more facilities like this will start appearing throughout the state.

According to the latest data from the American Craft Spirits Association, the United States craft distilling industry has seen strong growth trends over the last decade. From 2014-2019 the industry experienced a 142% growth rate going from 906 distilleries to 2,197. Those numbers mirror the 111% growth rate the craft brewing industry saw in the same timeframe, according to the Brewers Association.

In South Carolina, like many other states, a complex series of laws left over from the repeal of Prohibition existed. Each state crafted its own set of laws to reintroduce legal alcohol into its borders. Some of the more restrictive were fashioned inside the Palmetto State.

All facets of the liquor industry had to deal with restricted sales on-premise, limited tastings, and early closing times of 7 pm. It severely limited the growth of local distillers, vintners, and brewers.

Two laws passed in 2014 and 19 changed the playing field for breweries. They were able to sell pints on-premise, sell products to go, greatly expanded hours, increase tastings, and allowed them to serve food and other kinds of alcohol. In response, the number of breweries went from 31 to 95 over five years, a 206% increase. Seeing that success, the state’s distillers organized and formed the South Carolina Distillers Guild (SCDG) in 2017 to lobby for the same changes the brewers received. They approached Republican Senator Sean Bennett, the person who helped usher the two brewery bills through the legislature, for help.

“I am a fan of entrepreneurism and small business. I hate to see government obstacles that impede growth. When the distillers approached me, I agreed that we needed to level the playing field for them the same way we did for the brewers. We had done all the heavy lifting a few years before while passing the beer bills; it was much easier to convince my colleagues about why it made sense to change these laws,” said Bennett. “We have seen a whole lot of success on the brewery side since we passed the bills, so I fully expect to see the same results on the distilling side.”

The distillers also received a boost to their cause when E&J Gallo Winery, the largest winery in the world, announced in early March that they were looking to build a large bottling and storage facility in the state. It would act as their East Coast home bringing in $400 million in investments and employment of 500 people. Gov. Henry McMaster and the state’s top elected officials announced that they were behind the project. A bill was introduced to the legislature to amend the liquor laws to allow an onsite wine tasting room and other changes.

With the spotlight on that bill, the distillers introduced their bill and ended up attaching it as an amendment to the Gallo bill to shepherd it through the legislature. It passed with bipartisan support on May 4, and became law on May 17 when Gov Henry McMaster signed it into law. The changes it makes are as follows.

·     Allow distilleries to serve food and other kinds of alcohol

·     Expand hours of service from 11-7pm to 9-11pm while also adding Sundays. Retail bottle sales will be allowed Monday to Saturday from 9-7

·     Increase the amount of hard liquor that can be sold for off-site consumption from 2.25 liters or 3 bottles to 4.5 liters or 6 bottles.

It could make an immediate impact on the state. The 29 micro-distilleries in the state have invested $67.4 million into the state and local economies so far ($60 million into production facilities, $6.2 million in jobs, and $1.2 million in agricultural purchases), according to the SCDG, with many of them planning expansions now that the laws have changed.

“Our members have ambitious plans in the works that have been hinging on this bill passing,” says Scott Blackwell, president of the SCDG and the co-founder of High Wire Distilling Company in Charleston. “They are projecting a 200% increase in jobs, $35 million in facility investments, and another $3.4 million in agriculture purchases over the next four years. That doesn’t even bring into account planned new distilleries and increases in the tourism business.”

For Tony Chase the founder and master distiller of Daufuskie Island Rum Company the changes in the law means an immediate expansion of his nine-year-old distillery. Located on tiny Daufuskie Island the distillery relies on tourists to drive his business, the island is only accessible by boat, and the old laws hampered the ability of his business to grow. “The passage of this law means that I will see a significant increase in revenue by doubling my bottle sales and the expanded hours means that I can offer a venue for tourists to visit in the evening on the island, the selection is limited,” he says. The distillery is moving forward on plans for a $700,000 expansion that will expand storage facilities, double their square footage, and add a restaurant onsite. They also will be increasing their workforce from four employees to ten. Chase is forecasting sales to grow from 40,000 bottles a year to 65,000.

While Burnt Church Distilling is an outlier for now, its $13 million-dollar price tag and almost 24,000 square footprint are impressive for any new business; it could be a pioneer for future distillers in the state. According to co-founder Billy Watterson, plans are to ramp up production of its bourbons, vodkas, and gins over the next few years. Plans call for expanding distribution throughout the country. Part of the revenue to fund the venture will come from having a full tasting room and a steady stream of tourists searching them out. Others in the state will be executing their own expansion plans now that the laws have changed. The odds are good that there will be a significant number of micro-distillers spread throughout the state in a few years (more than the thirty nowadays) , and the impressive facility in the Carolina Low Country will not seem so otherworldly.

Home Videos The WORLD of WINE – Wine News. Cheap wine, tasting notes and cooking with wine The World of Wine – May 2021 … END_OF_DOCUMENT_TOKEN_TO_BE_REPLACED

How to visit Napa Valley on a Budget. In this video Carson and I explain a few ways to enjoy Napa on the cheap. Tip and advice about how to visit Napa … END_OF_DOCUMENT_TOKEN_TO_BE_REPLACED

Home Videos Get To Know Argentina Wine | Wine Folly If you love Malbec, Argentina is your ultimate wine region. But that’s not … END_OF_DOCUMENT_TOKEN_TO_BE_REPLACED