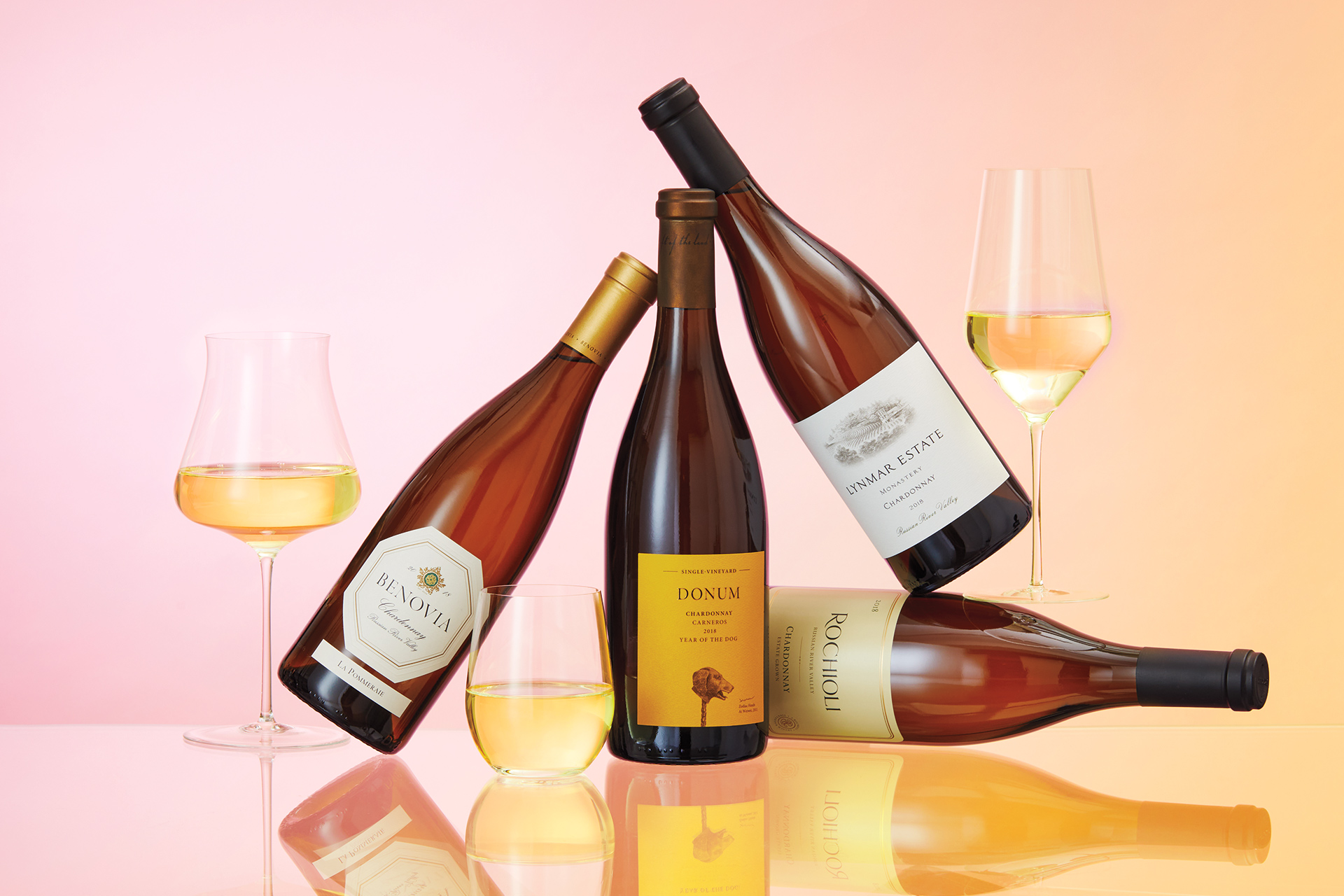 California Chardonnay is in a good place right now. It has burst forth from a long, controversial period where it was cocooned in a reputation of buttery vapor or worse.

During those dark days of derision, not everyone abandoned hope, however. Least of all those producers who are really good at working with the grape. Their tenacity is a gift.

Beauty cannot forever be denied, and now, California Chardonnay, specifically from Sonoma, is finally having its moment.

“The average consumer is starting to realize that California Chardonnay does not have to be buttery, oaky and sweet,” says Pete Soergel, winemaker at Lynmar Estate. “In Sonoma, we can produce Chardonnay with cleaner, brighter profiles, too. Collectively, our region is expanding the definition of what great Chardonnay can really taste like. I’m really excited by the evolution of Sonoma Chardonnay and its continued potential.”

Historian Charles Sullivan credits Wente Vineyards, then known as Wente Bros., in Livermore as California’s first producer of Chardonnay in 1936. Confusingly, it was labeled Pinot Chardonnay.

Twenty-four years earlier, the Wentes brought cuttings from France and developed what’s now called the Wente Clone. It’s estimated that 75% of California Chardonnay is derived from this clone.

In Sonoma County, Hanzell’s 1953 Ambassador’s Vineyard is thought to contain the oldest

New World Chardonnay vines. The original three acres are still on St. George rootstock, derived the Wente clone. When it was planted, there were fewer than 100 acres devoted to the variety statewide.

Hanzell Vineyards was the first to use imported French oak barrels exclusively to age its wines, rather than the large vessels often made from redwood that were the norm at the time. This had a profound influence on the grape’s future trajectory. French oak is now used prominently by most California producers.

Still, nothing catapulted modern-day California Chardonnay quite like Napa Valley-based Chateau Montelena when its bottle was named the top white wine at the 1976 “Judgment of Paris.” That 40% of its grapes were actually sourced from Russian River Valley winegrowers Helen and Charles Bacigalupi gave Sonoma new hope.

Fast forward to 1989. In the woods above Occidental, on a cool-climate 1,200-foot ridge, Warren Dutton planted the first vines of the B.A. Thieriot Vineyard. Those grapes would eventually go to Littorai and Williams-Selyem, among others.

Today, at more than 16,000 acres, Chardonnay is the most planted grape in Sonoma County. Monterey is the only county in the state with more acreage devoted to the variety.

That many of the best bottlings come out of Sonoma County is a meaningful coincidence of vision and labor. Winemakers push for better Chardonnay grapes from cooler climates to preserve some freshness and also have become more purposeful and intentional with oak.

“I’ve had numerous people tell me that they normally don’t like Chardonnay, but that the Lynmar Chards are the best they’ve had,” says Soergel. “This all starts with great site selection and finding the right clone and rootstock that will do best at that given location.”

A range of climates within the county can lead to numerous expressions of the same grape.

“With increased quality farming, vine balance, soil health and paying attention to the details, I feel the quality of Sonoma Chardonnay can be the best in the world,” says Soergel. “For me, the Wente clone is the gold standard. At the right site, it has great acidity, texture and nuance.”

Winemaking tools can help thoughtful creators bring out the best of a site. Fermentation in stainless steel, concrete and French oak can showcase the same sites and blocks in different ways.

Soergel, for example, uses barrels that expand the texture and plushness in one wine, and ones that frame acidity and brightness in another. It allows him to make unique Chardonnays from the same vineyard.

The 2018 and 2019 vintages show this range and perspective from many producers.

A sense of place

“We know site selection is always the root of quality with any variety,” says Winemaker Kirk Venge, who makes Chardonnays for different projects, like B Cellars. “Chardonnay, of course, enjoys a cool climate, interesting topography and limited soils to really express the variety.”

He says that the Sonoma Coast, Petaluma Gap and Russian River Valley possess the best, most beautiful terroir for the grape. “Terroir, we know, is made up of the climate, plant and soils, and the interaction between the three,” he says. “But there is an important fourth to terroir, and that is the farmer and their knowledge of growing the grape. It’s not something you are born with.”

“I can say from my experience that picking earlier and using less new oak has made a tremendous difference in the wine,” she says.

Hirsch says by picking earlier, she still gets texture and depth of flavor, but with greater precision, detail, balance and, of course, acidity.

“I have no way of knowing for sure, but I think the texture and depth come from the site, plus vine age,” says Hirsch. “We have two Chardonnay parcels, planted in 1994 and 2002. It seems to be increasing over time.”

She doesn’t know if she could achieve that depth and texture on a different site. At Hirsch, 1,500 feet above the Pacific Ocean along the San Andreas Fault, she achieves her ripeness profile from highly variegated soils, and what she describes as “an erratic, unpredictable climate.”

That site specificity isn’t something everybody has, which is why Hirsch thinks there has been a tendency in California to pick Chardonnay later and use a lot of oak and bâttonage to impart a similar weight.

Bâttonage is a French term for stirring sediment, known as lees, back into the wine to extract texture and complexity.

“A vineyard planted in a warm site in deep soils could be picked early to achieve a more ‘balanced style,’ but I don’t think it will have depth and intensity,” says Hirsch. “For me, the magical sites can produce wines that are both elegant and intense naturally.”

Producers have long honed in on these kinds of sites. From David Ramey to James Hall, of Patz & Hall, winemakers have helped make the variety great in Sonoma County over the last several decades. It’s forged a path to be further refined by others.

“What my generation of winemaker, and those after me, are enjoying is what was laid out 20 or 30 years before us, and continues with passion for perfection today,” says Venge. “The use of oak, malo[lactic fermentation], yeast strain,crop load and clone to site has been mixed and matched a thousand times by very smart people, and we are at a great place to take all of that and create a better beginning more than ever.”

Sonoma Chardonnay to look for

Benovia 2018 La Pommeraie Chardonnay (Russian RiverValley); $52, 96 Points. From Zio Tony Vineyard, this beautifully exquisite white is cohesive and complex, a vibrant harmonization of golden apple, stone fruit and lemon rind. Refined tannin and oak temper the power and opulence, celebrated by a note of crème brûlée. The finish is marked by a texture and taste of wet stone and nutmeg.

Donum 2018 Year of the Dog Single Vineyard Chardonnay (Carneros); $65, 96 points. This lovely white is light on its feet, despite its inherent power and concentration. Tangerine, grapefruit and peach flavors come to the fore with ease, integrated within a cradling of toasted oak and intriguing notes of nutmeg, clove and earth.

Lynmar Estate 2018 Monastery Chardonnay (Russian River Valley); $55, 96 points. This is a perennially cohesive, elegant and bright wine, juicy in pear and apple with a lightness of oak. Savory seasonings of nutmeg, salt and stone give way to crushed rock, making for a complex, layered and deliciously lengthy wine that stays long on the mind and palate.  Editors’ Choice.

Rochioli 2018 Estate Grown Chardonnay (Russian River Valley); $58 points, 96 points. This wine offers incredible aromatics of crème brûlée and brioche, rich, warming characteristics that lead to more mineral-driven elements of oyster shell and stone. From several parts of the producer’s estate, including Little Hill and River Block, this is a juicy, lengthy and beautifully structured wine, finishing in a swirl of grilled pineapple.

Red Car 2018 Zephyr Farms Vineyard Chardonnay (Sonoma Coast); $58, 95 points. A hearty mouthfeel belies this wine’s quintessential and quenching acidity, driven by its cool-climate provenance and winemaking style. Green-apple, pear and tangerine flavors meld together easily along a midpalate of complex structure and length, with a lift of crispness reappearing on the finish.

Three Sticks 2018 Origin Chardonnay (Sonoma Coast); $55, 95 points. Tones of crushed salt, oak, lemon zest and crème brûlée blend in this beautifully made wine. From the producer’s own Durell Vineyard, this white is fermented in concrete egg, amphora and stainless steel, aged on its lees to maximize creaminess and texture. The power is there, yet it is elegant and balanced.

Williams Selyem 2018 Drake Estate Vineyard Chardonnay (Russian River Valley); $65, 95 points. This highly inviting, lifted white wine is exuberant in tones of Meyer lemon, jasmine and Gravenstein apple. It is elegantly layered and complex in structure on the ample, medium-bodied palate, dazzling in flavors of crushed rock and sea spray on the finish.

Anaba 2018 Chardonnay (Sonoma Coast); $40, 94 points. Bright and enduringly elegant, this white sources grapes from several Dutton-farmed sites in addition to the Scribe property in Sonoma. Citrus and pear flavors are wrapped in baking spice and brioche, never losing sight of its lively, fresh foundation of acidity.

B Cellars 2018 Calesa Vineyard Chardonnay (Sonoma Coast); $55, 94 points. This wine is richly layered and thick on the palate in tropical fruit and butterscotch, finding balance on the midpalate with bright acidity and a bit of grip. Flavors of vanilla and peach play on the lengthy, baking spice-laden finish.

Dutton-Goldfield 2018 Rued Vineyard Chardonnay (Green Valley); $55, 94 points. From a clone once called the Chardonnay Musqué selection, this wine is highly aromatic and fresh. Juicy tropical fruit and tangerine flavors remain crisp and brilliant, leading to a complex midpalate of Meyer lemon and pear. The finish is topped by lasting, lingering layers of hazelnut.

Hirsch Vineyards 2018 Chardonnay (Sonoma Coast); $60, 94 points. This perennially well regarded producer is known rightly for Pinot Noir, but farms a small four acres of Chardonnay on its Fort Ross-Seaview site as well. Reductive, nutty and flinty, it has prominent acidity and is textured and fleshy in grapefruit, lime and apricot, finishing as crisp as it starts.

La Follette 2018 Lorenzo Vineyard Chardonnay (Russian River Valley); $50, 93 points. A soft, rounded white nicely layered in tropical and stone-fruit flavors, this is from a site planted in 1974 in the heart of the appellation. Bright and fleshy, it lingers in floral perfume and a touch of baking spice.

LaRue 2018 H. Klopp Vineyard Chardonnay (Sonoma Coast); $60, 93 points. This lovely white starts with a touch of reduction, opening slowly in the glass to reveal crisp, bright acidity and elegant flavors of green apple and Meyer lemon. As it develops further, the brightness continues, complemented by a subtle richness of Tahitian vanilla and toasted oak.

Home Videos The WORLD of WINE – Wine News. Cheap wine, tasting notes and cooking with wine The World of Wine – May 2021 … END_OF_DOCUMENT_TOKEN_TO_BE_REPLACED

How to visit Napa Valley on a Budget. In this video Carson and I explain a few ways to enjoy Napa on the cheap. Tip and advice about how to visit Napa … END_OF_DOCUMENT_TOKEN_TO_BE_REPLACED

Home Videos Get To Know Argentina Wine | Wine Folly If you love Malbec, Argentina is your ultimate wine region. But that’s not … END_OF_DOCUMENT_TOKEN_TO_BE_REPLACED