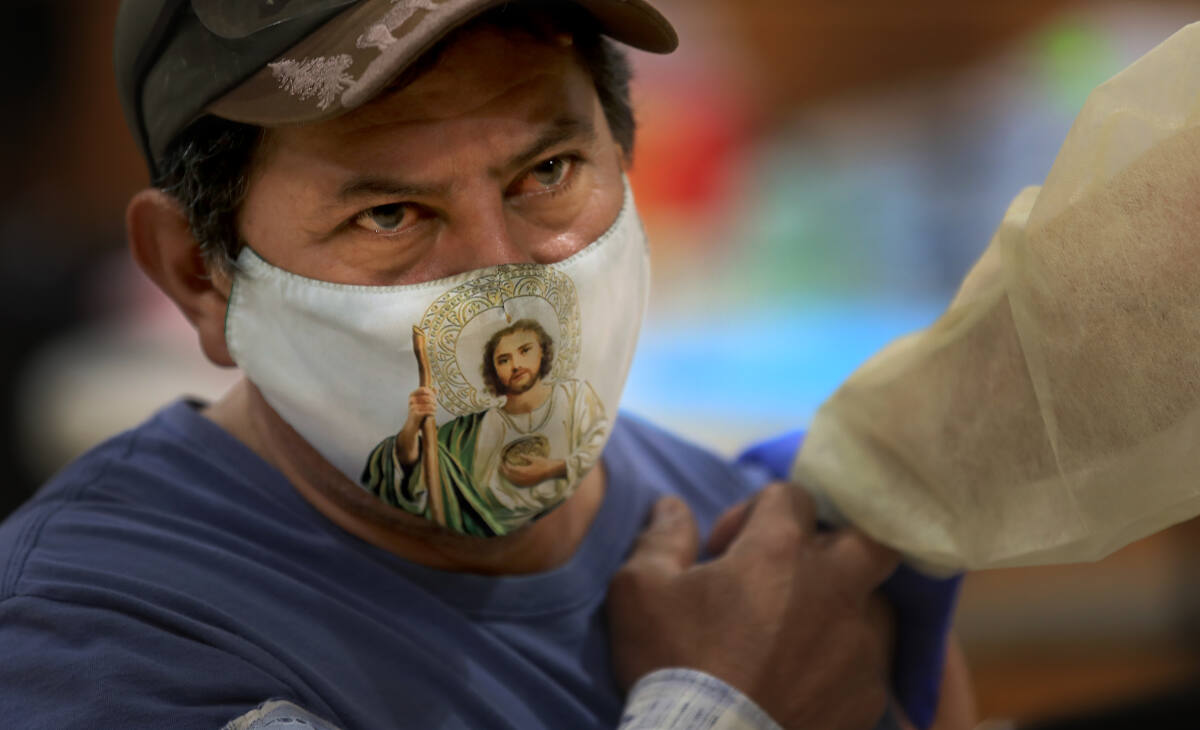 Hugo Tinoco, 41, has worked in Sonoma County vineyards for the better part of 18 years, harvesting grapes, driving a tractor, pruning and weeding.

After the coronavirus pandemic penetrated the county’s borders last spring, Tinoco said he continued working, even as his wife and two daughters took shelter in their Sonoma home. For Tinoco, that was not an option because his job requires him to toil with his hands, tending to the area’s prized wine grapes.

Tinoco realizes he could bring the highly contagious virus home from work with him. Not wanting to add to his risks, he has avoided gathering with friends and extended family. Now that the county has inoculated health care workers and many of its oldest residents, he wants the chance as an essential worker to join them and receive his two shots against COVID-19.

“I’m the one (in my family) who gets out to go to work, the one who goes to the store for food and other things,” Tinoco said. “Once I get the vaccine, I’ll be less at risk and not putting my family in danger.”

Tinoco is among thousands of farmworkers and tens of thousands of “essential workers” in the county waiting to be vaccinated. Like him, many of them are Latino residents.

How soon they get their first injections depends on the success of county and state officials to dramatically alter the defining unfair characteristic of the ongoing pandemic: racial, ethnic and economic inequality. Latinos have taken the brunt of widespread local virus infections, and some fear they could also be struggling near the back of the long line for inoculations.

The county’s vaccination campaign, hampered by a severe lack of vaccine and the bungled beginning of public inoculation sites, is still in its infancy. Last week, local public health officials received 7,425 more doses, excluding the supplies at the three large area hospitals.

Most of the vaccine doses, which started arriving here in December, thus far have been injected into the arms of health care workers, first responders, residents of senior care homes and people aged 75 or older. Officials say these factors are likely skewing the demographics of early vaccinations.

There has been plenty of community outcry about the clear ethnic gaps in the pandemic, and county officials have pledged to do better with its vaccination programs. The county’s first disclosure of demographic data for those vaccinated gives an early look at who has received the vaccine thus far.

By contrast, white residents, who account for about 64% of the population, comprise 52% of locals who have gotten the first COVID-19 shot and 59% of those that have received both shots of the two-shot regimen for either Pfizer-BioNTech or Moderna vaccines.

Nonetheless, county officials said it’s too early to draw any conclusions about the vaccination inequity between ethnic and racial groups.

Dr. Urmila Shende, the county vaccine chief, said at this point the data is heavily tilted by inoculated health care workers, who are among the first groups locally and statewide to get immunized against the infectious disease that has gripped the nation.

“I think as we move further … we’re going to see those numbers even out quite a bit, and that’s something that we’ll be monitoring,” Shende said, during a press briefing Friday announcing the county next week would expand public vaccination sites and start inoculating residents aged 70 to 74 at three clinics plus at 11 local Safeway supermarket pharmacies on a limited basis.

As the county opens its vaccination supply to more people in the general population, public health officials, health care advocates and providers are accelerating efforts to try to ensure a more equitable distribution of vaccine doses. They say it’s an opportunity to beat down a virus that has taken the lives of 275 residents and already has taken advantage of decades of deep-seated socioeconomic inequality in the county.

Since March, the coronavirus has disproportionately infected the county’s Latino residents, who have comprised 65% of 26,600 confirmed COVID-19 cases. That share was as high as 75% at one point.

During a recent county forum on vaccine equity, Lynda Hopkins, chair of the county Board of Supervisors, said food and agriculture workers have a higher risk of contracting the virus because they are forced to work every day “to make sure that food makes it to the grocery stores, to make sure that food is growing in the fields.”

Home Videos The WORLD of WINE – Wine News. Cheap wine, tasting notes and cooking with wine The World of Wine – May 2021 … END_OF_DOCUMENT_TOKEN_TO_BE_REPLACED

How to visit Napa Valley on a Budget. In this video Carson and I explain a few ways to enjoy Napa on the cheap. Tip and advice about how to visit Napa … END_OF_DOCUMENT_TOKEN_TO_BE_REPLACED

Home Videos Get To Know Argentina Wine | Wine Folly If you love Malbec, Argentina is your ultimate wine region. But that’s not … END_OF_DOCUMENT_TOKEN_TO_BE_REPLACED