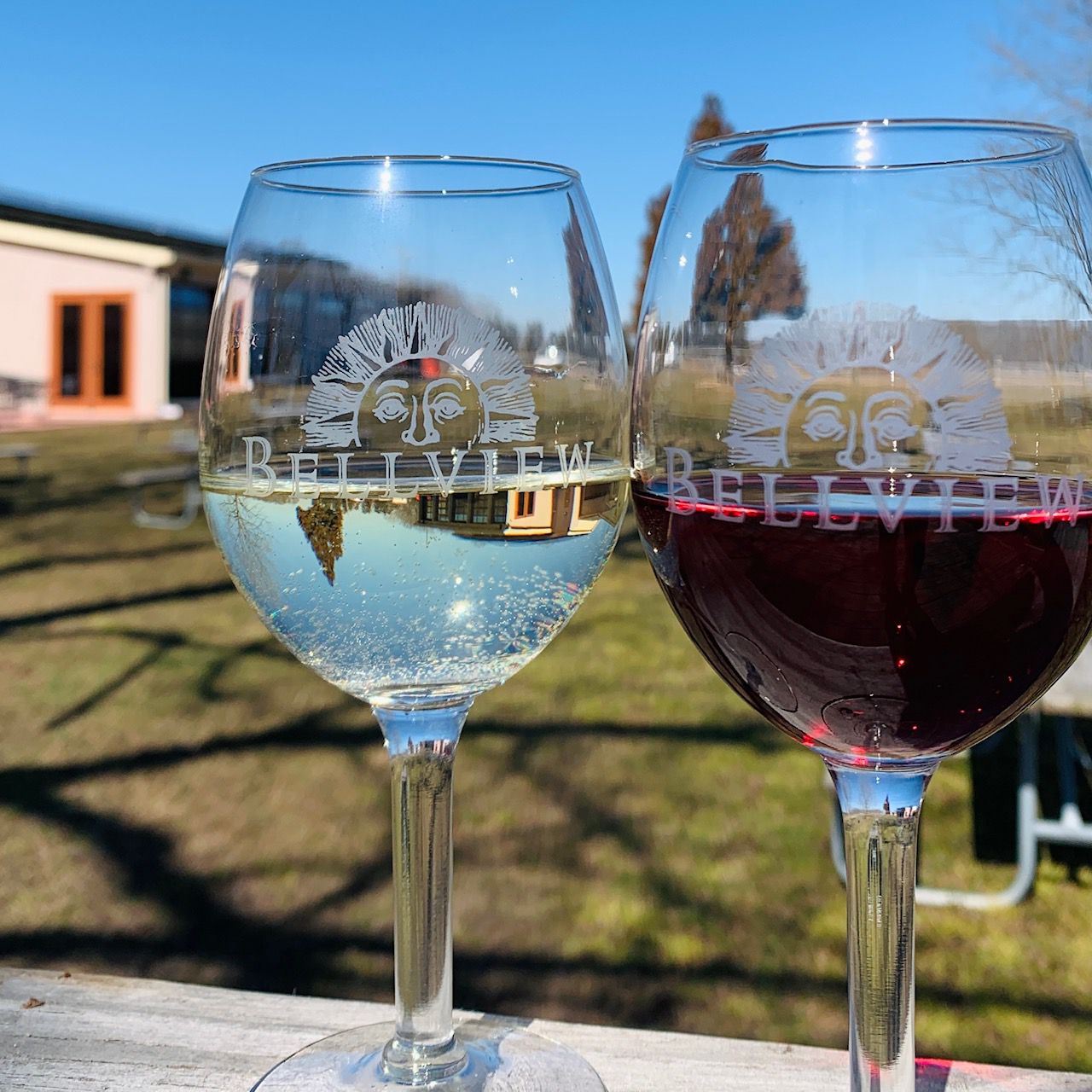 The Bellview story starts with Angelo and Maria Quarella who emigrated from Italy and purchased a small farm in Landisville, New Jersey, in 1914, according to the comprehensive history section on the winery website. They planted strawberries and watermelons between the stumps of trees that they cleared from the land and their 20-acre homestead produced sweet potatoes, onions, peppers, cucumbers, garlic, lettuce and almost any other vegetable that the family could make a living from.

Decades later, Bellview shifted to direct retailing as customers visited to pick their own strawberries and purchase their Christmas trees. A new barn was built to store hay bales that were produced for horse feed. In the 1990s the farm expanded to its present size of 150 acres, adding another new barn and a loading dock.

It began with the planting of 3 acres of grapevines and the conversion of an old barn on the original 20-acre homestead into a tasting room and winery. The renovated building that is today’s winery houses Angelo’s original wine cellar where, for decades, Quarellas have made their wines, according to the website.

Bellview sources 50 acres of grapevines made up of 21 varieties of wine grapes and produces over 8,000 cases of wine per year. Jim’s youngest son, Scott Quarella, is the fifth generation of the Quarella family to tend to the estate.

Located in the Landisville section of Buena in Atlantic County, New Jersey, it’s around 40 miles by road northwest of Atlantic City and 42 miles by road southeast of Philadelphia.

It produces more than a dozen estate-grown varietals as well as a selection of white, red, fruit, and specialty wines including a Port and an ice style wine. It’s also one of the few in the region to produce a dandelion wine.

Even with New Jersey’s current rule of 50 percent indoor occupancy because of COVID-19, there is room inside and plenty of space outside. Bellview in the past has staged a number of events, including its Seafood Festival, Harvest Party, and Italian Festival. It also welcomes private events.

In addition to the occupancy rules, the guidelines in New Jersey still prohibit tastings and sittings at the bar.

Below is the latest in the “6 Questions” series of interviews with winemakers and owners of East Coast wineries, which looks behind at what has been a turbulent year and, with optimism, looks ahead. Thanks to Jim Quarella for taking these on.

Q, How did the vineyard handle the winter I assume it was more snow than damaging cold? How many acres are you farming and when did you start? Has it evolved much through the years in terms of trying some newer varieties?

A, Our vineyard handled the winter well. We ended up with plenty of snow this year, but there were no events of extreme temperature fluctuation that could harm the vines. They remained dormant the entire winter and now buds are beginning to swell. Some of our natives already have 1- to 2-inch-long shoots and are going strong. Fingers crossed for an uneventful spring without frost.

We planted our first 3 acres of grapes in the year 2000. That planting consisted of one acre each of Chardonnay, Cabernet Sauvignon and Chambourcin. Throughout the years we added acreage, and currently we’re up to 50 acres of vineyards with over 20 different varieties of wine grapes. At first, we were planting a lot of vinifera as that was what was in demand from the consumer, but as time went on we’ve been planting more and more hybrids [or new varieties as I like to call them], and even pulling out plantings of vinifera for their lack of consistency between vintages. We have tried many new varieties through the years; some have worked well for us and some we pulled the plug on after several years. Those that we’ve come to really like for their consistency, sustainability and quality are Blaufrankisch, Gruner Veltliner, Viognier, Chambourcin, Merlot, Cabernet Franc, Vidal Blanc, Traminette and Regent.

Most recently we’ve been playing with a grape variety brought into the U.S. by the Outer Coastal Plain Vineyard Association through Foundation Plant Service quarantine from Italy, named San Marco. The first few plants we put in the ground showed encouraging results, so in 2018 we planted a row of 50 vines from which we have been able to get a small harvest of grapes, as well as some bud wood that we sent to Double A vineyards for propagation. We’ll be planting a full acre of San Marco next week. You can find more information on San Marco at the website of the Outer Coastal Vineyard Association (of which I am the president) at https://outercoastalplain.com/new-varietals. Two other new varieties that we’ll be planting next week are Saperavi, native to Georgia, and Tannat, which originated in Basque. Both have good cold hardiness. We anticipate the Saperavi making an excellent varietal on its own, and the Tannat will primarily be used in blends.

Q, Two varieties I want you to tell me about in terms of maintaining them: the Blaufränkisch and Traminette. How do you like working with them? How are the yields? And are you finding new fans of both of them among your customers?

A, We are big fans of both of these varieties both in the vineyard and in the winery. That’s when we get really excited; when both the vineyard manager and the winemaker like a grape variety. It’s hard to find that balance! In the vineyard, the Traminette is very disease-resistant and has good cold hardiness, the only drawback is that the tonnage our plantings yield seems not to be very consistent from year to year. The Blaufränkisch is a consistent producer in terms of tonnage and has great cold hardiness for a vinifera. It ripens earlier than most reds, so we don’t have to worry as much about having a long season in order to get mature fruit like you do with Cabernet or Petit Verdot.

Q, Gotta ask about the wine you sell that sends a donation to animal rescue. How long have you been doing that and what led you to start the relationship? A very cool idea.

A, We began that toward the end of February this year. We’re all animal lovers here, and when we were contacted by One Love Animal Rescue about doing a fundraiser together we jumped on it. We put this together and have been happy to see customers participating.

Q, What an interesting trio: port, ice wine and dandelion wine. I don’t know of ANYONE who does all three. Did you start making them all around the same time or did each one sort of evolve on its own?

A, We enjoy making different styles of wine and experimenting with new ideas. It keeps our brains sharp, plus playing around with new things is always fun. Each of them evolved on their own as we tried new things.

I was interested in making a Port early on and planted Touriga National and Tinta Cao to use for it, but over time I saw those varieties weren’t performing well in our growing environment. We’ve since removed those varieties, and are now making our Port from Petit Verdot and Chambourcin, which I find to be great varieties for our region. In the past five years, we added another dimension to our Port, which was to have some of our wine distilled by a local distiller into brandy and then use that brandy in our Port. Generally, winemakers will use a neutral brandy they purchase from who knows where to fortify their Port. Now that the brandy we add to our Port also comes from our farm, we can truly say it is an estate-grown Port. Not to mention it tastes better!

Our Ice wine is made in the ice wine style from Vidal Blanc, but because we aren’t far enough to the north to have freezing conditions late in the fall/early winter, our Ice wine is made cryogenically. This gives us the same juice to start the fermentation that you would produce making ice wine in the traditional style.

The dandelion wine actually comes from an old recipe that our family has made here since 1914, when the original farm (where our winery is located) was purchased. It was an activity that our family and their friends would do together, much like making salami or tomato sauce. My Great Aunt Ada was in her early 90s when we started the winery, and she oversaw the first batch we made there. I had ideas for changes to make it easier for us to produce commercially, but she told me “You’re going to ruin it!”. I decided she was right, and we make it true to the family recipe to this day. We’ll be picking the dandelions for the 2021 vintage within the next two weeks.

More recently we’ve played around with Beaujolais, Orange Wine, and pét-nat. Just last summer we released our first pét-nat to customers, who have been loving it. We’re planning on trying a Piquette this upcoming harvest. If it’s tasty we may scale it up for sale to customers.

Q, Your Coeur d.Est does the makeup of that change from year to you, and how long do you barrel and bottle age that before it hits the shelves? I see some of your other reds are priced higher, but I assume that one is your flagship?

Q, My one question I ask everyone. How has this past year been for you and the winery? More exhausting? Will there be anything you adopted during the pandemic that you can see continuing even after things settle down?

A, This past year was challenging, but not without its silver linings. First and foremost, I’m happy to say that my family and all of our staff are healthy and well. I know people who weren’t as lucky, which is a tragedy. In quarantine, we had the opportunity to do a lot of thinking and planning, which has been a good thing. We also had fun adding 20 chickens and a large garden to the farm.

The winery had to adapt quickly after New Jersey was shut down in March. We did as much as we could online with E-commerce and virtual tastings, as well as at the winery with curbside pickups, drive-through events, and online social gatherings, to provide some much-needed community among our followers. In the middle of June, we were permitted to have outdoor seating. It was slow to start but became popular as we got into the summer. We’re very fortunate to have our huge outdoor area outside the winery to accommodate people safely. There are certainly things that we started doing during the pandemic that we’ll continue going forward, such as requiring reservations for tables and offering wine flights [as a substitution for pouring tastings at the counter], which customers really seem to enjoy. Instead of holding our large festivals a few times in the summer, we did much smaller, safer evening events every weekend, with a food truck and a musician on stage. People really appreciated these evenings out, and we’ll be continuing them this summer as well.

Home Videos The WORLD of WINE – Wine News. Cheap wine, tasting notes and cooking with wine The World of Wine – May 2021 … END_OF_DOCUMENT_TOKEN_TO_BE_REPLACED

How to visit Napa Valley on a Budget. In this video Carson and I explain a few ways to enjoy Napa on the cheap. Tip and advice about how to visit Napa … END_OF_DOCUMENT_TOKEN_TO_BE_REPLACED

Home Videos Get To Know Argentina Wine | Wine Folly If you love Malbec, Argentina is your ultimate wine region. But that’s not … END_OF_DOCUMENT_TOKEN_TO_BE_REPLACED