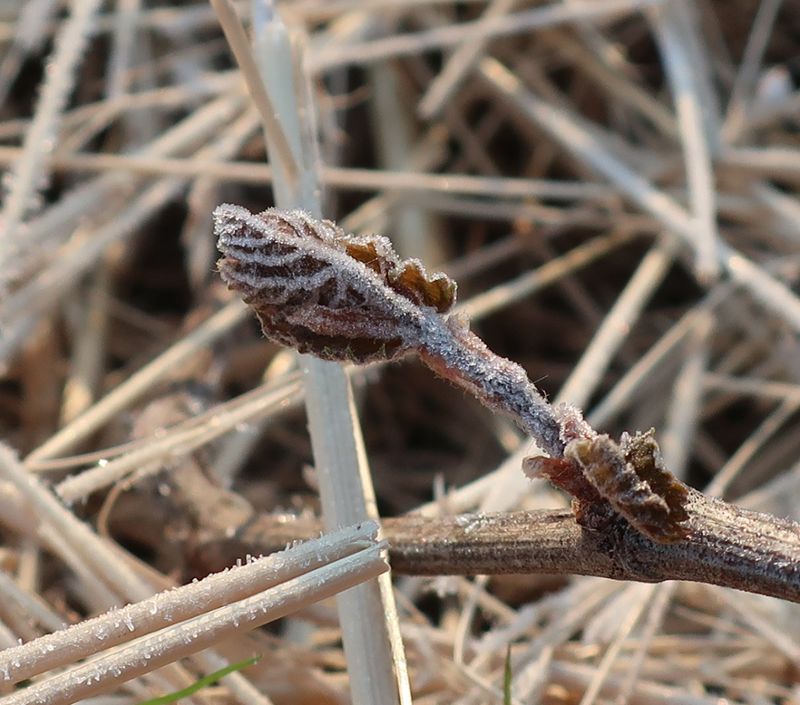 When temperatures warm up in late March and early April in the Midwest and East, grape growers start to cross their fingers and hope the pleasant weather won’t be followed by Spring frosts or freezes that will damage grapevines that go through bud burst early. The frost event that hit vineyards in North Texas and the High Plains with record-breaking low temperatures on the night of April 20-21 also impacted vineyards from Missouri and Michigan to New York and Pennsylvania. While Texas had a one-night event, the cold temperatures in other states lingered for two nights in many places.

Hardest hit were vineyards in Missouri and Ohio. According to Dr. Dean Volenberg, director of the Grape and Wine Institute at the University of Missouri, there was widespread damage because many of the grapes in Missouri vineyards were post bud swell, and there were not one, but two nights in a row of freezing weather. In some places, the cold temperatures lasted for eight hours. One grower north of Columbia in central Missouri told Volenberg his Marechal Foch was post bud break and temperatures had dropped to 24° F. Another grower in Macon County reported at low of 21° F.

Missouri had a frost event on April 18, 2020, and Volenberg noted that growers, especially at the larger wineries, this year left 30 percent more buds than normal when pruning because of the low production after last year’s freeze. He pointed out that bud break was uneven within vineyards and across the state – while Riparia vines experienced bud break two weeks ago, Norton in many places was just at bud swell. For some, “it won’t be too bad.” For others, “there may be widespread damage because the grapes were post bud swell.”

Gene Sigel, vineyard manager at Debonné Vineyards in Madison, Ohio, told Wine Business Monthly that it snowed between 6” and 12” in northeastern Ohio on Tuesday April 20 and that nighttime temperatures dropped to 28°-30°F. “Many vineyards [in the region] have wind machines, but we’re not prepared to use them when there’s snow on the ground,” he said. “It was really atypical to have that much snow and be cold so long. 1” long buds froze solid – they crumble in your fingers.” Concord and Niagara grapes sustained the most damage on both the best and the worst sites because the buds were out. Vinifera buds, in contrast, were matchhead size, and as an extra precaution, those grapes had been pruned to four canes, not the usual two at Debonné Vineyards.

What concerns Sigel is that “we’re early in the frost season – it can go into the second week in May, with the last frost about May 20. It may not be over.”

Todd Steiner, research associate in the department of horticulture and crop science at The Ohio State University/OARDC, reported that the research vineyard in Wooster, Ohio, had 4” to 5” of snow on April 20 that provided some insulation to the vines during the night. The following day temperatures went into the mid-40s, the snow melted and there was no insulation for the second night of frost.

He commented that Ohio had had temperatures from the mid-20s to low-30s, and that growers were seeing some damage. “It depends on the region, and on bud break. Time will tell.”

The vineyards near Traverse City, Michigan are far enough north that the grapes had not yet pushed, according to Dave Miller, owner of White Pine Winery in Laxton, MI, in the southwestern region of the state, and the president of the Michigan Wine Collaborative. He noted that while a nearby weather tower had recorded a low of 25° F on the morning of April 21, the lows in his vineyard were about 27° to 28° F on the nights of April 20 and 21. The first night was quite windy, but the second night was less so.

While buds had started to swell on Concord and some hybrids, Riesling and Cabernet Franc push at a later date. Miller noted that the Riesling and Cabernet Franc vines he planted in 1999 have done fine on his site, in contrast to Chardonnay. As of April 23, he had not seen any damage in his vineyard, but that “it takes time for browning to occur. We’ll have to wait and see – I think it’s not a disaster.” Growers of peaches and cherries may not be so lucky, as those orchards were in full bloom.

Dave Stamp, vineyard manager and one of the owners of Lakewood Vineyards in Watkins Glen, New York, said that temperatures were at 28° F on April 21 and 30° F on April 22. “Things were not out too far,” he commented. “It went only briefly to 28° F. The Labrusca – Concords and Niagara – look good and so does the Baco. I was tying up the Cabernet Franc and didn’t find too much damage. I had expected a bit worse.” Unlike Ohio, the Finger Lakes did not get much snow, only “flurries with a bit on the grass.”

Temperatures just north of the Lehigh Valley in Pennsylvania did not drop much below freezing on either the night of April 20-21 or 21-22. Sarah Troxell, co-owner and winemaker of Galen Glen Winery in Andreas, PA, noted that buds were pushing on the younger vines, but lows went only to 30° and 32° F. Her husband, Galen Troxell, also co-owner of the winery, agreed that three-year-old vines were out more, but the damage from frost in 2020 was much worse when sustained winds accompanied temperatures of 28° to 29° F. He commented that they practice “spare parts viticulture,” and this year left two times the number of buds when pruning as last year. “We may have lost a little, but hopefully it won’t be debilitating,” he said.

Cain Hickey, viticulture extension educator at Penn State University, commented that temperatures across the state were not as cold as they might have been. “Buds were tight in many places, and things were not far enough along to be damaged too much. We’ll hope only a small percentage of the vines will have damage. If another cold system comes through after the warmer temperatures predicted for next week, the damage will depend on the cultivar, the micro-climate, how advanced the buds are, and how cold it gets.”

Dr. Joe Fiola, extension specialist in viticulture and small fruit at the University of Maryland Extension, reported that temperatures on April 20-21 and 21-22 did not drop below 34° or 35° F in Maryland. “Overall, we may have escaped,” he said. “Temperatures were near freezing but not as low as had been expected.” He noted that vines growing on the Eastern Shore of Maryland broke bud two weeks earlier, but temperatures along the coast during the frost event were warmer than farther inland.

The weather in northern Virginia was similar to that in Maryland. Jim Law, owner of Linden Vineyards in Linden, Virginia, told Wine Business Monthly that there had been no frost that week. It went down to 33° F on April 20-21 and to 36° F the following night.

The frost event in North Carolina was more variable than in Virginia. Steve Shepard, winemaker and general manager of RayLen Vineyards and Winery in Mocksville, North Carolina, reported that some vineyards in the state were not hit at all, some had minor damage and others where buds were out were hit harder. There was at least on case where one vineyard with 4” to 5” shoots on the vines had no frost problems while another vineyard a few miles away had major frost damage. At RayLen, Cabernet Sauvignon had 2” to 3” shoots, as did the Chardonnay, Cabernet Franc, Pinot Gris, and Vidal. Their Petit Verdot, which was out more than the Cabernet and Cab Franc, sustained more damage than the two Cabs.

Shepard is hoping the region doesn’t get another frost in April. By May 1, he said, “We’re 95 percent out of the woods.”

Home Videos The WORLD of WINE – Wine News. Cheap wine, tasting notes and cooking with wine The World of Wine – May 2021 … END_OF_DOCUMENT_TOKEN_TO_BE_REPLACED

How to visit Napa Valley on a Budget. In this video Carson and I explain a few ways to enjoy Napa on the cheap. Tip and advice about how to visit Napa … END_OF_DOCUMENT_TOKEN_TO_BE_REPLACED

Home Videos Get To Know Argentina Wine | Wine Folly If you love Malbec, Argentina is your ultimate wine region. But that’s not … END_OF_DOCUMENT_TOKEN_TO_BE_REPLACED