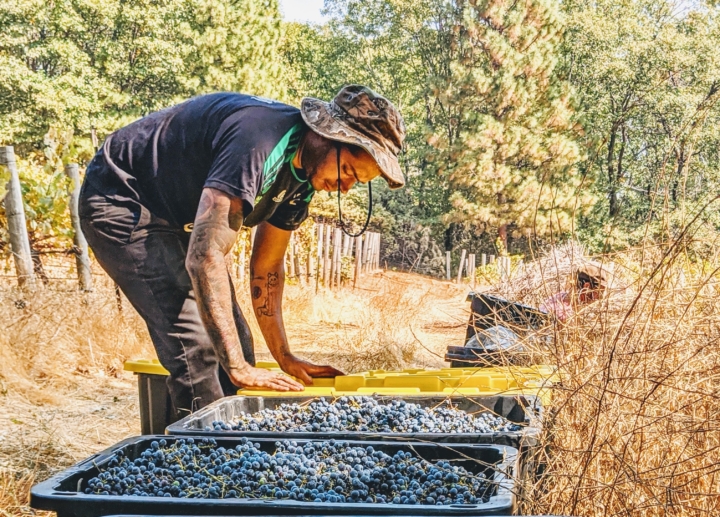 You know the proverb “slow and steady wins the race”? Well for Andres Giraldo Florez, chef-owner of the soon-to-open Snail Bar in Oakland’s Temescal district, it has certainly been a slow, steady, if not slightly meandering snail trail, if you will.

When I first spoke with Florez in September 2020, he was waiting to pass inspection on his closet-turned-wine bar at West Oakland’s Classic Cars West. The bar was stocked with natural, organic and biodynamic vintages from all over the world and the food menu was set with comforting, seasonal bites using ingredients sourced from small, local producers. Florez was filled with palpable excitement at the time — he had forged a partnership with Slow Food East Bay’s Sister Farms, which works with regional farms owned by Black farmers and other underrepresented communities impacted by COVID-19.

At Snail Bar, Florez planned to marry his obsession with natural wines and his pedigreed culinary career, having worked in the kitchens of some of the world’s finest restaurants, including San Francisco’s Saison, Chicago’s Alinea, New York City’s wd-50 and San Sebastian, and Spain’s Mugaritz (currently ranked seventh by The World’s 50 Best Restaurants). When talking to Florez, one couldn’t help feel that Snail Bar was going to be something special.

But six days after my initial conversation with Florez, Snail Bar’s Instagram declared that it was closed until further notice. Promising that this was “see you soon, not goodbye,” the wine bar was moving… somewhere.

Florez is no stranger to unexpected moves or spontaneous situations. He grew up in a farm-like setting situated at the bottom of a mountain in Medellín, Colombia, until he was 10 years old, when the guerilla group Revolutionary Armed Forces of Colombia (FARC) moved into the area, forcing him and other locals to flee. Florez lost his family home, but no one would be able to take away what he learned from his upbringing there. Growing up on his family’s land instilled in him a value for and love of organic, local, slow food.

“There were berries, cacao plants, tons of fruit trees,” he recalled of his mountain-side homestead, “and analyzing it as I’ve grown up it’s like, I’ve only eaten organic food my whole life. It was the only way we knew how to eat.

“I think it was almost embedded in my DNA. Like I know of no other option.”

For 10 years, Florez had a semi-nomadic career working in some of the finest kitchens, where he used the freshest local ingredients possible and learned the nuance of quality conventional wines. But he didn’t discover his passion for organic, biodynamic vintages until 2014, when he stumbled upon a random bar in Portugal during a spontaneous road trip.

Florez caught the bar owner just as he was closing up shop, and the two struck up a conversation. Before he knew it, Florez was having an impromptu natural wine tasting as the owner educated the young chef on the minimal-intervention, grape-based commodity.

“Why would I stress about buying organic carrots when I’m, you know, drinking garbage wine?’’

“It was just like a mind-blowing moment for me where I was like, why would I stress about buying organic carrots when I’m, you know, drinking garbage wine?’’ Florez said of his epiphany, adding that he would be a hypocrite if he only cared about serving the best on a plate and not in a glass. “That was really a sparkling moment for me to continue what I was doing.”

Now as a dedicated and avid natural wine drinker for the past several years, and having put down roots in the Bay Area, Florez’s new mission is to combine slow food with natural wines at a bar and eatery he can call his own; a place where he hopes to inspire a similar “aha” moment to the one he had in Portugal.

“The biggest thing about wine is that you’re buying, essentially, a story per bottle,” said Florez. So rather than describing the wines on the Snail Bar menu by tasting notes, he will focus on the vintners who made them and each bottles’ geographic origins.

For the chef, educating the public about the small families growing and making a single, beautiful vintage one time a year, and knowing that “what you’re consuming is 100% hand-harvested … that’s so special,” especially when juxtaposed next to conventional wine grapes that are sprayed with chemicals and harvested using machines before being bottled up with a slew of additives.

“I just want to educate as many people as I can… to keep people wondering and keep coming back for it,” Florez said.

But, wait. Where can people “keep coming back for it”?

A few weeks ago, after several months of hibernation, I heard from Florez that he had found a better opportunity in the building previously occupied by Stay Gold Deli in Oakland’s Temescal neighborhood (and as many locals still remember, the Sacred Wheel Cheese Shop before that). Snail Bar’s new home, slated for an April opening, boasts a corner spot along Shattuck Avenue with outdoor seating and a much larger kitchen, an exciting development for Florez, who will be able to flex his culinary prowess a bit more through an expanded menu packed with “super delicious and well-executed” comforting dishes — like his ham and cheese sandwich made with Comté and French ham, or a seasonal selection of sea urchin, scallop crudo or clams and oysters.

And while the ideas for his food offerings have shifted, including different apéro and dinner menus, the intention behind the space will still be the same — to use fresh, seasonal produce, source food products from small, regional purveyors and showcase fantastic natural wines. And “slow” is definitely the name of the game.

But at the end of the day, Florez’s goal is to make Snail Bar’s wines approachable enough where the only thing diners and imbibers are there to do is “eat good food and drink good wines.”

Snail Bar will be at 4935 Shattuck Ave. (at 51st Street), Oakland. Stay tuned for an opening date. Until then, Snail Bar is offering online orders from its virtual store with free local delivery in the East Bay.

Home Videos The WORLD of WINE – Wine News. Cheap wine, tasting notes and cooking with wine The World of Wine – May 2021 … END_OF_DOCUMENT_TOKEN_TO_BE_REPLACED

How to visit Napa Valley on a Budget. In this video Carson and I explain a few ways to enjoy Napa on the cheap. Tip and advice about how to visit Napa … END_OF_DOCUMENT_TOKEN_TO_BE_REPLACED

Home Videos Get To Know Argentina Wine | Wine Folly If you love Malbec, Argentina is your ultimate wine region. But that’s not … END_OF_DOCUMENT_TOKEN_TO_BE_REPLACED