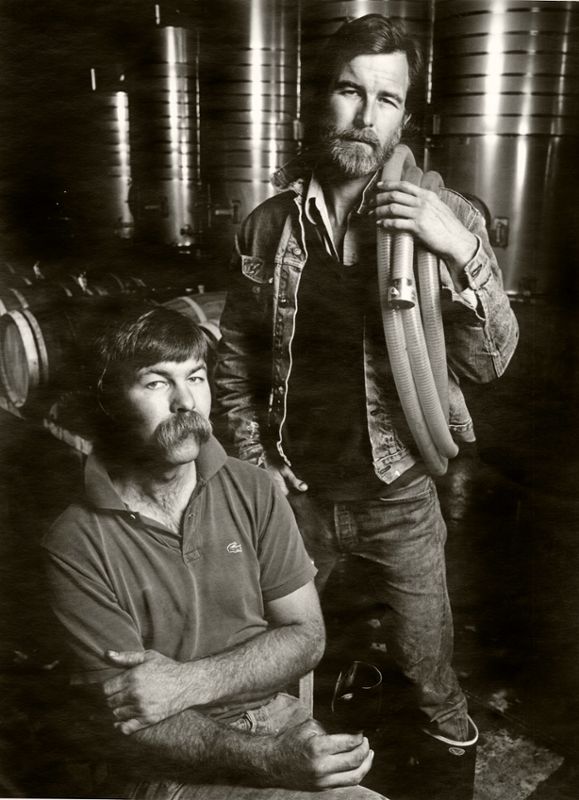 St. Helena – Smith-Madrone launches a year of 50th anniversary celebrations on May 14. It was on May 14, 1971 that founder Stuart Smith signed the paperwork to close on the purchase of 200 forested acres on top of Spring Mountain in the Napa Valley.

To celebrate this milestone anniversary, Smith-Madrone has dug deep into its cellar and will be re-releasing wines on the 14th of every month through the anniversary year. In May there will be a six-bottle vertical of Cabernet Sauvignon, a horizontal collection of 2013 Chardonnay, Cabernet Sauvignon, Riesling and Cook’s Flat and several other unusual wines. The re-released wines are very limited in availability and will appear on a specially designated page on the winery’s website.

The winery will also offer a monthly Zoom tasting and discussion with the winemakers: the first one will be June 12 at 4:00 p.m. (PST). Stuart, his brother, winemaker Charles Smith, and Stuart’s son Sam, the assistant winemaker, will open wines and taste and discuss them with the Zoom attendees. Considering their almost 110 years of combined experience, the Zooms should be quite entertaining and informative.

Another element of the year-long 50th anniversary celebration is a collaboration with Pt. Reyes-based Cowgirl Creamery, whose production values mesh closely with Smith-Madrone’s beliefs. Purchasers of any of the winery’s wines will receive a discount code to use for purchases of Cowgirl Creamery’s artisanal cheeses. The winery specifically recommends the Cowgirl Classic, which consists of Mt. Tam, Pierce Point and Wagon Wheel.

“It was in the fall of 1970 that I first walked the dense forested property that would become Smith-Madrone,” Stu Smith explains.  All that remained of the original vineyard planted in the 1880s were small redwood grape stakes and a towering allée of olive trees competing for sunlight with the 100-foot tall Douglas fir trees. “The wine industry has seen many changes in the 50 years since we carved Smith-Madrone out of the forested mountain top.  Napa Valley wine has evolved from a small provincial business, second in economic importance behind livestock, to an industry of worldwide pre-eminence.  While there have been many technological advances in both viticulture and enology, the fundamental of great wine remain the same: climate, soil, site and a sound understanding of science,” he adds.

Charles Smith joined Stu at the winery in 1972. “We knew being in the mountains would differentiate Smith-Madrone from the wineries on the floor of the Napa Valley and we valued and nurtured that difference,” he explains. “The success of our Riesling is due altogether to being in the hills at altitude,” Charles said recently.

Sam Smith joined the winery in 2010. “After working harvest around the world, including at Dr. Loosen in Germany, I brought new opinions and expertise to what my father and uncle had been doing,” he said.

All of the winery’s wines are made from the estate vineyards surrounding the winery, originally planted 49 years ago by Stuart and Charles. The vineyards are primarily dry-farmed on steep mountainsides surrounding the winery on top of Spring Mountain in the Napa Valley. At elevations between 1,300 and 2,000 feet, the vineyards extend in steepness up to 35% slopes. With its signature deep red Aiken loam soil, Smith-Madrone is located near the top of the Spring Mountain District appellation.

The winery has been recognized as a pioneer of mountain grape growing and winemaking for many reasons:

Smith-Madrone’s first vintage of Riesling, the 1977, won Best Riesling in the Wine Olympics, an international tasting organized by the food and wine magazine Gault Millau in Paris in 1979. This accolade launched the winery’s identity as a pre-eminent producer of Riesling in the United States.

Among many other accolades, Smith-Madrone’s Riesling was named one of the best 20 Rieslings in the world and the only one referenced in North America by British wine writer Stuart Pigott in his 2014 book, The Riesling Story: Best White Wine On Earth.

In 1983, Smith-Madrone was the first American Riesling producer to use only the name Riesling on its labels. No other winery did this for the next 15 years. Stu had an extended battle with the then-BATF to change the label from Johannisberg Riesling to Riesling. He explains, “While White Riesling is legally correct, it is none-the-less both wrong and redundant – when was the last time you had a red Riesling?  This is just one example of our commitment to this wonderful and somewhat overlooked varietal.”

The winery was named Winery of the Year by The Daily Meal in 2014.

The winery regularly re-releases wines from its library, and may have been the first winery in the U.S. to re-release winery-cellar-aged/library Rieslings. Last fall the winery offered a 6-bottle vertical of Riesling for sale.

In 1972 when planting the vineyard, Stu and Charles Smith planted the first twenty acres (5 acres each of Cabernet Sauvignon, Chardonnay, Riesling, Pinot Noir) on their own roots, which was unusual at the time.

Stu chaired the 1986 Napa Valley Wine Auction and was one of the co-chairs of the 2005 Auction (in honor of its 25th anniversary).

In 1992 Charles Smith played in a croquet match in Newport, Rhode Island, against the Japanese champion, Ichiro Nagashima, which set a record for longevity. It last seven hours and thirty-five minutes. Charles won the game.

Twice Stu has been named to key committees by the Napa County Board of Supervisors, for the 2008 General Plan Steering Committee and the 1998 Napa River Watershed Task Force.

In 2003-2004 Charles joined the Board of Directors of the Napa Valley Land Stewards Alliance, which was instrumental in the defeat of the highly contentious Measures 0 and P.

Stu has created two blogs to address the public discourse around land use and agricultural issues: in 2010 he founded www.biodynamicsisahoax.com and in 2018, www.stopmeasurec.com.

James Conaway released his book The Far Side of Eden: New Money, Old Land and the Battle for Napa Valley in 2002: Stu was one of the key vintners who was profiled.

In 2010 the winery introduced its first reserve wine, the 2007 Cook’s Flat Reserve. Each wine is numbered and presented in a multi-color tissue which reproduces the estate’s deed, signed by President Chester Arthur in 1885.This wine has its own website.

In 2010 Stu’s son Sam Smith joined the winery as assistant winemaker, having worked harvests in Germany, Australia, New Zealand, Washington State and Carneros; in the off seasons he worked at upscale restaurants in Martha’s Vineyard, the Virgin Islands and Australia.

In 2006 Charles Smith began writing the weekly harvest report for the Spring Mountain District for The St. Helena Star; Stuart took over in 2012.

In 2018 Stu was named one of Wine’s Most Inspiring People as a pioneer and champion of hillside grape growing, by Wine Industry Advisor.

In 2020, Smith-Madrone was chosen by the University of California, Berkeley, to be the only winery offering a virtual wine tasting to the attendees of Homecoming events: Stu was honored as an alumnus of the class of 1970.

From September 27 until October 3, 2020, the winery battled the Glass Fire, which was documented almost daily on the winery’s Instagram page with photos and videos Stu took and later, by Food & Wine Magazine in a documentary short film. Among other impacts—respecting the enormous damage all over Spring Mountain and the northern Napa Valley—the winery lost telephone service for the next 100-plus days.

Smith-Madrone will be profiled in an episode of the Behind The Glass series on SommTV, with the segment airing in June 2021.

Sam Smith will introduce his own wine, Curly St. James, in the summer of 2021.

Home Videos The WORLD of WINE – Wine News. Cheap wine, tasting notes and cooking with wine The World of Wine – May 2021 … END_OF_DOCUMENT_TOKEN_TO_BE_REPLACED

How to visit Napa Valley on a Budget. In this video Carson and I explain a few ways to enjoy Napa on the cheap. Tip and advice about how to visit Napa … END_OF_DOCUMENT_TOKEN_TO_BE_REPLACED

Home Videos Get To Know Argentina Wine | Wine Folly If you love Malbec, Argentina is your ultimate wine region. But that’s not … END_OF_DOCUMENT_TOKEN_TO_BE_REPLACED