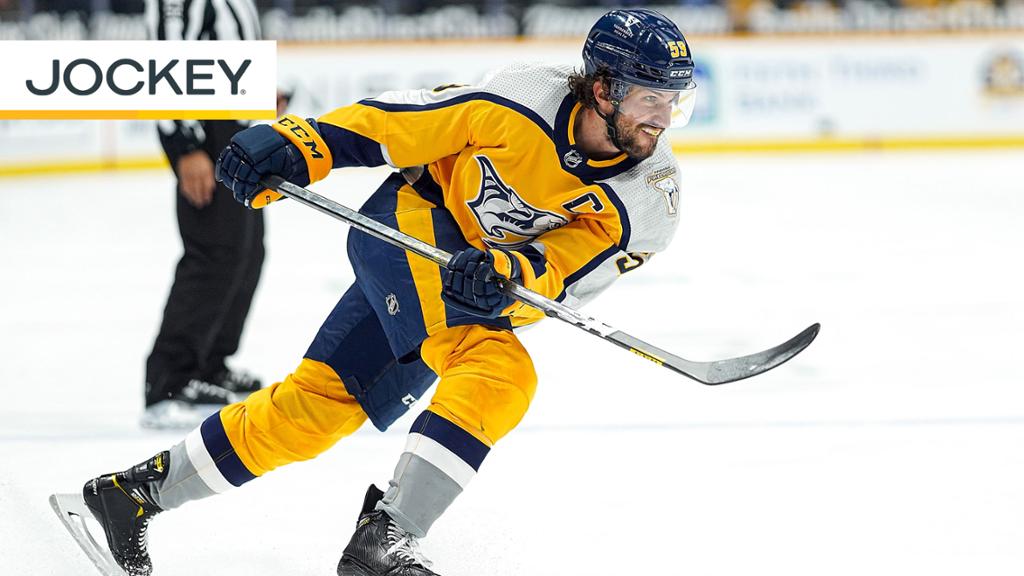 Born in Bern in 1990, Josi has spent his entire 664 game career with the Predators after being drafted by Nashville in 2008. Most of those 435 points have come over the past seven seasons, including a career-high 65 in 2019-20 which led to that Norris Trophy win.

Residing from a country with only 12 active NHL players – and just 43 in League history – it comes as no surprise Josi is good friends with the man he passed on the list, former blueliner, and the only other Swiss-born NHL captain, Mark Streit.

“It’s a huge honor,” Josi said after tying Streit last week with point No. 434. “Me and Mark are really good friends. He did so much for Swiss hockey, because we never had a player that really made it in the NHL. We had a couple goalies, but he was the first guy [who really had] a big role on a team. He was a star in the League, so for us as young kids, we all looked up to him and he kind of gave us that belief that it’s possible for Swiss players to make it. Now, we have a lot more players in the League, and he kind of took me under his wing when I came into the League. I started training with him, he’s an unbelievable person that is a really good friend and he’s always been a huge role model for me.”

Nino Niederreiter, Timo Meier and former Preds forward Kevin Fiala round out the Top 5 Swiss point-getters, but Josi has a sizeable lead and figures to have plenty of years left to solidify his spot at the top of the list among his fellow countrymen.

However, just as Josi watched Streit all those years ago back home, there’s no doubt another young Swiss player is dreaming of being like Nashville’s captain one day.

That’s about as good of a role model as one can choose.

“First and foremost, what a tremendous accomplishment,” Preds Head Coach John Hynes said of Josi’s feat. “To be a Swiss-born player, to come over to the National Hockey League and wind up being the all-time leader in points; there’s been guys that have come prior to Roman that have led the way and, and have had great NHL careers, but it’s a special thing to be the No. 1 guy in in your country. Swiss hockey is really producing more and more players and being a much more competitive country on the international stage, and Roman’s a big part of that. I know he loves his country, it’s where he was born and raised… and that’s when you really sit back and think about that. That’s a tremendous accomplishment.

“Not only as good of a player as Roman is, but the type of person that is to represent the Nashville Predators, to represent the city of Nashville, the country of Switzerland, they can’t ask for a better person… He brings so much to our team on and off the ice that he’s not only a special player, but I think we should all recognize the type of person and character that he has as a human being.”

Josi is also one of many Preds players to become fathers this season – some for the first time – and Viktor Arvidsson is the newest member of the dads’ club.

Arvidsson and his wife, Moa, welcomed a baby girl – Navy Celie Arvidsson – to the world last week, joining teammates Matt Duchene, Pekka Rinne, Brad Richardson, Josi, Mattias Ekholm and Calle Jarnkrok that have all added a member to the family in recent months.

Congratulations to the Arvidssons and all the Preds dads and families who have grown this season.

Tweet from @PredsNHL: Another beautiful #Preds baby to welcome! Congratulations to the Arvidsson family on the birth of their baby girl, Navy Celi�� Arvidsson! 💕 pic.twitter.com/d7zabs0yPQ

The pandemic hasn’t slowed constant efforts to help the community from the Nashville Predators Foundation empowered by SmileDirectClub, and there are new ways for you to help.

A trio of unique events get underway in April, starting with a Wine Tasting at Puckett’s on April 21.

The Foundation has put a different spin on their traditional Wine Festival and fans are invited to Puckett’s for a dinner and wine tasting. The event will feature five varietals of wine paired with dinner, and guests will also enjoy watching the Preds take on the Blackhawks on television during the event. Tickets are on sale now at NashvillePredators.com/wine.

Three nights later, a Virtual Tasting presented by Deacon’s New South gets underway with a wine or bourbon tasting with family and friends from the comfort of your home via Zoom. The Foundation is hosting the virtual event, which will feature five varietals of wine or bourbon and a charcuterie board for guests to share provided by Deacon’s New South. A representative for each wine and bourbon will be present on the Zoom calls to talk about each varietal and answer questions. Tickets are on sale now: NashvillePredators.com/wine.

Finally, celebrate Cinco de Mayo with the Predators at Topgolf Nashville on Wednesday, May 5, from 6-9 p.m. CT for the Foundation Fiesta, presented by Kroger. A ticket includes three hours of golf, food and drinks and the opportunity to win prizes including autographed memorabilia, all while cheering on the Preds as they take on the Columbus Blue Jackets in the last road game of the regular season. Tickets are on sale now: NashvillePredators.com/fiesta.

With the Milwaukee Admirals electing to sit out the 2020-21 season in the AHL, the Predators are utilizing an agreement with the Carolina Hurricanes and the Chicago Wolves to serve as Nashville’s AHL affiliate this season.

Chicago has won six-straight games, including a 5-2 result over Grand Rapids last Thursday and a 4-2 victory against Rockford on Saturday. Richard tallied twice in Thursday’s win, while Jeannot and Allard also found the back of the net. Tomasino had two assists on Thursday, and Evangelista recorded his first professional point with a helper on Allard’s goal. Jeannot also scored on Saturday, as did Smith, and Tomasino added another helper in the win, while Malone recorded two assists.

Tweet from @Chicago_Wolves: Missed our win last night due to other fine sporting events? (And user error this morning on the Twitters?)No worries! NOW you can enjoy this lovely @Hefty Highlight Reel that recaps our sixth straight W.#WeAreTheWolves pic.twitter.com/CBYR3UYVOU

Jeannot continues to lead the Wolves with nine goals and 19 points in 12 games, and with Tommy Novak on Nashville’s taxi squad, Tomasino slots second with 15 points in 15 outings. Chicago leads the Central Division with 14 wins and 29 points, the fourth-highest point total in the AHL.

Geico Inside The Play:

Take a look behind the scenes as Predators Play-by-Play broadcasters Willy Daunic calls some of Nashville’s recent goals with Geico Inside The Play.

Goal of the Week:

Assist of the Week:

Quote of the Week:

Preds defenseman David Farrance after signing his entry-level contract on the potential to live and play in Nashville:

“It’s one of the best cities you could play in, and the energy and the vibes here are unbelievable. I remember watching the [2017 Stanley Cup Final] a while back and just how crazy it was in the building. I didn’t go to a game, but you could just tell on TV. I’m sure it didn’t do it justice, but it just seemed like the building was rocking, and the fans are great… It’s a great city. I love the city and the fans seem amazing – one of the best fanbases in the NHL.”

Shots of the Week:

The Predators use a six-game winning streak to catch up with the Blackhawks in the standings. The playoff push is on with six weeks to go in the regular season. Comedian Nate Bargatze joins the podcast to discuss growing up in Nashville, being a fan of the Preds and working in stand-up comedy. Plus, Brooks Bratten and Thomas Willis look ahead to the trade deadline and discuss the signing of defenseman David Farrance.

Saros, Preds Bounce Back to Shut Out Blackhawks, Keep Fourth in Central

Win Streak Concludes at Six as Preds Fall to Stars

Home Videos The WORLD of WINE – Wine News. Cheap wine, tasting notes and cooking with wine The World of Wine – May 2021 … END_OF_DOCUMENT_TOKEN_TO_BE_REPLACED

How to visit Napa Valley on a Budget. In this video Carson and I explain a few ways to enjoy Napa on the cheap. Tip and advice about how to visit Napa … END_OF_DOCUMENT_TOKEN_TO_BE_REPLACED

Home Videos Get To Know Argentina Wine | Wine Folly If you love Malbec, Argentina is your ultimate wine region. But that’s not … END_OF_DOCUMENT_TOKEN_TO_BE_REPLACED