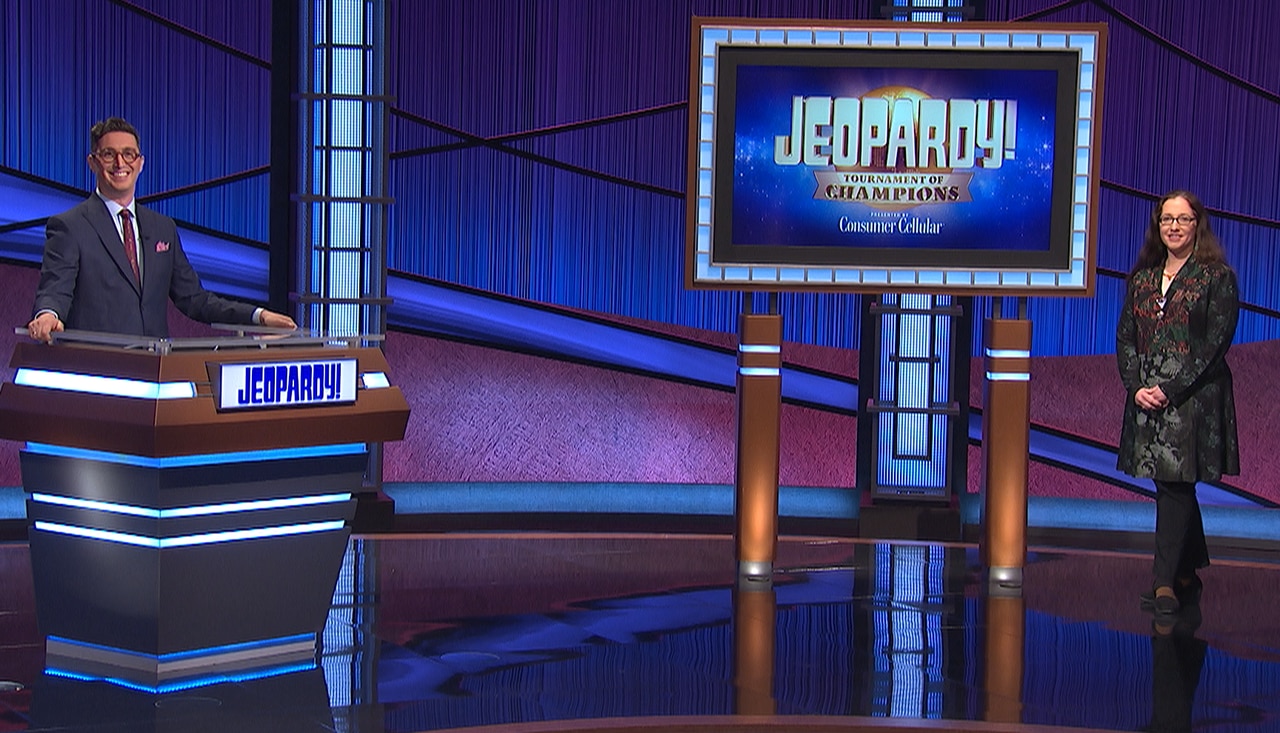 One of the greatest “Jeopardy” contestants ever hasn’t lost her touch as she dominated the Double Jeopardy round en route to her victory in tonight’s Tournament of Champions quarterfinals match.

Jennifer Quail, who is a wine tasting consultant from Dowagiac, won $228,800 during her eight game run in December 2019 making her the second-most successful female contestant ever in regular play. Tonight, she took on two other former champions.

This year’s tourney began on Monday. The quarterfinals are all week with the semis beginning on Monday the 24th. The two-day finals are Thursday and Friday the 27th and 28th. The winner receives $250K with second and third earning $100K and $50K.

Quail got off to a good start and her momentum continued when she landed on the only Daily Double of the round giving her a commanding lead. At the end of the Jeopardy round, she had $5,100, Ryan Hemmel had $3,600 and Paul Trifiletti was in third with $2,200.

What a start for Hemmel in this round. He landed on the both Daily Doubles back to back. The first one, he doubled his scored, but lost $3,000 on the next one. Quail pretty much dominated the Double Jeopardy round after that. When it was all said and done, she was in first place with $17,900, followed by Hemmel with $10,200 and Trifiletti with $5,800.

The clue: Of the six countries that border the Red Sea, it’s last alphabetically. What is Yemen?

Congratulations to Quail who will now play in the semis which begin on Monday. The two-day finals are on next Thursday and Friday.

Two more players out of the 15 contestants in this tournament are from Michigan. Ben Henri is a 7th – 12th grade vocal music teacher from St. Clair Shores. He won the “Jeopardy” Teacher’s Tournament last June, taking home the $100,000 grand prize. His quarterfinal game is tomorrow night.

Andy Wood, who is a comedian from Ann Arbor, was a four-time “Jeopardy” champion last November, earning $91,999. His match is this Friday.

Winners of the quarterfinals, as well as four wild card players with the highest scores, will all advance to the semis. The three players who win the semifinals will face off in the two-day finals.

Former champion, Buzzy Cohen, who was given the nickname “Mr. Personality” by Alex Trebek, is the guest host for the tournament.

She did it! Michigan high school girl earns spot in “The Voice” finale

3 of ‘Jeopardy’s’ 15 Tournament of Champions contestants hail from Michigan, going for $250K

Chef Gordon Ramsay was spotted in the U.P. and we know why

Home Videos The WORLD of WINE – Wine News. Cheap wine, tasting notes and cooking with wine The World of Wine – May 2021 … END_OF_DOCUMENT_TOKEN_TO_BE_REPLACED

How to visit Napa Valley on a Budget. In this video Carson and I explain a few ways to enjoy Napa on the cheap. Tip and advice about how to visit Napa … END_OF_DOCUMENT_TOKEN_TO_BE_REPLACED

Home Videos Get To Know Argentina Wine | Wine Folly If you love Malbec, Argentina is your ultimate wine region. But that’s not … END_OF_DOCUMENT_TOKEN_TO_BE_REPLACED