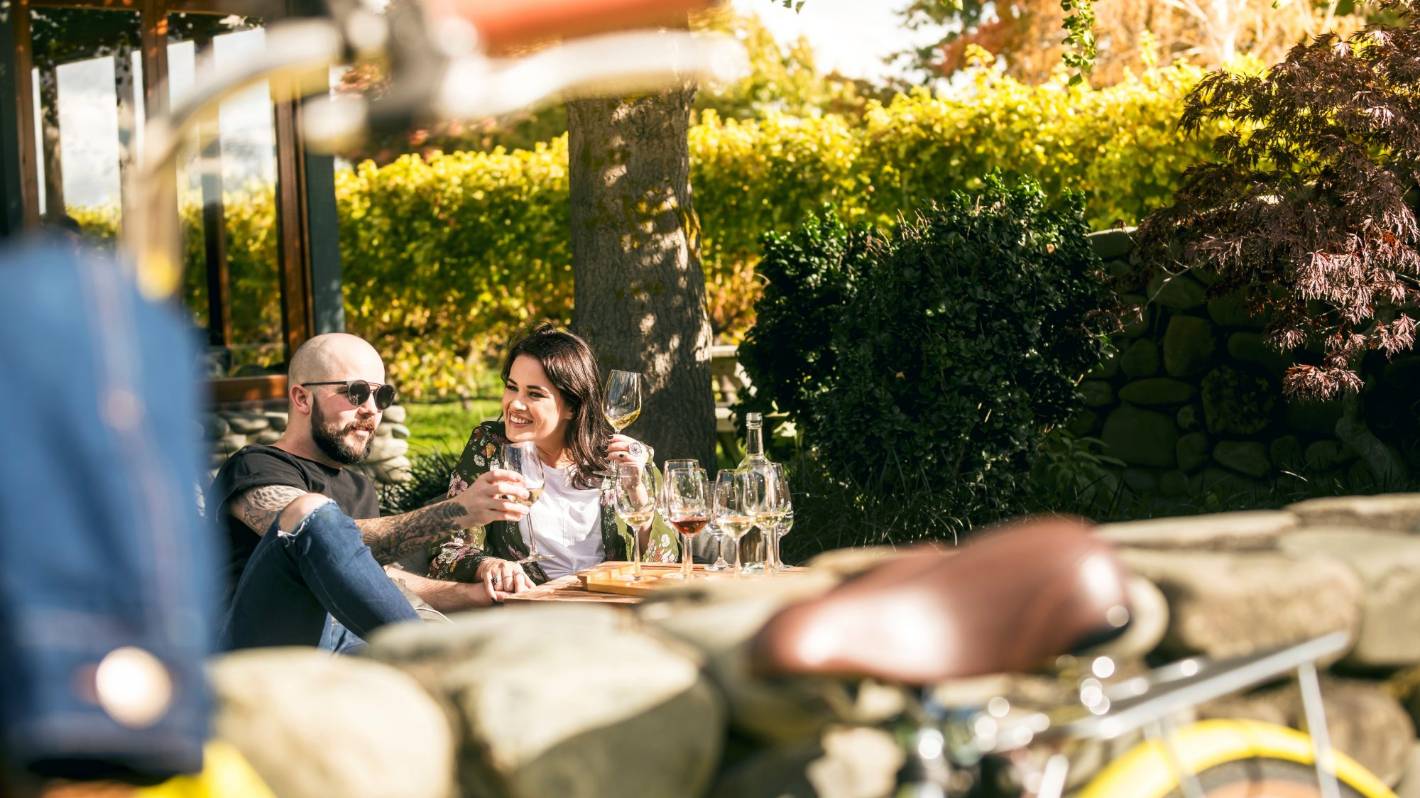 The fast-growing town of Cromwell has mountains, a stunning lake, vineyards, cherry picking and loads of adventure activities. It’s just missing the crowds.

Many of New Zealand’s small towns shine brightest when the summer sun does, not least because you can take a dip or eat al fresco without making yourself sick.

With some of the best weather of the season still ahead of us, all going well, events calendars are in full-swing, promising entertainment ranging from music, busking and food and wine festivals to a Viking-style soirée.

Here is our pick of small towns to try to make it to before the weather turns, and they look – to some eyes at least – kind of dark and depressing. There’s a lot about food and wine, but ‘tis (still) the season after all. That’s what we’re telling ourselves anyway.

Visitors to this Marlborough Sounds town tend to have fairly one-track minds: How to taste as many wines at as many vineyards as they can in their time though. This February though, their minds are likely to be on two perfectly aligned tracks: wine and cheese.

Renwick is set to hold the first South Island Cheese Festival on Waitangi Day (February 6) and it’s shaping up to be well worth travelling for. The idea is “for people to come, try cheeses and then buy enough to create picnics to have on the lawn or in the vines, listen to music, spend the day here just learning all about cheese,” according to Hannah Lamb of Picton cheese maker Cranky Goat.

Held at Clos Henri Vineyard, the free festival will feature cheeses by six local manufacturers – Marlborough’s cheese making history dates back 150 years – cheese-making workshops and food by the likes of the Fest Merchant food truck, Craft Pate, Proper Crisps and Drop the Beet. And wine of course. Lots of it.

Like all of Marlborough, Renwick is a magical place to be in summer, with vines and orchards laden with sun-ripened fruit. One of the best ways to explore is to hire a bike and pedal from vineyard to vineyard across the mercifully flat terrain. There are more than 30 cellar doors to choose from, some of which also serve outstanding lunches. What better way really to enjoy the last of the summer wine?

Can’t see yourself making it to Norway any time soon? Try Norsewood.

Located in the Tararua district of Manawatū-Whanganui, 20km northeast of Dannevirke, this small town is staunchly proud of its Norwegian roots. Streets have Norwegian names and you’ll find a replica Norwegian log cottage, the one and only stavkirke (Stave Church) and “troll caves” at Johanna’s World.

Stretch your legs on the “Troll Stroll” – a pamphlet available in most stores will guide the way – and check out Bindalsfaering, a fishing boat gifted to the town by the Norwegian government on its 100th anniversary. Head down to Matthews Domain between February 6 and 7 and you’ll find a replica Viking town erected for the annual Viking Festival – you might want to buy yourself a horned helmet to blend in.

Try your hand at archery or axe throwing and watch a blacksmith and other skilled in Viking-era arts and crafts make traditional pieces from the likes of iron, wool and leather. You can also expect Viking-inspired food and a battle. Adults pay $5 to enter but kids “under the height of the sword” get in for free.

There are two campgrounds if you want to make a cheap weekend of it – one costing $10 a night and the other free for self-contained vehicles. Other attractions include the Wop Wop Wetlands, a conservation area where you can feed native longfin eels with suitable food from the New Zealand Natural Clothing store, and sampling handmade organic cheeses at Rangiuru Farm, New Zealand’s smallest dairy factory. The award-winning cheesemakers hold workshops for those keen to have a go themselves.

It may often be overlooked in favour of its cuter, wine-focused cousins Greytown and Martinborough, but this Wairarapa wonder is likely to leave you feeling much more rejuvenated (or at least clear headed) after a weekend break.

The gateway to the ruggedly good-looking Palliser Bay with its landmark lighthouse, fur seals and movie star Putangiura Pinnacles, it’s a great base for the outdoorsy. Particularly cyclists.

The Remutaka Cycle Trail, one of New Zealand’s Great Rides, is just up the road. The Wairarapa section of the 115km ride takes in the fields of fluffy sheep, vineyards and uncrowded beaches the region is renowned for with easy detours to wineries and cute towns. The Remutaka Rail Trail, which traces an abandoned railway line built in 1878, is also on your doorstep. Walk, run or mountain bike its 18km, perhaps stopping for a swim or spot of fishing en route.

If you’re a cheese addict (reputable studies have shown it actually can be addictive), stop in at C’est Cheese, an artisan deli that attracts fromage fans from far and wide. Make up a picnic from local favourites such as Drunken Nanny from Martinborough, salami, chutney and other platter items and take them down to Lake Wairarapa, an 80-sq-km “sea of glistening waters” as its name translates.

If you’re a fan of music, art and pretty flowers, there’s extra reason to visit this month. Organised by artist Zelda Bruce, the Wild Flower Festival combines all three, with workshops on everything from self-portrait, sculpture and mosaic to flower therapy and how to de-stress creatively thrown into the mix. Plus a Full Moon Cacao Ceremony.

Most visitors to Banks Peninsula make a beeline for Akaroa, leaving this tiny settlement on the opposite side blissfully uncrowded.

Set on the sunny side of Lyttleton Harbour about 30 minutes drive from Christchurch, its big draws are its pretty, pancake-flat bay, golf course, yacht club and Orton Bradley Park. The latter is a privately owned 650 hectare expanse of native and exotic trees, wide open spaces and walks that range from a 20-minute stroll through rhododendrons to the two-and-a-half hour Waterfall Gully Track.

You’ll also find a café, mountain bike tracks, a streamside children’s playground, and Canterbury’s oldest stone building, the aptly if not imaginatively named Old Stone Cottage. Visit on February 20 and you can also listen to local artists including The Butlers, Kimono and Delaney Davidson play across two stages. The Banks Peninsula Festival will also feature cooking demonstrations in a sprawling teepee and a “mystery box cook off” – basically a live, local version of Masterchef.

There will be multiple food trucks on hand to keep you well-fed and hydrated, including The Vagabond Chefs, Sherpa Kai, Greystone Wines, Cassels Brewing Co, Peninsula Gin, Mauriora Kombucha and Berry Healthy Icecream.

In the words of festival organisers, the event “celebrates the spaces, art and culture we all hold so dearly but can all too easily overlook among the hustle and bustle of daily life”.

Visit on any other day though, and the spot is serenity itself.

If peach-coloured beaches and standout snorkelling, diving and fishing aren’t enough to keep you entertained, visit Whitianga on February 7 and you’ll also get live music, acrobatics, circus tricks and a Vegas-style Show.

Held in five locations in the town centre, the free Whiti Fest Summer Busking Festival features musicians in genres as diverse as soul, blues and reggae to jazz and rock ‘n roll. With a little spoken word poetry thrown in for good measure.

If you can’t make it this weekend, there are still plenty of good reasons to visit the Coromandel town while it’s still in its full summer glory.

Just two-and-a-half hours from Hamilton, past a string of the Coromandel’s best-loved beaches, the historic harbour town is a great base for exploring the region’s internationally renowned east coast.

Lay out your towel on Buffalo Beach for a lazy day of lying horizontal, or follow the sometimes scary but spectacular unsealed road to uncrowded Ōtama and Opito. A five-minute ferry ride will whisk you to the oldest stone wharf in Australasia, from which you can walk to Whitianga Rock Scenic and Historical Reserve, or hire a bike or scooter to traverse the mercifully flat terrain to Cooks Beach, Hahei, Cathedral Cove and Hot Water Beach. Stopping off for a glass of vino and “Coromandel Board” with mussels, smoked fish pate, venison salami and cheese and olives is a must.

As pretty as Te Whanganui-A-Hei Marine Reserve looks from a prone position on a beach towel, it doesn’t beat exploring it by boat or kayak – and a dizzying number of operators will be more than happy to help you out. Dolphins, orcas, penguins, fur seals and stingrays might put in an appearance, but the craggy volcanic coastline is a star in itself.

Wind down with a soak in the geothermal waters of the Lost Spring: after a few sips of your tropical cocktail it’s not hard to convince yourself you’re in Fiji.

Just think of it as a subtropical Pacific non-island getaway.

Its landmark big fruit sculpture may be a bit naff but that doesn’t detract from the quality of the fresh produce grown in these parts, particularly the summer stone fruit. Stuffing yourself with apricots, nectarines, peaches and cherries from roadside stalls is a must when in Cromwell – as is sampling its famously good pinot noir.

The heart of the Central Otago wine region, Cromwell and nearby Bannockburn are home to more award-winning vineyards than you could – or probably should – visit in one weekend, some of the more well known including Carrick, Mt Difficulty, Scott Base Vineyard and River Rock Estate.

Don’t spend all your time in the lakeside town at a table or tasting room though. Old Cromwell Town’s Wild West appearance harks back to its Gold Rush Days – it’s easy to while away a day browsing its beautifully restored and recreated heritage buildings, many of which house artisan stores and quality cafés and sunning yourself on the lawn by the lake.

Old gold mining sites in the area include Bannockburn and Bendigo, where you can explore the ruins of old miner’s cottages. Continue with the retro holiday theme by taking a cruise across the lake in a restored 1929 motor launch.

If you need something more high-octane, head to Highlands Motorsport Park, where you can get behind the wheel of a go-kart, V8 muscle car, Radical SR3 or Subaru WRX, or chauffered laps in a “Highlands Taxi” with a Porsche Cayenne Turbo Engine, reaching speeds of up to 180kmh.

So why visit in February? Wining and dining al fresco in Cromwell is at its best when the sun shines (you definitely don’t want an outside table when the winter fog rolls in and the place turns to pea soup. This Friday and Saturday, the Five Stags Restaurant and Bar is hosting a summer festival from 2pm til “late”. Expect live music, including late-night DJ sets, family-friendly entertainment, giveaways and some excellent food and booze.

Where will you be heading before summer ends? Let us know in the comments.

Home Videos The WORLD of WINE – Wine News. Cheap wine, tasting notes and cooking with wine The World of Wine – May 2021 … END_OF_DOCUMENT_TOKEN_TO_BE_REPLACED

How to visit Napa Valley on a Budget. In this video Carson and I explain a few ways to enjoy Napa on the cheap. Tip and advice about how to visit Napa … END_OF_DOCUMENT_TOKEN_TO_BE_REPLACED

Home Videos Get To Know Argentina Wine | Wine Folly If you love Malbec, Argentina is your ultimate wine region. But that’s not … END_OF_DOCUMENT_TOKEN_TO_BE_REPLACED