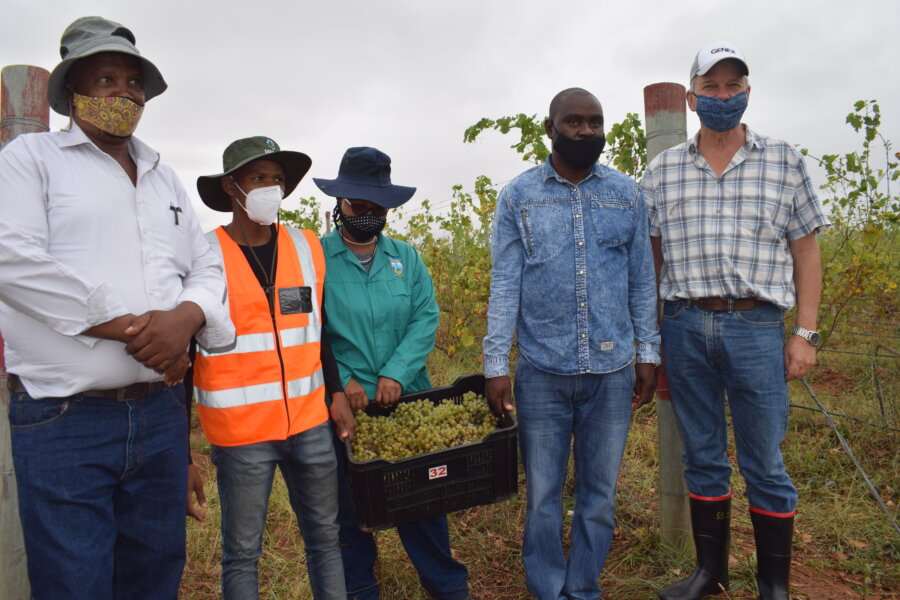 The quality of grapes harvested at Shiloh Irrigation Scheme vineyards in Whittlesea was compromised by the drought over the past year.

This was due to water shortages at Klipplaat and Waterdown dams, which supply the scheme. Oxkraal

Dam, as an alternative source, also had its share of problems due to with cable glitches.

In spite of this, the grapes endured the climate changes sufficiently to produce Inkosi Wine, which is still in its early stages in the wine industry.

The vineyard was planted in 2012 and the first harvest was in 2016. The Chris Hani Development Agency (CHDA) contributed R350, 000 toward the harvest, to cover the

logistics cost of having the produce distributed for processing to Ladysmith in Stellenbosch, in the Western

This also presented a two day job opportunity for 100 community members, compared with 150 last year. The Irrigation Scheme is run by Mayime Cooporative, which has 395 beneficiaries and 14 permanent employees.

”We cultivated 12ha of land. We want to extend to 100ha as our business grows. We produce

”Our wine range includes pinotage, sauvignon blanc, chardonnay and colombard. ”Our latest addition is sweet rosé and we will introduce winterberg soon,” he said.

Adding that their wine business had not yet took off, which meant it was still dependent on CHDA for support.

” Our wine is still new. It is only available in two outlets in  Komani, Pick n Pay at the Mall and The Black Swaan. We are in negotiations with Spar. ”Our biggest challenge is that we do not have our own wine cellar to make the wine and process it here. ”We have to hire a truck for R40, 000 to deliver the grapes to the Western Cape.”

Cecane added that 7ha of grapes went to waste after ripening in January, before the rest of the vineyard was ready. ”This is because we could only afford one truckload.”

He commended Shiloh as one of the stable schemes in the district. ”There are many social challenges in Qamata which undermined development due to infighting.

Shilo has 395 members, but some have only 10 and yet there are fights. ”This is why CHDM and CHDA will continue investing resources to the scheme.”

CHDA CEO Zolile Duze said the programme was started by the CHDM six years ago for Whittlesea’s economic development and as part of revitalising irrigation schemes in the district.

”The municipality assisted with irrigation infrastructure,tractors and machinery. ”Our long-term plan is for the wine to be pressed here for more job opportunities to be created.”

He said events would be targeted to market the wine for the product to gain popularity with locals. Duze said DRDAR would be approached for intervention to install boreholes.

Home Videos The WORLD of WINE – Wine News. Cheap wine, tasting notes and cooking with wine The World of Wine – May 2021 … END_OF_DOCUMENT_TOKEN_TO_BE_REPLACED

How to visit Napa Valley on a Budget. In this video Carson and I explain a few ways to enjoy Napa on the cheap. Tip and advice about how to visit Napa … END_OF_DOCUMENT_TOKEN_TO_BE_REPLACED

Home Videos Get To Know Argentina Wine | Wine Folly If you love Malbec, Argentina is your ultimate wine region. But that’s not … END_OF_DOCUMENT_TOKEN_TO_BE_REPLACED