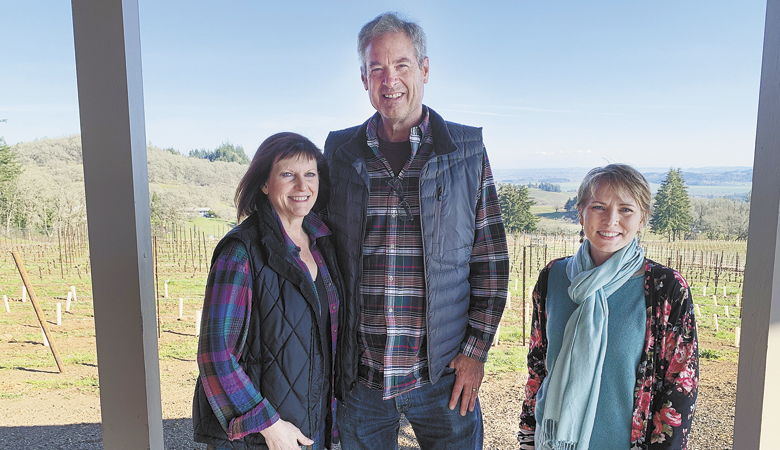 The difficult we do right away; the impossible takes a little longer.” For Jon and Kathy Lauer, owners of Byrn Mawr Vineyards, this adage feels familiar.

The couple’s foray into wine started in 2009, after purchasing 20 acres in the Eola-Amity Hills area, northwest of Salem. It was a steep, challenging site, and the Lauers were new to it all.

Although inexperienced, the two attorneys from San Diego were enthusiastic about their new retirement venture. They turned the existing house into living quarters on the main floor and built a winery/tasting room in the basement. The couple then hired young Rachel Rose, a novice winemaker. A risky decision at the time, but a great one in the end: Rose remains the foundation of the winery’s success.

A frustrated research scientist at the University of California, Santa Cruz, Rose wanted to explore winemaking. She traveled to Australia and studied at the University of Adelaide, earning a master’s in enology and a post-doctorate in viticulture. She gained experience in vineyards there and New Zealand before coming to Oregon to work as a harvest intern at Ponzi Vineyards and Penner-Ash Wine Cellars.

“Rachel joined us right when we bought the property,” Kathy explained. “She lived on site in a restored trailer with her now-husband Liam and put her training on site selection to work as she chose what to plant where.”

One of the first plantings she initiated in the summer of 2010 was two acres of Chardonnay and Pinot Blanc in a sheltered valley that was previously grazing land.

Pinot Noir vines already existed on four of the acres; the oldest two, planted in 1994 to 1997, also contained Chardonnay and Tempranillo. Facing southeast and protected from intense afternoon sun and wind, this block is ideal for growing Pinot.

The other two acres of Pinot, planted in 2000 to 2001, are located on a steep hillside with elevations from 750 to 820 feet. Directly in the path of the Van Duzer winds, flowing east all summer long from the Oregon Coast, these south-facing vines produce smaller berries with tough skins and intense flavor.

The first years were challenging. Production was limited to 500 cases, and the high-elevation, cool, windy vineyards — not to mention rocky — ripen fruit late. As they learned how best to manage, they also faced some of the toughest vintage years in Oregon — Rose admits she often wondered how Bryn Mawr would survive.

With successive plantings and the purchase of an adjoining 20 acres in 2017, they now cultivate 32 acres of vines. Last fall was the final planting. “We’re fully planted now,” Kathy said. The winery also recently received LIVE certification for sustainability.

The Lauers’ youngest son, David, has worked closely with Rose in the cellar since his college graduation in 2016. “This was going to be temporary, a time to figure out what to do next. It’s been a great hands-on learning experience,” he said.

His days were full, working in the cellar in the morning and serving tastings in the afternoon. At one point, he was the hospitality, sales and wine club director, handling all the shipping for 500-plus members. Eventually, they hired Karyn Howard Smith to manage the tasting room. “We were happy to find her. She has the background and passion for it,” David noted.

The shift in responsibility means he’s been able to transfer back to the cellar where he works alongside Rose, whom he describes as “brilliant.” He says he’s seriously thinking about further study in viticulture or winemaking.

Bryn Mawr produces the usual Willamette Valley line-up of sparkling, rosé, Riesling, Chardonnay and Pinot Noir, along with some unusual varieties, most notably Tempranillo. “Tempranillo got us on the map and made us stand out,” said Howard Smith. “It’s challenging to grow and was within minutes of being hacked down.”

One of the winemaker’s favorites remains the Riesling; its first vintage was 2015. “Only in Oregon is it called off-dry,” said Howard Smith. The one-acre site faces west, exposing the grapes to full sun and the full effect of the Van Duzer winds. “It’s a great site for intensity and flavor, balancing the acid and sugar,” she said. “It’s a fun single-acre project.”

After acquiring additional acreage, they built a state-of-the-art winery in 2018 and a tasting room in 2019. With a panoramic view of the Coast Range and Cascades, the elegant space, one of the highest in the Eola-Amity Hills, at 870 feet, offers a spacious deck, covered and heated. “Right now, our tastings are by reservation; we may continue that practice indefinitely,” Jon said. Tastings are available daily, 11 a.m. to 5 p.m.

Not only does Bryn Mawr have a large parking area for 150, they also have a helicopter pad. “We’re on the circuit,” Jon Lauer added.

Home Videos The WORLD of WINE – Wine News. Cheap wine, tasting notes and cooking with wine The World of Wine – May 2021 … END_OF_DOCUMENT_TOKEN_TO_BE_REPLACED

How to visit Napa Valley on a Budget. In this video Carson and I explain a few ways to enjoy Napa on the cheap. Tip and advice about how to visit Napa … END_OF_DOCUMENT_TOKEN_TO_BE_REPLACED

Home Videos Get To Know Argentina Wine | Wine Folly If you love Malbec, Argentina is your ultimate wine region. But that’s not … END_OF_DOCUMENT_TOKEN_TO_BE_REPLACED