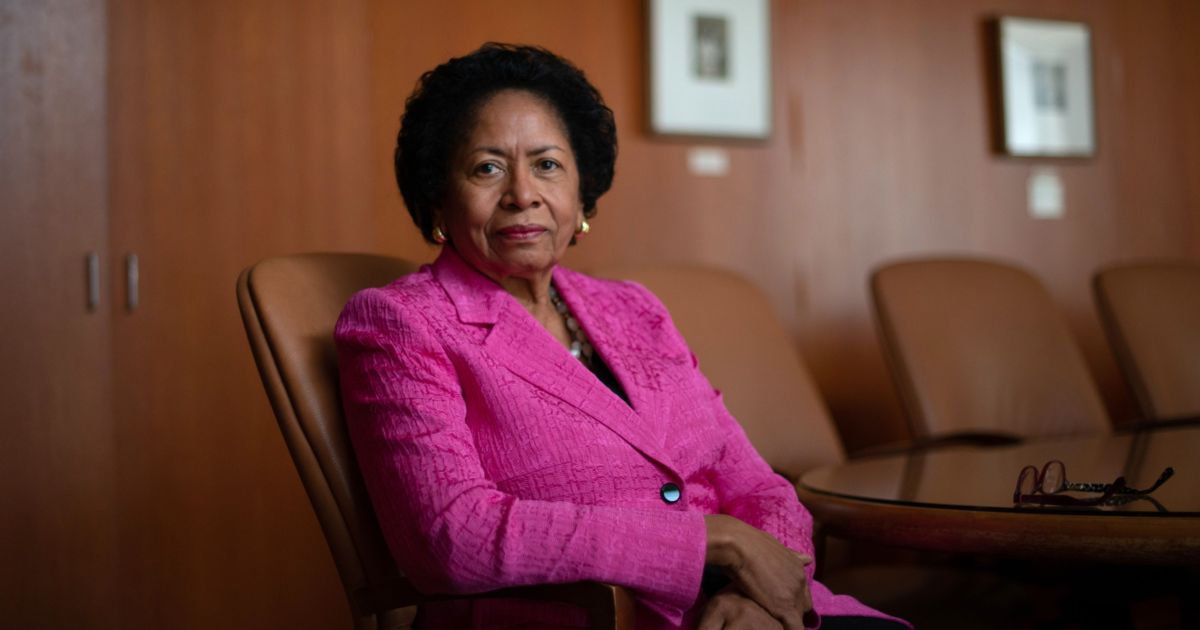 The bills started vanishing, as if a hacker had penetrated a computer in the college’s financial aid office. A $10 lab fee, gone. A $105 student health levy, wiped away. A bill for $1,500 in tuition, forget about it.

Renae Lawrence checked her phone and was astonished. The 22-year-old early education student had been thousands in arrears. Now, the balance had dropped to negative $5.97. Her college owed her money. Lawrence, whose father drove a taxi in Jamaica, started to cry with relief. “I don’t know what I would have done,” she says. “It gave me another chance.”

Lawrence’s historically Black college, Prairie View A&M in Texas, had suddenly come into the kind of money once reserved for Harvard and the other richest schools. Over a month starting in November, students behind on their bills — one out of 10 undergraduates — got this year-end lifeline from economic turmoil in the pandemic. As much as $2,000 apiece, it was the first installment of what will ultimately be $10 million worth of “Panther Success Grants,” named after their school mascot.

It’s part of the unlikely homecoming and valedictory act of Prairie View’s president, Ruth Simmons, one of higher education’s most prominent Black leaders. Simmons is using her clout and connections — and the current U.S. reckoning with systemic racism — to create a renaissance at a school long neglected by its state.

“We don’t want our students to give up,” says Simmons, who will be Harvard’s commencement speaker in May. “We know what’s waiting for them at the other end when they do finish and have a brilliant career. They get to lift their families out of poverty and have incredible lives. We don’t want them to give up too soon.”

The youngest of 12 children in a family of sharecroppers, Simmons grew up in Texas, just a couple of hours north of Prairie View. She then rose to the pinnacle of the academy, as a French literature scholar with a Harvard Ph.D, a dean at Princeton and later president of Brown, the first Black person to lead an Ivy League school. She was a star fundraiser, sought after in corporate board rooms, where she was a director at Chrysler, Texas Instruments Inc. and Goldman Sachs Group Inc.

Now 75, Simmons is bringing all the social capital she built at elite institutions back to her home state. Through her Princeton connections — with an assist from her longtime friend, the late novelist Toni Morrison — she landed an unsolicited $50 million gift from MacKenzie Scott, the former wife of Amazon.com Inc. founder Jeff Bezos and one of the richest women in America. In the aftermath of George Floyd’s death, the nation’s chronically underfunded historically Black colleges are gaining recognition for their role in elevating generations of students. In June, Netflix Inc. co-founder Reed Hastings and his wife gave a total of $120 million to the United Negro College Fund and to Morehouse and Spelman, the renowned pair of Atlanta schools. In February, Calvin Tyler, a retired United Parcel Service Inc. senior executive and board member, pledged $20 million to Morgan State, a historically black college in Baltimore, where he had to drop out because of lack of tuition money.

Even now, the endowments of all 101 historically black colleges total only $3.4 billion, according to the college fund. That’s less than a single Ivy League school — the poorest — Brown.

One of the most astonishing parts of the $50 million gift to Prairie View is this: Even as it brings the school’s endowment to $130 million, the Texas A&M system has $13.6 billion. Though the system has 11 campuses and 17 times the enrollment of Prairie View, its endowment is more than 100 times larger.

This inequality has deep historic roots. In 1876, the Texas constitution established three public universities, what became Texas A&M and the University of Texas for White students, and Prairie View to educate former slaves after the Civil War. All three were supposed to share in the royalties from public land, where oil was discovered in the 1920s.

In 1973, Prairie View became an independently operated part of the the Texas A&M system. Only in the 1980s did the legislature make Prairie View a beneficiary of the state land royalties. Even then, until a federal civil rights settlement two decades ago, the state continued to shortchange the school, allocating less money per student than to historically White institutions. Over the past decade, the Texas A&M system has shifted more of the oil-related earnings to Prairie View, according to spokesman Laylan Copelin.

True to its name, Prairie View, about 30 miles northwest of Houston’s city limits, is situated in a county dotted with cattle, rice and hay farms. The campus of 8,100 undergraduates is known for sending more than its share of engineering and business majors to Pepsico Inc., Dow Chemical Co. and Oracle Corp. It’s also famed for its band, The Marching Storm, whose purple and gold uniforms have been a fixture at events such as George W. Bush’s presidential inauguration and the Super Bowl.

One of Simmons’s brothers, Clarence Stubblefield, was a star point guard on the Prairie View basketball team and went on to be a legendary high school coach in Houston. Simmons herself won a scholarship to another historically black institution, Dillard University in New Orleans.

After retiring from Brown in 2012, Simmons moved back to Houston to be near her now seven living brothers and sisters. With prodding from her Houston relatives, John Sharp, chancellor of the Texas A&M system, wooed a reluctant Simmons to lead Prairie View after its longtime president retired.

“I’m asking you to come to a place where almost none of the kids got it made,” Sharp remembers telling Simmons, in a not-so-subtle dig at her Ivy League career. At first, Simmons agreed only to be the interim chief. The post became permanent in 2017.

Even before the Amazon-related gift, Simmons had already brought a record $17 million to Prairie View in just three years. Donors included Houston-based energy firm Halliburton Co., Dow and Bank of America Corp., whose chief executive officer sits on Brown’s board.

The gift from Scott and her Amazon fortune derived from Princeton connections. In 2017, Simmons and Scott both spoke at a ceremony honoring Toni Morrison, after whom the university named one of its main administrative buildings. Simmons had recruited the future Nobel Laureate to the university; Morrison had been Scott’s teacher and thesis advisor. Scott then began her own career as a novelist.

Simmons kept in touch with Scott and, in 2019, the Prairie View president suggested the philanthropist support the Smithsonian’s National Museum of African American History and Culture. Simmons is on the museum’s board, along with Oprah Winfrey, former first lady Laura Bush and record producer Quincy Jones. Simmons thought it could be a way for Scott to honor their mutual friend, Morrison, who died that year. n October, a Scott staffer called. Simmons hoped it would be an offer to help the Smithsonian. Instead, unbidden, the billionaire was sending $50 million elsewhere — to Prairie View.

About $40 million will flow into the endowment, which is managed by Texas A&M. Simmons will use it to woo professors with new labs and research money, and $3 million will endow a creative writing center—named, naturally, after Morrison.

That still leaves $10 million for the “Panther Success Grants,” the fund to help out with the kind of hardships that can cut short college careers. In part because of financial pressures, about a third of Prairie View students graduate in six years, compared with 82% at the flagship Texas A&M campus.

Chaughn King, 21, works as many as 30 hours a week as a Whole Foods shopper and an Uber driver, while studying for a demanding mechanical engineering degree. “It gets overwhelming at times,” he says. He’d have had to work even more if the Panther Grant hadn’t wiped out the $2,000 he owed for everything from his physics and calculus classes to his recreation center fees.

A classmate, Peyton Jackson, watched her Prairie Value account with alarm because she couldn’t afford to pay the remaining $3,184 balance. The 23-year-old marketing student didn’t have the cash even though she’s working 25 hours a week as a server in a wine tasting shop. She was loathe to ask her mother, a beautician, since her salon had closed in the pandemic.

Then came salvation. A Panther grant slashed the bill to $1,184. It still won’t be easy, but Jackson has renewed confidence. “I can work with this,” she says.

(Updates with writing center endowment in 22nd paragraph. An earlier version of this article corrected the scale in endowment graphic and name of Halliburton in 18th paragraph.)

Home Videos The WORLD of WINE – Wine News. Cheap wine, tasting notes and cooking with wine The World of Wine – May 2021 … END_OF_DOCUMENT_TOKEN_TO_BE_REPLACED

How to visit Napa Valley on a Budget. In this video Carson and I explain a few ways to enjoy Napa on the cheap. Tip and advice about how to visit Napa … END_OF_DOCUMENT_TOKEN_TO_BE_REPLACED

Home Videos Get To Know Argentina Wine | Wine Folly If you love Malbec, Argentina is your ultimate wine region. But that’s not … END_OF_DOCUMENT_TOKEN_TO_BE_REPLACED