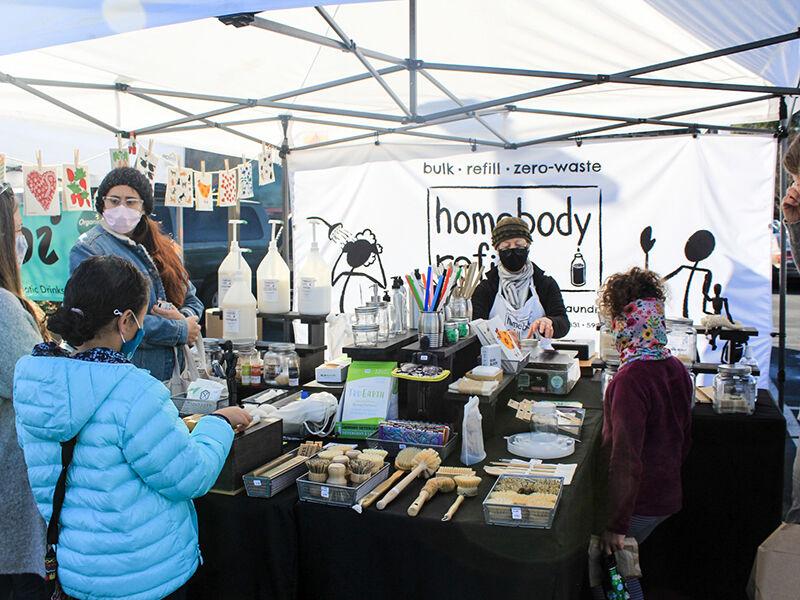 Now that things are opening up again, Townsy Media took  a look around to see what’s new in the local business community.

There are several new businesses just opening up.

Many Sebastopudlians have been waiting for a store like Homebody Refill for a long time. It’s a store dedicated to creating a world without plastic. Owner Joan Ayres had the idea for the store in 2019.

“I was becoming obsessed with the idea that my buying habits were ruining the planet, and I should be doing something about it,” she says on her website. “And so, I pondered what a world without single-use plastic would look like.”

The answers can be found at Homebody Refill: wooden tooth brushes and toothpaste tablets in paper containers, bulk soap and shampoo that customers can pour into glass bottles, environmentally safe dish scrubbers, flexible beeswax bowl covers; you get the idea. According to the website, Homebody Refill, which has been a staple at local farmers markets, will open its door at 144 Weeks Way on the Sebastopol Plaza in June.

The Vitality Center is opening next door to Create It and Screamin’ Mimi’s and plans to carry yoga and massage equipment and supplies, as well as handmade designer fitness clothing. They also plan to do self-care workshops and equipment rentals. Expect a soft opening in April/May and a grand opening in June. The Vitality Center is located at 6914 Sebastopol Ave. and their phone number is 707-827-6006.

Victoria Johnston, the former branch manager of Umpqua Bank, has come out of retirement to open a new Farmer’s Insurance office with her daughter, Crystal Hernandez, on the square in Sebastopol at 138 Weeks Way.  “We love helping people,” Hernandez said, “and we’re both eager to help local families get the protection they need.” You can reach them at 707-292-9703.

Wine Works was started by husband and wife team, Mark and Melissa Ray, who have a passion for high quality, hand-crafted, small production wines. They are located at the north end of town at 870 Gravenstein Hwy. in the building formerly occupied by Occidental Cellars. The Rays purchased the building in May 2020 with the goal of creating a cooperative winemaking facility where a small group of independent Sonoma County winemakers can focus on producing world class Pinot Noir, Chardonnay and other varietals. Right now, however, it’s just the Ray family, though they have two labels: Perception and Melissa Kelly. The couple and their two children live in Napa County, but Melissa says they’ve fallen in love west county and hope to move here eventually. Mark, the winemaker, was an assistant winemaker at William Selyem, Turley Wine Cellars and Neyers Vineyard, and he has always admired Sonoma County fruit. He’s been making wine under the Perception label, using Russian River Valley grapes, since 2007. Melissa brings her many years’ experience working in corporate wine sales and marketing to her handling of the tasting room. Right now, they’re producing Pinot Noir and Chardonnay, and they will soon be adding an old vine zinfandel. In their vertical tasting, you can taste a range of Perception’s delicious Pinots, ranging from 2017 back to 2012. The 2017 Russian River Valley is a stunner — big and luscious — and the older vintages, though obviously less fruit forward, show how beautifully a well-made Pinot can age. Contact them at 707-827-8258 or info@whwineworks.com.

Victorian Farmstead Meats is moving from its longtime perch in Community Market to a larger space in the Barlow — if all goes according to plan, said owner Adam Parks. “We’ve been working in a 120-square-foot production facility for almost eight years now, and we’ve expanded so much since COVID hit that we definitely are ready to have more space,” he said. While many businesses languished under COVID, Victorian Farmstead Meats prospered, expanding their sales and online subscription business throughout the Bay Area. “I think what happened was people got really nervous about where their protein was coming from, and so they sought out small local places, and once they found us, they found out that it wasn’t as expensive as they thought, the quality was so much better, and they were so happy with the convenience of it. We have about an 80% retention on our subscription business,” he said. Parks says the business will be moving into a 1,500-square-foot space in the warehouse across the street from Kosho. “It’s going to be a very traditional, old school butcher shop with some modern twists,” he says, noting that they’ll be doing butchery demonstrations, grilled, smoked and roasted meats, as well as producing their own spice rubs and marinades.

Many businesses did not make it through this last crushing year. This spring we lost two local favorites: Food Mechanic and Giovanni’s Deli. Food Mechanic, a concept café serving soup, salads, collagen jigglers and chocolate chip cookies served in a spare and elegant storefront, bowed to financial reality and closed March 26. Giovanni’s Deli on Pleasant Hill Road, which had been in business for almost 50 years, closed in the middle of April.

Sonoma West Publishers is partnering with Townsy to make our news more accessible to the Sebastopol community.

Home Videos The WORLD of WINE – Wine News. Cheap wine, tasting notes and cooking with wine The World of Wine – May 2021 … END_OF_DOCUMENT_TOKEN_TO_BE_REPLACED

How to visit Napa Valley on a Budget. In this video Carson and I explain a few ways to enjoy Napa on the cheap. Tip and advice about how to visit Napa … END_OF_DOCUMENT_TOKEN_TO_BE_REPLACED

Home Videos Get To Know Argentina Wine | Wine Folly If you love Malbec, Argentina is your ultimate wine region. But that’s not … END_OF_DOCUMENT_TOKEN_TO_BE_REPLACED