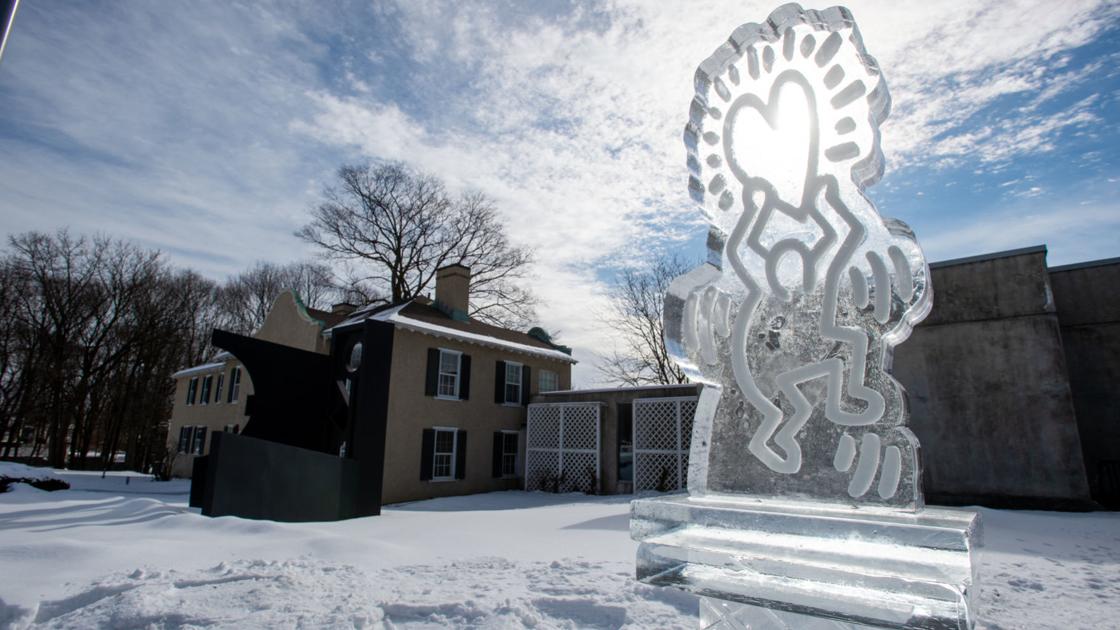 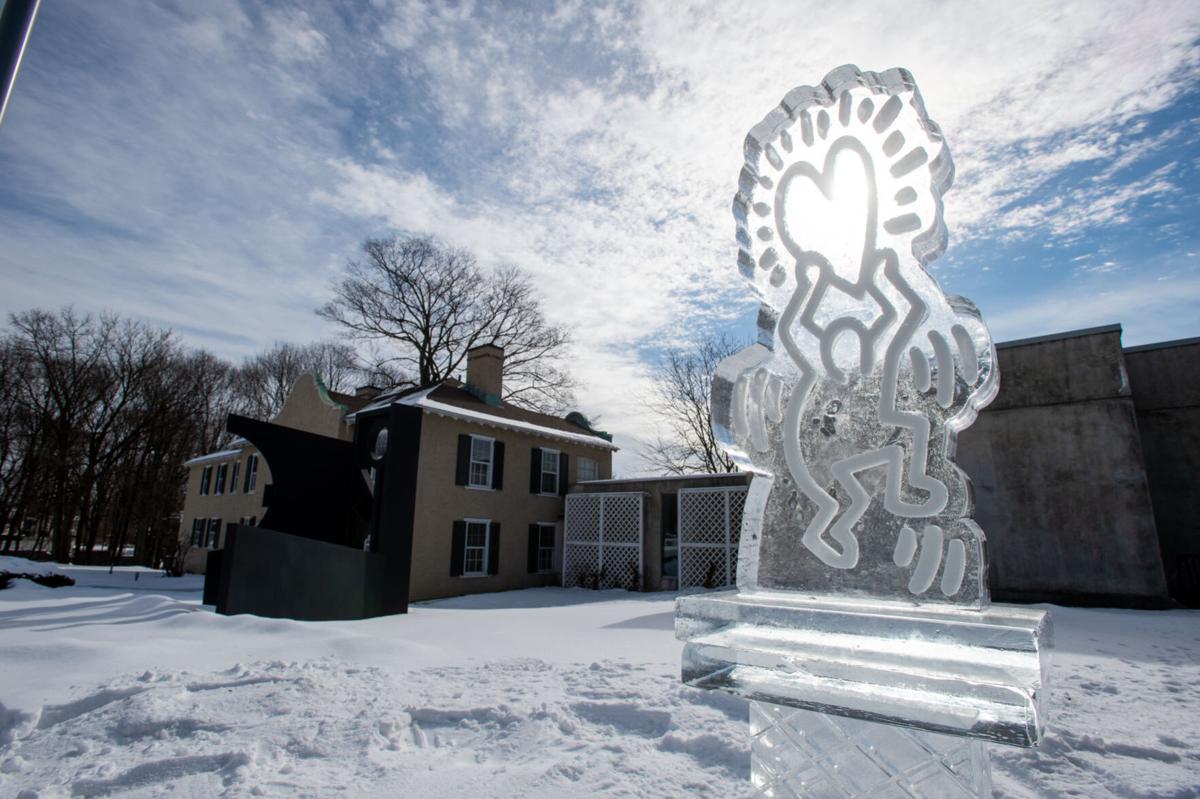 Sunlight shines through the heart of a new ice sculpture unveiled at The Hyde Collection art museum in Glens Falls on Friday. The sculptures, chiseled by Charles Jones, were created under the theme “A Winter of Hope” and honor front-line workers’ service during the pandemic. 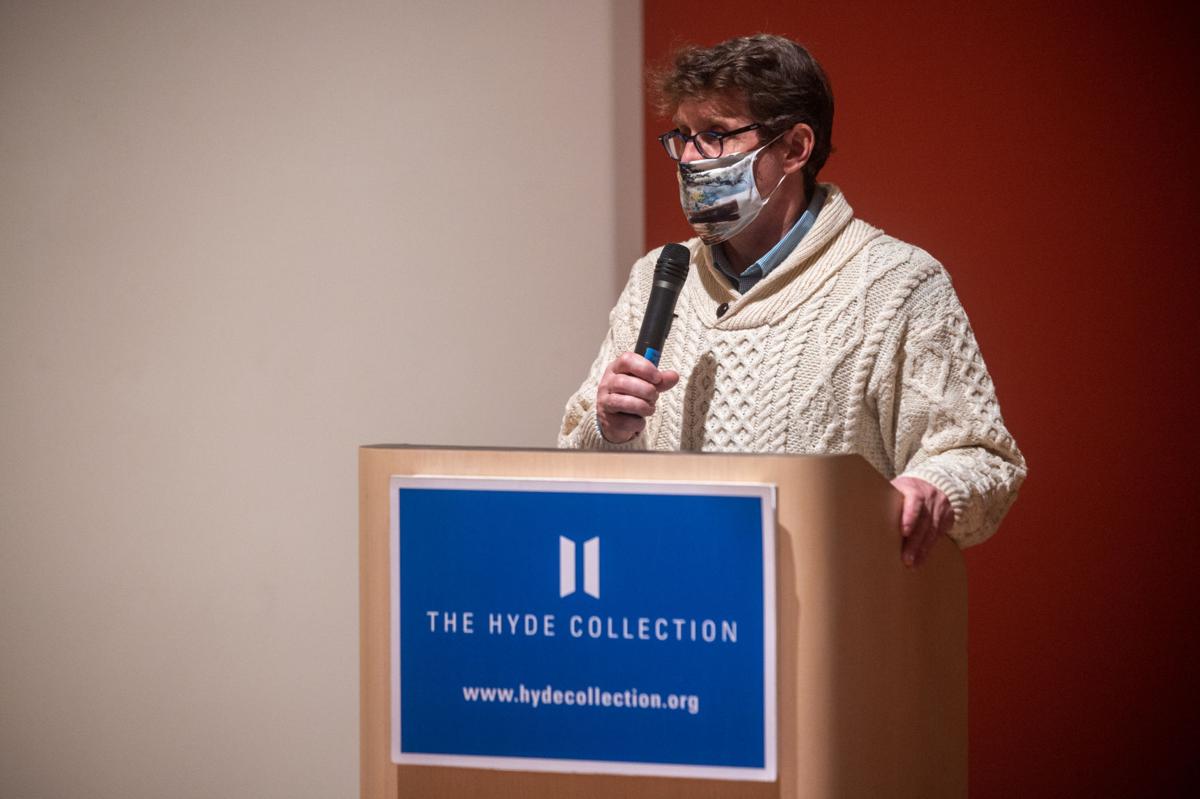 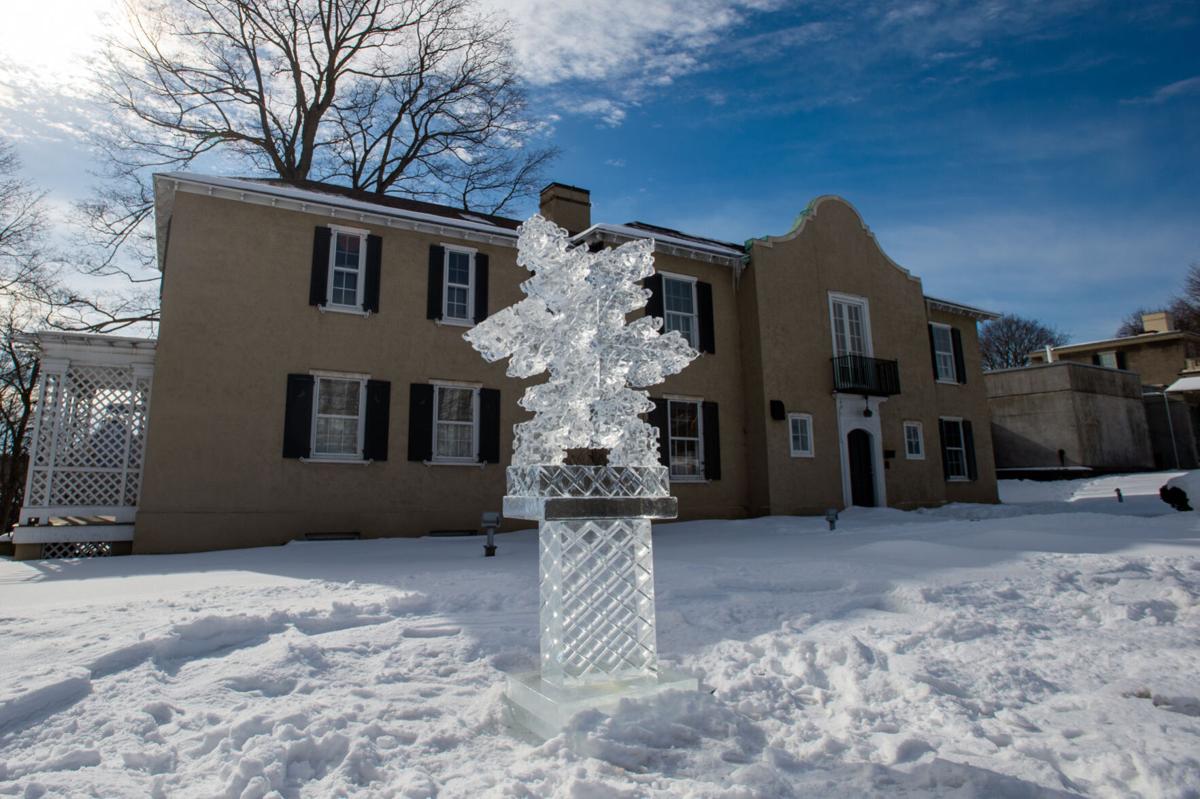 The Hyde Collection in Glens Falls on Friday unveiled a series of three ice sculptures on its front lawn as part of its “A Winter of Hope” exhibit. The exhibit pays tribute to local front-line workers. Seen here: One of three sculptures carved by Charles Jones, a Hudson Falls-based ice sculptor, currently on display.

GLENS FALLS — The Hyde Collection on Friday unveiled a series of ice sculptures honoring local front-line workers, marking the first time such a display has ever been featured at the museum.

The three statues, which are situated on the museum’s front lawn as part of its “A Winter of Hope” exhibit, were carved by Charles Jones, a Hudson Falls-based ice sculptor known as “The Ice Man.” The exhibit is set to run through Feb. 26.

Jonathan Canning, the museum’s curator, said the sculptures were based on the work of Keith Haring, who brought attention to the AIDS epidemic in the 1980s. Haring, who died in 1990, also has work displayed inside the museum.

“We’re delighted and honored to dedicate this installation to all of our front-line workers,” Canning said. “We recognize that we’re incredibly lucky in our little city to have a dedicated force of first responders, police, fireman and hospital workers who are ready and willing to aid us at our most critical moments.”

The museum’s entrance is flanked by two sculptures depicting a person holding up a heart. A large snowflake carving is also on display, and three more sculptures are expected to be unveiled on Thursday, weather permitting.

Each sculpture will be illuminated at night.

The Hyde was closed for much of last year due to the pandemic. The museum opened on a limited basis for a brief period beginning in the summer, but closed again in late December after the number of confirmed coronavirus cases began to rise.

The museum is expected to open its doors again of May 1, with a new exhibit, “The Very Best of the Hyde,” which will feature displays from a number of past exhibits that haven’t been available to the public for viewing in years, said John Lefner, the museum’s chief development officer.

“Our guests are going to have an opportunity to view works of art that haven’t been on display in a very long time,” he said.

During the closure, the museum has shifted some of its displays online using high-resolution photographs, and has worked to increase its online presence, hosting a number of educational events in order to keep would-be guests and members engaged.

A wine tasting is scheduled for March 4, which will include a discussion about the history of California wines and a review of wine-influenced works of art with Canning.

Inside the museum, the walls of the Wood Gallery were bare as staff prepare for its eventual reopening.

Canning said it’s the first time since he’s been a curator that art has been moved outside, but added he was excited to be able to showcase such an important exhibit during difficult times.

“In my career, this is the first time that I have cleared the gallery and put the art on the outside … but it’s a topsy-turvy world with this pandemic,” he said.

Chad Arnold is a reporter for The Post-Star covering the city of Glens Falls and the town and village of Lake George and Washington County government. Follow him on Twitter @ChadGArnold.

Home Videos The WORLD of WINE – Wine News. Cheap wine, tasting notes and cooking with wine The World of Wine – May 2021 … END_OF_DOCUMENT_TOKEN_TO_BE_REPLACED

How to visit Napa Valley on a Budget. In this video Carson and I explain a few ways to enjoy Napa on the cheap. Tip and advice about how to visit Napa … END_OF_DOCUMENT_TOKEN_TO_BE_REPLACED

Home Videos Get To Know Argentina Wine | Wine Folly If you love Malbec, Argentina is your ultimate wine region. But that’s not … END_OF_DOCUMENT_TOKEN_TO_BE_REPLACED