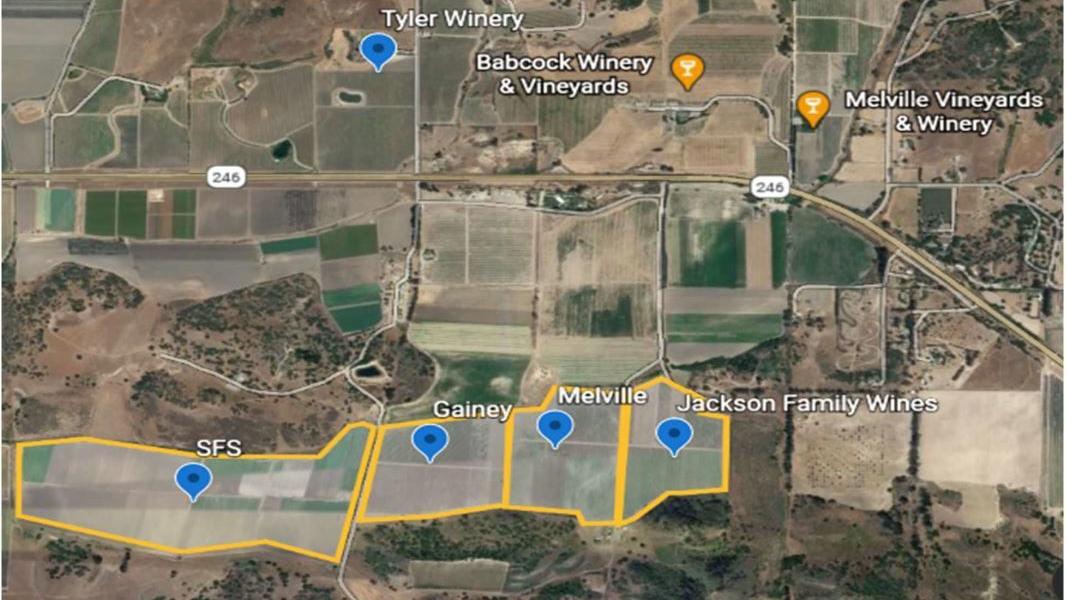 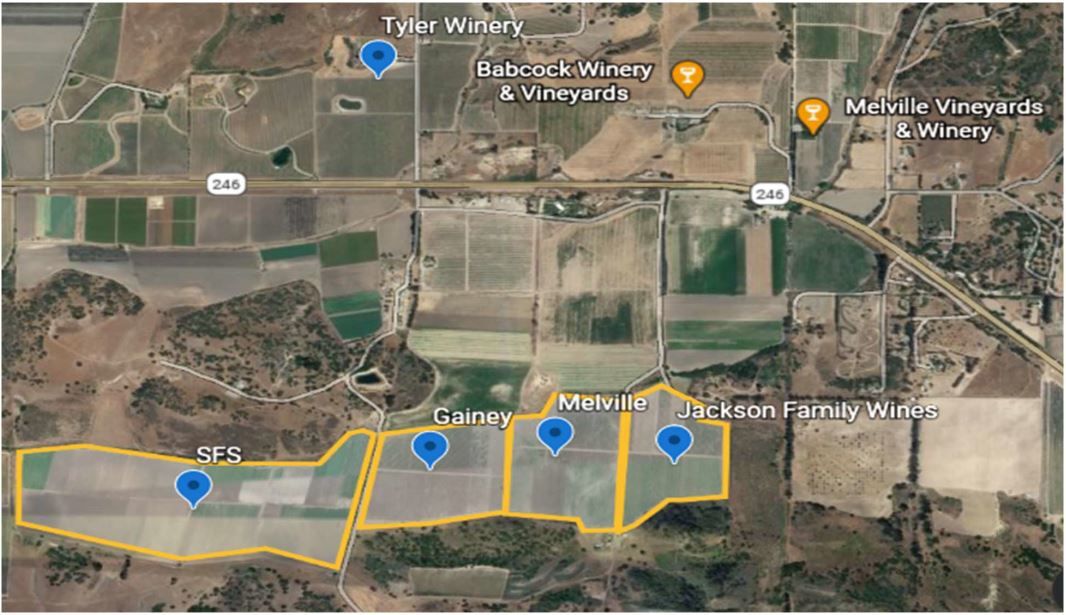 An aerial image of the Santa Rita Valley included in a presentation about the Melville appeal of SFS Farms cannabis cultivation operation, at left, shows its proximity to three vineyards and three wineries, two of which have tasting rooms. 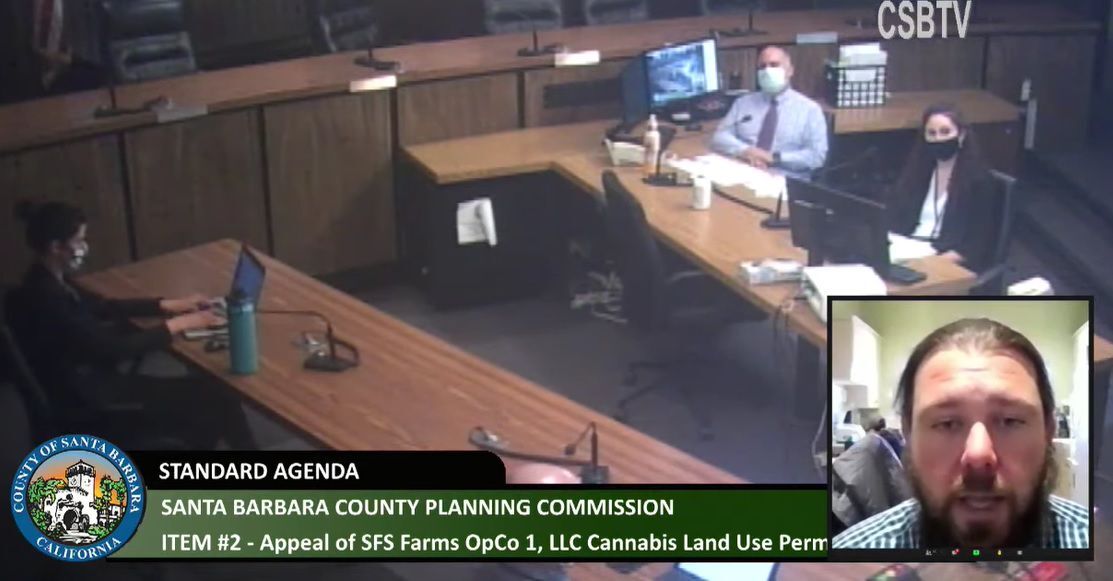 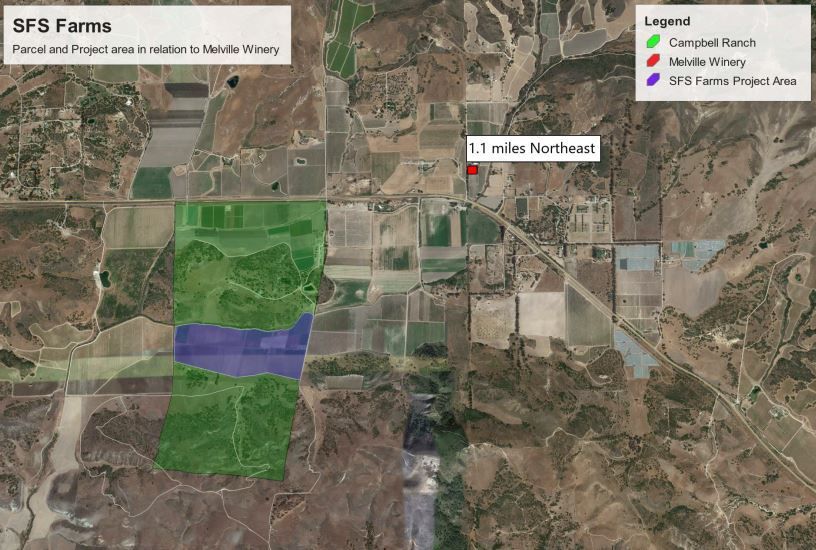 An aerial image of the Santa Rita Valley in an SFS Farms presentation responding to an  appeal of its land use permit shows the location of its cannabis cultivation operation, in purple on the Campbell property, in green, in relation to Melville Winery’s tasting room, in red. SFS said the distance from the cannabis to the tasting room is 1.1 miles; Melville Winery said it’s 3,000 meters. 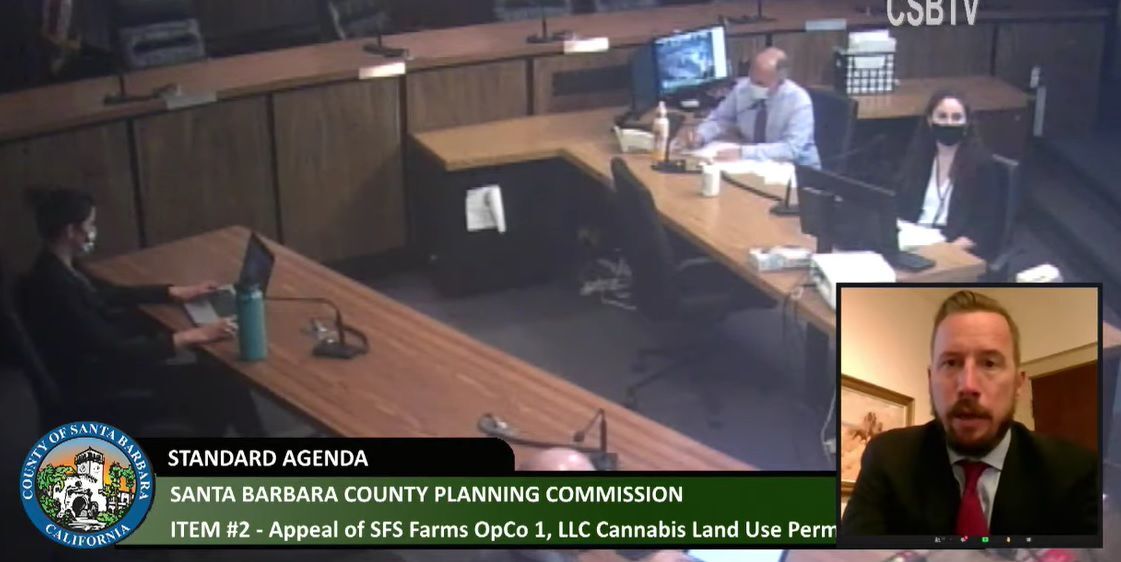 Larry Conlan, inset, representing SFS Farms, discusses its cannabis cultivation project during a Santa Barbara County Planning Commission hearing on an appeal of its land use permit in this image from CSBTV’s livestream of the meeting.

An appeal of an 86.8-acre cannabis cultivation project near Lompoc was rejected Wednesday by the Santa Barbara County Planning Commission, whose members said that decision likely will be appealed to the Board of Supervisors anyway.

After more than five hours of presentations, discussion and public comment, commissioners voted 4-1 to deny the appeal of a land use permit granted to SFS Farms OpCo 1 to cultivate cannabis on a 959.59-acre site off Highway 246 in the Santa Rita Valley about 4 miles east of Lompoc.

Third District Commissioner John Parke cast the dissenting vote on the motion to deny the appeal filed by Chad and Ron Melville, owners of Melville Winery, joined by Dan Gainey of Gainey Vineyard and four others.

Parke said the project complied with county ordinances, but he wanted to cut the project size to 42 acres on the west side of the site and require a limited adaptive management plan to deal with complaints about the operation.

“I think we have to approve this project in some part, but I want it to be reduced to 42 acres [on the west side],” Parke said, which would provide a 1,500-foot buffer between the cannabis and the Gainey wine grapes adjacent to the east side of the property.

But like other commissioners, Parke was critical of the Board of Supervisors for going against the commission’s previous ordinance recommendations and for approving a program environmental impact report that didn’t account for a variety of conditions affecting individual projects.

So in a separate unanimous vote, commissioners directed the staff to secure a request for proposals from the Board of Supervisors for the county to fund an independent study of the impact of terpenes — volatile hydrocarbons — emitted by cannabis on grapes and the wine made from them.

The staff and other commissioners cautioned against making a hasty decision on that direction.

But 5th District Commissioner Dan Blough, who made the motion, wanted no delay, because the issues of terpene effects as well as cannabis odor on the wine industry has cropped up in nearly every appeal of cannabis cultivation projects.

“We’re dealing with this every damn meeting,” he said. “This is something we’ve been talking about for two years. Let’s get it done.”

Odor, terpene impacts, the project size and its proximity to three downwind vineyards were among the prime objections in the Melville appeal of SFS Farms land use permit that was approved by the planning director in September 2020.

He said the location is at the mouth of a wind funnel aimed at those vineyards and pointed out the 86.8 acres is equivalent in size to more than 65 football fields.

“You’re talking about a massive, massive size difference than anything that [the commission] has reviewed before,” Ammann said.

He said the inconclusive terpene studies cited in a staff report recommending denial of the appeal were flawed and not conducted by independent organizations.

SFS attorney Larry Conlan disagreed with some of Ammann’s assertions and cited peer-reviewed academic studies of terpene impact on wine grapes conducted by the University of Adelaide and Australian Wine Institute and published in the Journal of Agricultural and Food Chemistry and others.

“The problem is, much of what we hear is determined by misinformation and some [of it is] deliberate,” Conlan said. “There is no evidentiary support for this argument [that] comes mainly from wine growers.”

He also said the varieties that will be grown by SFS are for oil production and have aromas of berries, apples, citrus and “dessert,” not skunk like those grown for smoking.

Commissioners also heard about an hour and a half of public comments, most of it opposed to the project but some objecting to cannabis cultivation in general, calling for changes in the county regulations.

Marc Chytilo, representing the Coalition for Responsible Cannabis, said people in the cannabis industry told him the project is of unmanageable size, and he claimed it would not only be the largest cultivation operation in the county but one of the largest in the nation.

Keith Sarles argued that SFS could choose another location but wineries could not, saying terroir — the sense of place — is vital to the county’s $2 billion wine industry.

“We are not making a booze,” Sarles said. “We are actually making wines that are an expression of a piece of property. If you move down the road, the wines will be different.”

Commissioners who voted to deny the appeal also didn’t like the size of the cultivation area, its proximity to vineyards and the concentration of cannabis in the Santa Rita Valley but said they felt constrained by county ordinances.

“My heart goes with the opponents,” 1st District Commissioner Michael Cooney said. “My head goes with the applicant. We have [a land use permit] approved by our director according to the ordinance. … I’m going to hold my nose and vote in favor of the applicant and against the appeal.”

Stay up-to-date on the latest in local and national government and political topics with our newsletter.

Home Videos The WORLD of WINE – Wine News. Cheap wine, tasting notes and cooking with wine The World of Wine – May 2021 … END_OF_DOCUMENT_TOKEN_TO_BE_REPLACED

How to visit Napa Valley on a Budget. In this video Carson and I explain a few ways to enjoy Napa on the cheap. Tip and advice about how to visit Napa … END_OF_DOCUMENT_TOKEN_TO_BE_REPLACED

Home Videos Get To Know Argentina Wine | Wine Folly If you love Malbec, Argentina is your ultimate wine region. But that’s not … END_OF_DOCUMENT_TOKEN_TO_BE_REPLACED