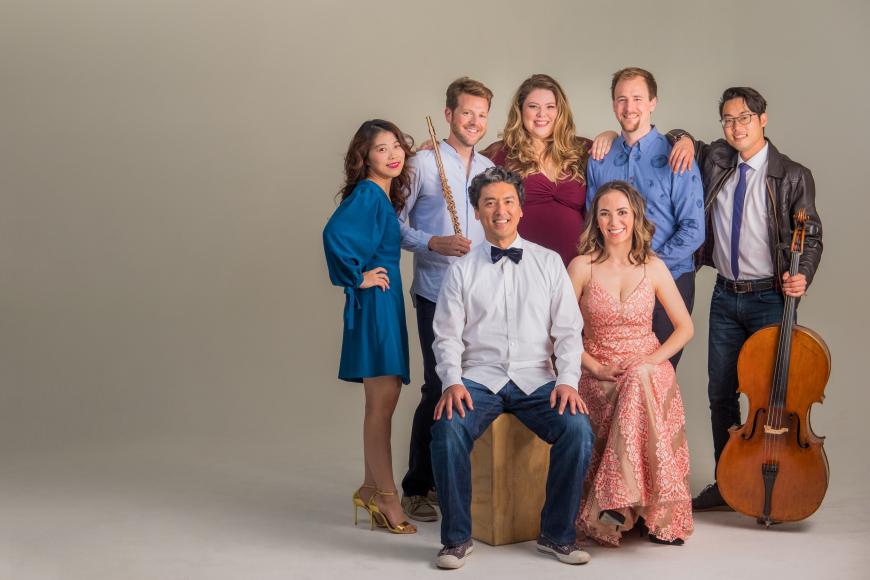 Founded in 2010 by violinists Maia Jasper White and Kevin Kumar, Salastina might be one of Los Angeles’ best kept musical secrets. With six resident artists who are, according to its website, “by day, world-class performers and studio musicians and by night, they’re on a mission to broaden the definition of what classical music was, is, and can be.”

Having met in Santa Barbara while playing in an orchestra, Jasper White, who graduated from Yale and earned a master’s degree from USC and Kumar, a Stanford alumnus, talked about their artistic impulses. “We weren’t really fulfilled by the types of concerts we were participating in,” recalled Kumar, “and wanted to change the full context of what a concert is like for us as performers and for the audience, as well.”

To that end and with an eye towards modernizing the culture around classical music, Salastina, whose homes are Barrett Hall at the Pasadena Conservatory and the Edye Second Space at the Broad Stage in Santa Monica, would perform seven pairs of concerts a year. Until COVID-19 hit, that is. And with arts organizations all over the world having to change their modus operandi, Salastina has not only transformed its delivery system, it appears to be thriving.

Every Tuesday via Zoom, the organization has been presenting what it calls Virtual Happy Hour, offering live musical performances, conversations, and interaction with music lovers all over the world. Indeed, having jumpstarted these weekly concerts last April, Salastina has counted among its participants such bold-faced names as violinist Hilary Hahn, librettist Vid Guerrerio and film composer Alan Menken, with upcoming events including, Happy Hour No. 51, an “Anniversary Year in Review” (April 6) and composer Elliot Goldenthal (April 27).

Jasper White, who is also director of chamber music at Cal Tech, said the response has been tremendous. “Our audience has grown by over 1,000 percent. We keep track, and most are local to the U.S. and Southern California specifically. One third are from L.A., and we’re converting them into ticket buyers. They also align well with our mission, making classical music more relevant to a forward-looking society. With Hilary Hahn we had 1,000 viewers and one of my favorite pull quotes from the chat box was when the listener wrote that she feels like she’s “been let in on a secret society!” We don’t charge for our Happy Hours, but artists don’t donate their time. Because we are pretty consistent in our donations, it results in a net profit. It’s modest, but it pays for itself, like a public radio station or a church model.”

Jasper White added that when the salons first began, nobody knew how long the lockdown would be, but “when it became clear that things were going to be shut down for a while and the moon is five feet from the earth now, why don’t we get artists we would like to have? We have open minds and open calendars to grow our audience and were making artistic connections [such as mandolinist/singer/composer] Chris Thile, [violinist/singer/composer] Caroline Shaw, and [percussionist] Evelyn Glennie. Once we started getting a certain level of artist it became easier.”

And since May of 2020, Salastina’s pandemic programming has also included Project: Music Heals Us, where musicians perform private, virtual bedside concerts for patients, their families, and medical staff in UCLA’s ICU.

As with other arts organizations planning milestone years pre-COVID, Salastina was slated to have an impressive 10th-anniversary season. Jasper White believed that the group had hit its stride, having presented concerts of varying themes, with offerings like “Sounds Genius,” a deep dive into a masterwork, “Sounds Mysterious,” the musical equivalent of a blind wine-tasting and “Sounds Delicious,” which paired gourmet meals with live musical selections in an intimate setting.

Hoping to return to those types of performances, Salastina’s co-directors are nevertheless planning to continue their Happy Hours. “The key word,” noted Jasper White, “is integration, and by that, I mean integrating the digital programming with real live programming. You have guests on Happy Hour who relate in some way to what is being performed live that month. And if you’re not able to go to a live concert, you’ll find it interesting, but if you are, it fleshes out the music even more.”

Home Videos The WORLD of WINE – Wine News. Cheap wine, tasting notes and cooking with wine The World of Wine – May 2021 … END_OF_DOCUMENT_TOKEN_TO_BE_REPLACED

How to visit Napa Valley on a Budget. In this video Carson and I explain a few ways to enjoy Napa on the cheap. Tip and advice about how to visit Napa … END_OF_DOCUMENT_TOKEN_TO_BE_REPLACED

Home Videos Get To Know Argentina Wine | Wine Folly If you love Malbec, Argentina is your ultimate wine region. But that’s not … END_OF_DOCUMENT_TOKEN_TO_BE_REPLACED