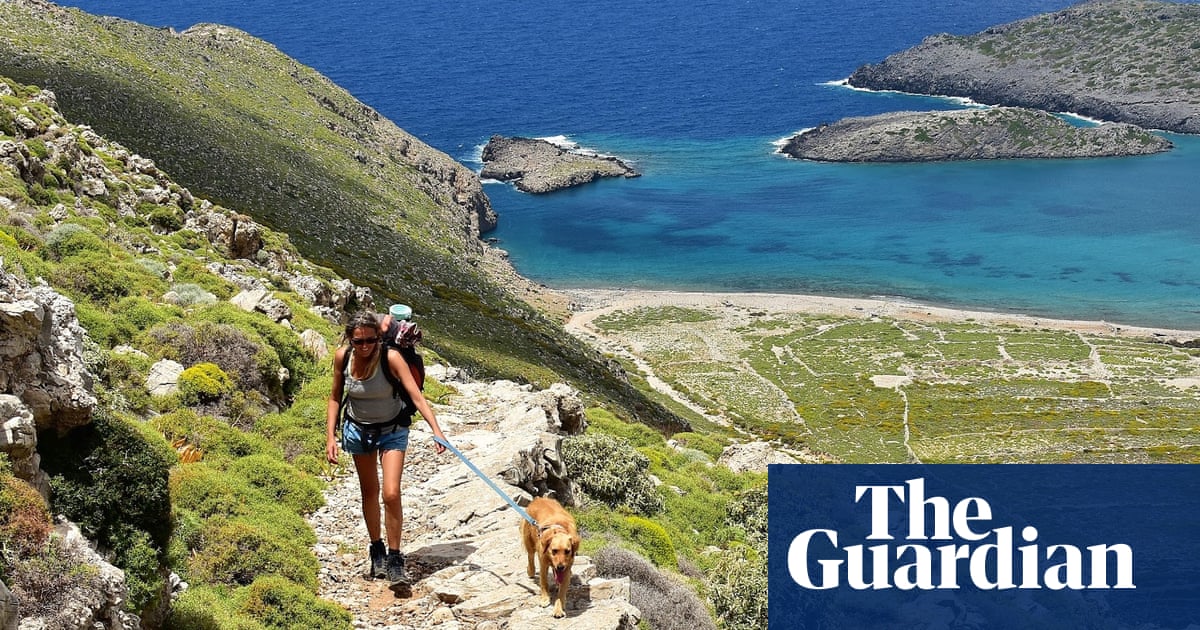 The trail winds downhill following an oleander-filled valley towards sapphire sea. If I stop walking, the only sounds are bees and birds. I spot a cormorant on a rock, craning its neck. Crystalline water glints invitingly and I swim with a mask to watch the fish. Drying off on the pink sand, I wander up to the crumbling old stone sea wall, out of which are tumbling shards of broken pottery in varying patterns from who knows when.

Walking back up the valley later I come across a strange stone-lined pit about five metres deep; later after continuing up a hillside contoured by old terraces, I look down to see the outlines of the abandoned fields. The more you get in the habit of looking, the more layers of history you see lurking in this seemingly empty landscape.

Before I moved to the island of Tilos in the Dodecanese a decade ago, I’d often visit Kos or Rhodes, and escape the package holiday crowds to sneak away to somewhere calmer and wilder. Dodecanese means “Twelve Islands”, though there are closer to 20 inhabited islands in this group dotted around the south-west corner of Turkey (and maybe 100 now uninhabited).

Even in the tourist hotspots though, you don’t need to venture far to explore silent uplands and valleys where partridges fly up from the sage and thyme and birds of prey circle high above. After I started to learn more about the things left behind from the past, I was fascinated. Only 50 years ago, these islands were very different.

In the southern part of Tilos, high in the hills, there’s Mikró Chorió, the island’s former capital. It was abandoned in the mid-20th century and is now uninhabited, as are the simpler settlements Gera, where people stayed in the summer, and Pano Meri, literally “high places”. There are also scattered farms where no one has lived for decades, their straight stone walls and fireplaces still intact.

In the days when people got around by boat and donkey, places that feel remote now were connected by stone paths. Built into overgrown hillsides all over this rugged island are crumbling chapels with medieval frescoes, saints with their eyes gouged out by Ottoman iconoclasts. I walk alert for the holes of deep rainwater cisterns. Everywhere are stone circles once used for threshing wheat, drying fruit, slaughtering animals, perhaps even dancing.

Tilos is 65 square km with fewer than 500 permanent residents, but for centuries even small islands had populations in the thousands, with busy economies exporting anything from figs to sponges. They were by necessity self-sufficient: land cultivated up to the peaks, animals used for food and clothing, villages bustling and noisy.

It was a good life – but a hard one that grew harder as people were repressed by Ottoman then Italian occupiers, and caught in the crossfire of the second world war. When opportunities came to leave for the US and Australia, people grabbed them. Captivated by the traces of a culture that survived here for so long and then was lost, I have spent the past five years travelling from island to island exploring the deserted places.

On neighbouring Nisyros, an island formed by eruptions from the volcano at its centre, the abandoned cave farmhouses, spiladi, have stone arches inside to brace them against the earthquakes that led many to leave, but also bath-shaped structures for making wine and distilling. Along the coast are two grand spa complexes built a century ago for visitors to enjoy the healing geothermal waters, now mostly abandoned. On the other side of the island, a little harbour surrounded by jagged black lava is now an idyllic place to swim.

Once you leave the main village of any island, it often takes a scramble but you find hidden treasures in the hinterlands. Halki, one of the smallest inhabited islands in Greece, feels vast and wild when you leave behind the colourful harbour and head up past the abandoned chorio (village) and on to the rugged mountain dotted with round stone shepherds’ huts called kyfes, and fields on the high plateau. On the small and lesser-known islands, building has been mercifully limited, so the past has not been fenced in or built over but often lies undisturbed on the landscape.

Even the bigger, busier islands are home to strange, abandoned places. On the north-west coast of Rhodes, after you leave behind the hotels and the airport, the land becomes agricultural, the hills covered by mastic bushes and juniper, cistus and thyme. Goats wander; caper bushes and vines spill into the road. Dominated by the highest mountains in the Dodecanese, the centre of the island is covered in dense forest.

Hidden up there is the village of Eleousa, its once-grand buildings eerily empty. It was purpose-built by the Italian occupiers in the 1930s but abandoned once Italy had been invaded by the allies in 1943. A road lined by pine trees leads past a fountain of dazzling green water to a ruined villa – now graffiti-covered, with missing doors and windows – that was intended as a retirement home for Benito Mussolini.

Kos, too, holds surprises. In winter, when the hotels on the coast were closed, I found sheep being grazed around the abandoned salt works on a lake frequented by flamingos. Staying in the village of Pyli , I walked through a string of other villages in various stages of desertion to Haihoutes. You might expect one abandoned village to be much like another, but each owes its distinct style to the surroundings – the particular makeup of the rock, the resources and style and needs of the community. Paleo Pyli had a simple Turkish bathhouse with a domed roof because when it was abandoned 200 years ago, it was part of the Ottoman empire.

People on these islands lived from the land, not only building with stone but making lime in kilns, harnessing natural power through windmills, collecting rainwater in cisterns. Many of these places retained traditions for so long because of their isolation. And although so much has been lost, much remains. In remote, rural places such as the north of Karpathos, I’ve met people making wine and cheese and charcoal and leather boots by traditional methods, with tourism (outside of the Covid pandemic) supporting an almost-lost way of life. Sleepy Arki (or Arkoi) is only 6.7 square km with a population of 40, and yet with hundreds of goats, produces several types of cheese to ship to other islands.

There’s nothing more exciting than taking a ferry to another island with the intention of walking across it to a deserted beach. I love a walk in a thrillingly empty landscape, where the road turns into a track turns into a trail and I am out in the wilds. Having an adventure makes the rewards at the end of the day – a slap-up dinner of local food – even better.

The people of the Dodecanese lived from the land, but they also lived from what they pulled from the sea, and being at an important crossroads in the Mediterranean, many thrived on shipping and shipbuilding. Kasos was one of them, its history of desertion more extreme than some. When its ships joined in the Greek war of independence, the Ottoman empire retaliated by having all the men they could find massacred and the women and children sold into slavery. Wandering through the neighbourhood of Panayia, with its six churches, I find abandoned captains’ houses. Through the front windows looking out to sea I glimpse tall ceilings with herringboned wooden rafters, delicately carved cupboards, and plastered walls with hand-painted decorations in ochre, red and pale blue.

I walk across the island, along another road to nowhere, to another bay deserted except for a couple of fishermen. I swim in the clear water and when I get out, spy eagles crying on the clifftops. I rest on the beach, the sea and sky a deep blue and nothing on the horizon. On the long walk back, soft pink light picks out the old terraces on hillsides now covered in thorny scrub, and goats watch from above.

The dereliction created the islands we know and love today: unspoiled coasts and hills that are conservation areas, rural refuges, islands we can walk across in moonlight, listening to the call of the scops owl. At night, the sky is so dark you can see the Milky Way.

As most of the world rushes to build roads and houses for a growing population, for the past 100 years this cluster of Greek islands at the south-east edge of Europe has been doing the opposite – and what a haven from modern life it is.

Jennifer Barclay is the author of Wild Abandon: A Journey to the Deserted Places of the Dodecanese (Bradt, £9.99)

Favourite places to stay in the Dodecanese

Prices based on June/September; usually higher in July/August

Three Brothers Hotel, Mandraki
Step off the ferry and within minutes a simple room awaits. Ask for a balcony looking out to sea. It’s handy for the bus stop and car rental, and only a few minutes’ walk into the main village.
Doubles from €40 a night, nisyros3brothers.com

Anemos Hotel, Olympos
In one of the most picturesque villages in Greece, Anemos is a restored stone house built into the mountain, with private balconies looking over the sea – great for sunsets – and beds on a traditional soufa, or wooden platform.
Doubles from €50 a night, visitolympos.com

Ataviros Hotel, Embonas
On the edge of a wine-making village with great local produce on Ataviros mountain, this family-run hotel – with swimming pool – is a great base for hikes.
Doubles from €39 a night, ataviroshotel.gr

Tripas’ Rooms
To find Tripas’ taverna, simply go to Arki and walk a few minutes along a path to the square. The block of five simple rooms is a minute up the road. For coffee or breakfast, stroll down to the taverna.
Doubles from €30 a night, arki-island.com

Villa Melina, Pothia
This is a family-run hotel with swimming pool in a quiet neighbourhood in the centre of town, a short stroll to the harbour – with homemade cakes for breakfast!
Studios for two from €50 B&B, villa-melina.com

Cohili Villas
There’s no budget accommodation on Halki, so a little luxury is necessary. These villas, just outside the harbour village above Ftenagia beach, are peaceful and secluded, with lots of outside space.
Doubles from €100 a night (three-night minimum stay), chalkivillas.com

Home Videos The WORLD of WINE – Wine News. Cheap wine, tasting notes and cooking with wine The World of Wine – May 2021 … END_OF_DOCUMENT_TOKEN_TO_BE_REPLACED

How to visit Napa Valley on a Budget. In this video Carson and I explain a few ways to enjoy Napa on the cheap. Tip and advice about how to visit Napa … END_OF_DOCUMENT_TOKEN_TO_BE_REPLACED

Home Videos Get To Know Argentina Wine | Wine Folly If you love Malbec, Argentina is your ultimate wine region. But that’s not … END_OF_DOCUMENT_TOKEN_TO_BE_REPLACED