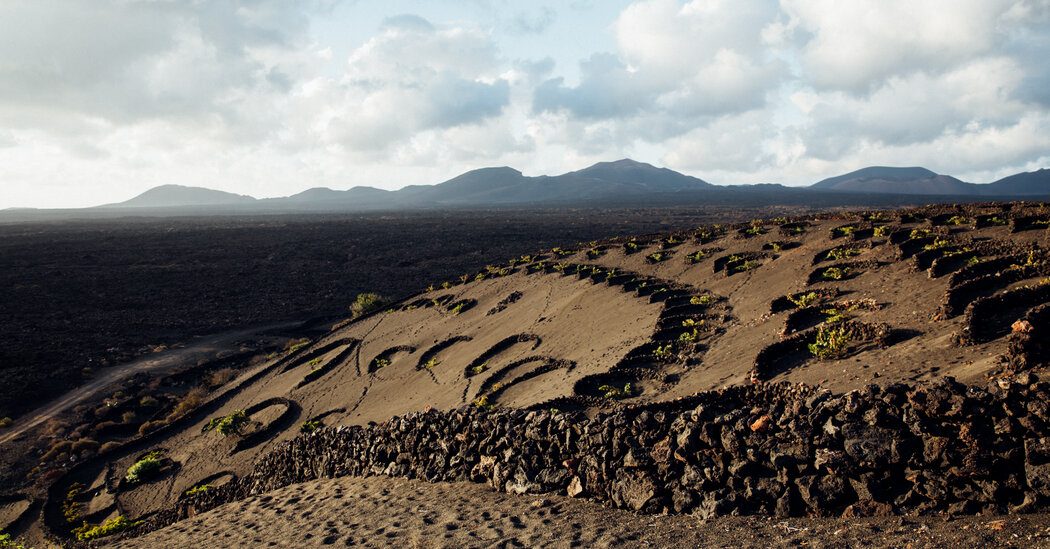 At the onset of the coronavirus pandemic, with travel restrictions in place worldwide, we launched a series — The World Through a Lens — in which photojournalists help transport you, virtually, to some of our planet’s most beautiful and intriguing places. This week, Mónica R. Goya shares a collection of images from the Spanish island of Lanzarote.

Situated some 80 miles off the southwest coast of Morocco, Lanzarote — with its stunning coastline, desert-like climate and plethora of volcanoes — is the easternmost of Spain’s Canary Islands. Major volcanic activity between 1730 and 1736, and again in 1824, indelibly altered the island’s landscape and helped pave the way for an improbable sight: a vast expanse of otherworldly vineyards.

In recent years, Spain has devoted more land to vines than any other country in the world. And while the Canary Islands, more broadly, have a longstanding wine tradition — the archipelago’s wines, for example, were mentioned in several of Shakespeare’s plays — nothing could prepare me for the uniqueness of Lanzarote’s vines.

The most remarkable wine area on the island is La Geria, a 13,000-acre protected landscape which lies at the foot of Timanfaya National Park, one of Lanzarote’s main tourist attractions. It was here in Timanfaya that volcanic eruptions buried around a quarter of the island (including La Geria) under a thick layer of lava and ash, creating a breathtakingly barren scene — and eventually leading to a new way of growing vines.

Many of the vines on Lanzarote are planted in inverted conical holes known as hoyos, which are dug by hand to various depths, each one made in search of the fertile soil underneath the ash and lapilli. In a counterintuitive twist, the ash plays an essential role in the vineyards’ success: It protects the ground from erosion, helps retain moisture and regulates soil temperature.

Low semicircular rock walls protect the vines from the merciless winds. Together with the hoyos, they contribute to an inventive growing method that might easily be mistaken for a network of sculptural art.

La Geria is a superb example of humans working hand-in-hand with nature. In a way, the immense — if desolate — beauty of this area is evidence of human resilience in the face of adversity: For hundreds of years, inhabitants here have managed to extract life from volcanic ash on an island often plagued by drought.

But changing weather patterns (including scarcer-than-usual rainfall) and harsh economic realities are persistent threats. The traditional hoyos system can yield about 1,200 pounds of grapes per acre. Other less traditional (and less time intensive) cultivation systems on the island can yield up to 6,000 pounds per acre — by utilizing higher-density growing techniques and some forms of mechanization.

An economist by trade and environmentalist at heart, the winegrower Ascensión Robayna has a strong connection to Lanzarote and a serious commitment to conservation. For years she has tended high-maintenance and low-yielding organic vineyards, adamantly asserting that this unique landscape, and the traditions embedded within it, must be kept alive.

“Growing vines in hoyos means that farmers adapted to the special circumstances of soil and climate, creating the most singular of the agrarian ecosystems,” she said.

There’s an obvious sparkle in Ms. Robayna’s eyes whenever she descends into the lava fissures, called chabocos, where trees and grapevines — especially muscat grapes, among the oldest of varieties — are grown. (Puro Rofe, a winery founded on the island in 2018, recently released a wine made exclusively from her chaboco-grown grapes.)

In the late 19th century, a pestilent aphid, phylloxera, decimated grapevines throughout mainland Europe. (The wine industry there was salvaged by grafting European vines onto American rootstocks, which were immune to phylloxera.) By contrast, phylloxera never reached Canarian shores. As a result, vines here can be planted on their own roots — a relative rarity in the wine world.

Hundred-year-old vines and unique grape varieties are a common sight across the islands. Malvasia Volcánica is arguably the island’s most well-known grape variety; others include Listán Negro, Diego and Listán Blanco.

Once, while visiting a set of vineyards near Uga, a small village in southern Lanzarote, I followed the winegrower Vicente Torres as he climbed barefoot — the traditional way of working here — up the hillside to inspect his vines. With the lapilli tickling my feet, and while sinking slightly with each step, I found the ascent more arduous than I’d anticipated. Growing anything in this soil, I learned, is hard work.

According to regulatory data, this year’s harvest is expected to be less than half of last year’s, with a forecast of about 2.6 million pounds of grapes.

“The oldest men around here say they don’t recall a year as bad for vineyards as this,” said Pablo Matallana, an oenologist who grew up on neighboring Tenerife but has family roots on Lanzarote. “We have been enduring two years of extreme drought. Some plots have debilitated considerably, and the vigor of the vines has decreased,” he said.

Rayco Fernández, a founding member of the Puro Rofe winery and a distributor praised for having been one of the first to showcase quality Canarian wines, agreed. “The drought is ruining vineyards,” he said, adding that the ash, where there is a thick enough layer of it, has been a lifeline.

But Lanzarote faces other threats, too. Tourism accounts for a significant portion of the island’s gross domestic product. And, despite a relatively low number of confirmed coronavirus infections, this economic sector has largely evaporated.

According to a Covid-19 economic impact study conducted at La Laguna University, Lanzarote’s G.D.P. is projected to drop by 21 percent.

With the number of winegrowers falling, and climate change wreaking havoc, the future of winemaking on Lanzarote appears more challenging than ever.

There’s no doubt, though, that the island holds a kind of mythical sway over its visitors. It’s been almost a year since my last trip to Lanzarote, yet I continue to revisit certain images in my mind: of vines emerging from the majestic hoyos at the foot of Timanfaya — a splendor still to be treasured there, at least for now.

Home Videos The WORLD of WINE – Wine News. Cheap wine, tasting notes and cooking with wine The World of Wine – May 2021 … END_OF_DOCUMENT_TOKEN_TO_BE_REPLACED

How to visit Napa Valley on a Budget. In this video Carson and I explain a few ways to enjoy Napa on the cheap. Tip and advice about how to visit Napa … END_OF_DOCUMENT_TOKEN_TO_BE_REPLACED

Home Videos Get To Know Argentina Wine | Wine Folly If you love Malbec, Argentina is your ultimate wine region. But that’s not … END_OF_DOCUMENT_TOKEN_TO_BE_REPLACED