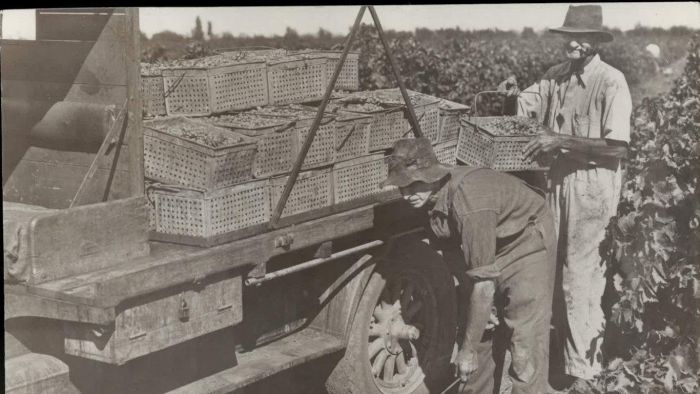 Australia’s largest wine region, which produces more than a quarter of the national crush, is rarely listed on a wine bottle label and is not very well-known outside its home state of South Australia.

Some growers have made it their mission to transform the Riverland’s bulk-wine image, to showcase the high-quality wines it has to offer.

The reputation of producing large volumes of cheap cask wine dates back to the early days of the 20th century when the Riverland was still establishing itself as a fruit bowl.

Reginald De Laine was a returned WWI soldier who had to learn how to farm after being placed on a block in the Riverland settlement of Winkie, not long after the war ended.

His son, Alan Delaine, who was born on the Winkie property 92 years ago, said grapes weren’t always the prize of the region and for a time, “citrus was king”.

“During WWII, the Americans, they liked their canned orange juice. And [growers] were making a lot of money out of it,” he said.

“But grapes when I was a kid, a lot of it was dried fruit.

“All the [returned soldiers], hadn’t done [much] fruit growing, they did quite a while at the orchard… they all had to learn how to prune,” he said.

“We had quite a lot of currants and some sultanas… but since the wine grape boom, the dried grape industry has virtually died.”

From hand-picking to machine harvesting

The focus on dried grapes quickly turned to wine grapes around the 1980s, when the Riverland shifted to different varieties and began to focus on export markets.

Cooltong wine grape grower Jack Papageorgiou moved to the region over 45 years ago and has been on his 34-acre property ever since.

He said, “sultanas and palominos” were the main varieties in the 60s, which has shifted to varieties such as shiraz and chardonnay today.

Mr Papageorgiou said there had also been a shift in production for the better, as his growing operation was now fully mechanised.

As the industry grew, and export markets opened up, it’s come at a cost for the Riverland, which is often left off the label and continues to produce its grapes almost undetected.

He said the Riverland, Murray Valley and Riverina collectively produce 73 per cent of Australia’s wine and are all in a similar position.

“We have this system in Australia called appellation and it’s been an advantage for some of the larger producers to produce wine without recognising the actual regions,” Mr Byrne said.

He explained it gave them the ability to blend grapes and produce wine to their own specifications.

“At the moment people recognise the Barossa, Clare, Hunter Valley and other producers… but unfortunately, we’re not getting recognised as a marketing brand,” he said.

The Cooltong grower believed a balance was needed between recognising the region which produces 461,000 tonnes a year, and producing bulk wine for major companies.

“I think it’s up to us grape growers to keep pushing that message that we need to have our recognition as a region, that we produce high-quality wine.”

There’s been a recent shift, with small boutique wineries and producers trying to promote the Riverland, and with the challenge of climate change, winemakers are turning to alternative grape varieties.

Winemaker and owner of Delinquente Wine Co, Con-Greg Grigoriou, grew up in the Riverland and made it part of his mission to showcase the region to wine drinkers across the world.

“I wanted to champion the Riverland and highlight the fact that the fruit comes from single vineyards sources, are premium, lower-yielding and higher quality.”

The ethos of the young winemaker’s brand is to push boundaries, which he is already achieving on a worldwide scale.

“For younger generations that I’m predominantly marketing to… no-one knows where the Riverland is and they don’t have any of the stigma that may be related to that bulk production background,” he said.

Home Videos The WORLD of WINE – Wine News. Cheap wine, tasting notes and cooking with wine The World of Wine – May 2021 … END_OF_DOCUMENT_TOKEN_TO_BE_REPLACED

How to visit Napa Valley on a Budget. In this video Carson and I explain a few ways to enjoy Napa on the cheap. Tip and advice about how to visit Napa … END_OF_DOCUMENT_TOKEN_TO_BE_REPLACED

Home Videos Get To Know Argentina Wine | Wine Folly If you love Malbec, Argentina is your ultimate wine region. But that’s not … END_OF_DOCUMENT_TOKEN_TO_BE_REPLACED