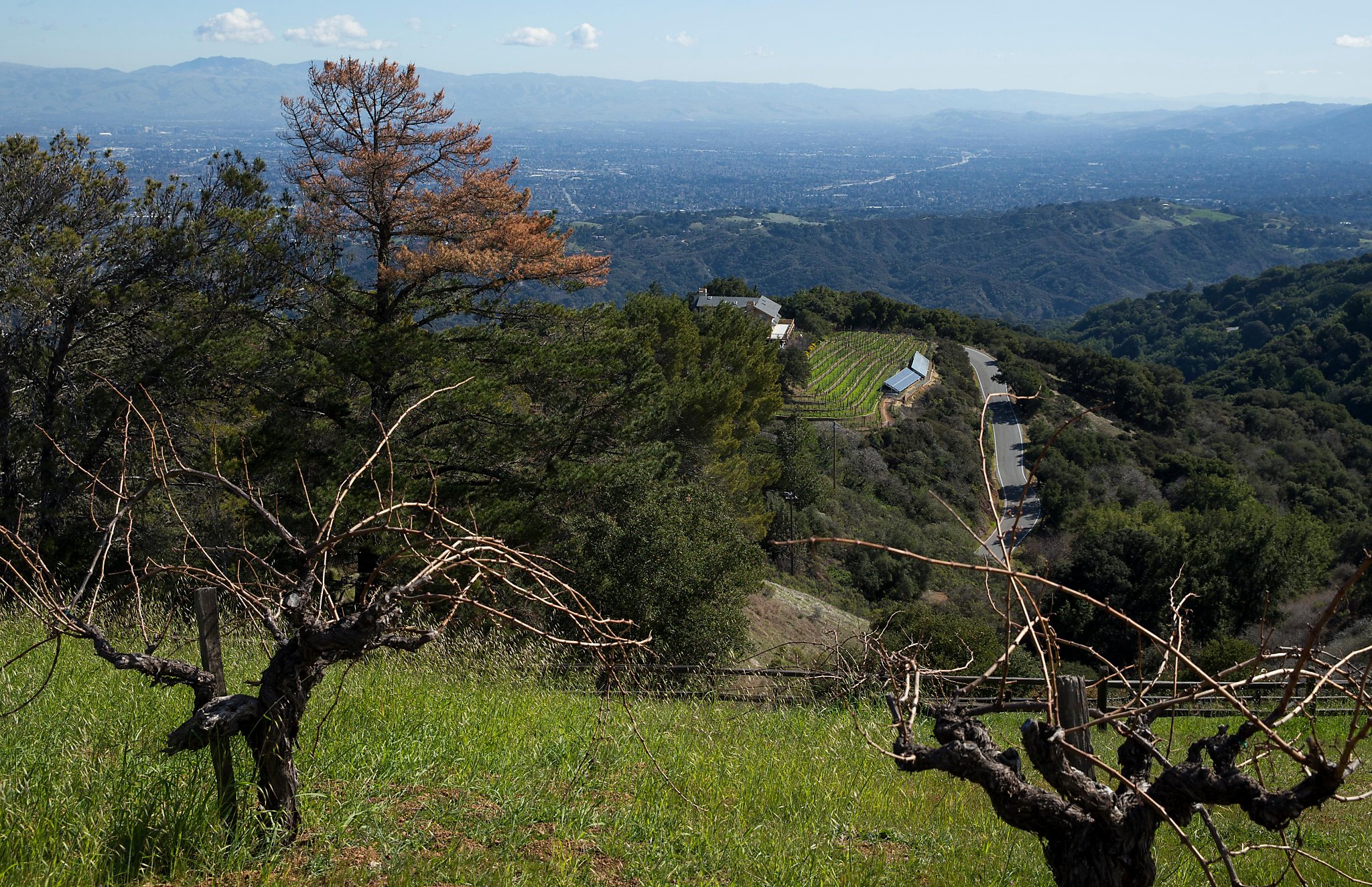 Ridge has two tasting rooms: One in Sonoma County called Lytton Springs and one in the Santa Cruz Mountains called Monte Bello. Here are reviews for each.

Ridge made its name in Cupertino, where the recently retired Paul Draper has been crafting one of California’s greatest Cabernet-based wines — full stop — from his Monte Bello Vineyard since 1962. The Lytton Springs property was built in Healdsburg in 2003 and produces about half of Ridge’s 80,000-case volume. The vineyards on the north side of San Francisco are no less a precious artifact than Monte Bello, with some of their field-blend plantings dating back as early as 1901.

Those vineyards contributed to the winery’s construction: Rocks from its soil now appear in the building’s exterior. Check out the glass panel at the entrance to the tasting room — that’s rice straw insulating the place, which eliminates the need for heating or cooling the tasting room area. (The production space still gets temperature control.) The spacious, comfortable tasting room has a bar where you can stand and imbibe, and there are outdoor tables too with first-come, first-serve seated tastings. (Be warned if you’re wearing your fancy wine-tasting shoes: The tables are sitting on dirt.) You can choose among several price tiers of tasting options, from $5 to $20; tours and seated tastings, available by appointment, go up to $50. And, by the way, there’s plenty of Monte Bello going around — to taste it costs an extra $10. –Esther Mobley

WHAT TO TRY: Sure, Monte Bello is great, but the Ridge Estate Cabernet, made in a similarly savory style, is not to be underestimated — and it’s less than half the price. Ridge makes a lovely Estate Chardonnay, taut and lean, and an elegant Estate Merlot. But don’t leave Lytton Springs without tasting some of the heady Zinfandel-based wines from the vineyards around here, especially the Geyserville and Lytton Estate bottlings.

INSIDE INFO: Ridge is famous for using American oak barrels for its wines, unlike the majority of high-end California wineries, which use French oak. What’s not as widely publicized is that they actually use Bourbon barrels — virgin, of course.

Atop the Ridge Monte Bello Vineyard, in one of its oldest parcels, I turned left and saw my home of San Francisco. I looked right and saw San Jose’s cityscape, and then stared straight ahead to see the Cupertino’s new, ring-shaped Apple headquarters. I could only imagine how different this vista must have been in 1949, when these head-trained Cabernet Sauvignon vines were planted — a century after the gold rush, and two decades before Don Hoefler would coin the term Silicon Valley.

Ridge is one of the most prized wineries in California — the world even — and the Monte Bello estate remains its crown jewel, as well as the name of its icon Bordeaux-style blend. The property’s history dates back to the 1880s, when Italian doctor Osea Perrone erected Monte Bello winery. The first Monte Bello wine was labeled in 1892, but the vineyards were abandoned during Prohibition. In 1949, William Short replanted the area to Cabernet Sauvignon, and for the first time, Chardonnay. The Monte Bello property has expanded and changed hands several times over the course of its history, eventually selling to Otsuka, a Japanese pharmaceutical company in 1986. Nonetheless, Paul Draper remained at the helm of Ridge since joining as winemaker in 1969 until his retirement in 2016. Today, Eric Baugher crafts the wines at Monte Bello and John Olney serves as winemaker at Lytton Springs, Ridge’s other facility in Sonoma County, although Draper reportedly remains involved.

During his tenure at Ridge, Draper championed pre-industrial winemaking, a series of practices that bring back 19th century techniques and emphasize minimal intervention. Perhaps, along with the tremendous site, these methods account for much of the flagship wine Monte Bello’s distinctive character — in addition to Ridge’s use of American oak barrels, a decision few high-end California Cabernet producers make today. In many vintages, Ridge Monte Bello can taste notoriously austere in its youth, but the wines always hold remarkable ageing potential. In the famous 1976 Judgment of Paris, when a panel of French judges blindly favored California Cabernet and Chardonnay against their Bordeaux and Burgundy counterparts, Ridge’s 1971 Monte Bello took fifth place for the reds. But, on the 30th anniversary reenactment of the contest, Ridge earned the top prize, conceivably a lesson in patience when it comes to understanding this wine.

It’s a longer journey than expected to reach the Monte Bello site. You scale the mountain along a twisted, slow-moving path, until you reach the property and the cabin-like wooden structure where tastings are held. In fact, the road is gnarly enough that several of Ridge’s employees choose to live on site. That was the case with the guide during my visit, a young man who not only lived on Monte Bello, but had grown up there as well. His family has worked at Ridge for generations, and he would catch the school bus from the same driveway were visitors now pull in. It was then I noted the value in reserving Ridge’s “Estate Tasting” and tour, rather than just enjoying a flight at the tasting bar. To be able to walk one of California’s most pedigreed terroirs in the company of someone who calls that land home emblematizes everything we can justly romanticize about artisan winemaking.

WHAT TO TRY: You can’t leave without tasting the icon wine, Monte Bello. The 2014 vintage was poured during my visit — a wine that dazzles with both finesse and structure, weaving flavors of rosewater and violet, crushed stones and graphite, pine needles and dust. But, all the wines at Ridge are truly fabulous. The Estate Cabernet Sauvignon ($60 for 750 ml) offers a relative bargain in comparison to Monte Bello ($200 for 750ml), and their various Zinfandel bottlings balance a savory rusticity with a bright red-fruited acidity (I’m particularly fond of the Pagani Ranch). Also, do not overlook their Chardonnays — pillared, sun-soaked expressions of California’s signature white.

INSIDE INFO: In addition to Monte Bello, Ridge operates a tasting room at their Lytton Springs property in Healdsburg’s  Dry Creek Valley. While I would certainly emphasize the majesty of tasting Monte Bello where it’s grown, you can still get a splash at Lytton Springs, the home of several other top Ridge wines.

Home Videos The WORLD of WINE – Wine News. Cheap wine, tasting notes and cooking with wine The World of Wine – May 2021 … END_OF_DOCUMENT_TOKEN_TO_BE_REPLACED

How to visit Napa Valley on a Budget. In this video Carson and I explain a few ways to enjoy Napa on the cheap. Tip and advice about how to visit Napa … END_OF_DOCUMENT_TOKEN_TO_BE_REPLACED

Home Videos Get To Know Argentina Wine | Wine Folly If you love Malbec, Argentina is your ultimate wine region. But that’s not … END_OF_DOCUMENT_TOKEN_TO_BE_REPLACED