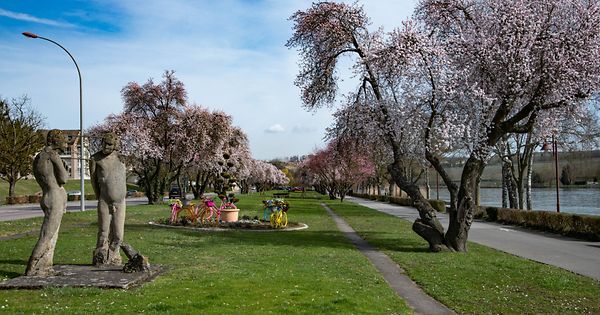 With a population of 3,732 and lying in a beautiful spot on the banks of the River Moselle, the wine-making town of Remich has a lot to offer day-trippers.

The smallest commune in Luxembourg by surface area, Remich’s origins date back to the 5th century when it was a Roman settlement called Remacum. In the 8th century, Frankish king Pepin the Short ceded his estate, Hof Remich to the Benedictine Abbey at Trier and the Prüm Abbey. In 882, Normans destroyed the settlement,but fragments of the medieval town such as the St. Nicolas gate are still there.

French King Louis XIV destroyed the town’s fortifications in 1647, and all that remains are the various coats of arms and guild symbols on the older houses of the town.

Remich is also known for its raucous Carnival celebrations, in which a straw man effigy called “Stréimännchen” is burned from Remich bridge. The town today has a beautiful 3km promenade lined with birch and cherry trees and dotted with sculptures and children’s play areas.

The parish church is registered as a national monument with its eye-catching 12th century tower, originally built as a watchtower in the Roman settlement, and all that remains of Remich’s old fortress. Adjacent to it is a listed site that includes old graves of the Lamort-Velter family, known for their patronage of the poor.

The Bacchus fountain, sculpted by Wil Lofy (also responsible for the humorous Hämmelsmarsch Fountain in Luxembourg City), depicts the Roman god sitting atop a wine cask. A Bacchus festival is held in Remich in August when the Riesling Queen is chosen and there are some 200 stands selling local produce for visitors to buy and sample.

The old alleyways of Remich allow visitors to step back in time. Maacher Gaass alley dates back to the 18th century and owes its name to the town’s mayor from that period. St. Cunibert street is named after town’s patron saint, who was born in Remich in 590 AD.

The internationally recognised architect François Valentiny designed the Remich Visitor Centre, which resembles a white cruiseliner moored at the banks of the Moselle. Its upper windows are at an outward angle and covered in an intricate design.

In addition to the tourist office the building houses Navitours which conducts boat tours subject to weather conditions. You can also buy Moselle products and handicrafts such as wine, honey and books in Luxembourgish. The upper floor houses an exhibition on the Moselle bridge.

You can also visit Valentiny’s Foundation in nearby Remerschen to see exhibits of his work in sketches, paintings and models.

Whether you want a long hike through the vineyards and the forests that surround Remich like a horseshoe, or prefer to learn a little more about the history of the town on foot, there are plenty of walks and hikes to do in Remich and its surrounds.

The Lauschtour app is available on Apple and Google and free to download. It has an audio guide for a walking tour of Remich (connect via GPS) which takes approximately 45 minutes, starting at the pier and then winding through the alleyways to the church and promenade.

An easy-rated 9.6 km trail that starts at the visitor centre takes you through the old alleyways out onto the Moselle path that leads through the vineyards up to Goldbierg, before returning to the promenade.

The 5.2 km culture trail takes in the town’s alleyways and other landmarks including the old school, the Bacchus fountain, St. Nicolas gate and the parish church. The shorter 3.4 km Heedbaach tour takes in the forests, crossing little wooden bridges before returning to the town.

As to be expected from its name, the Bësch trail loops through the forests continuing to Stadtbredimus on an 8.3 km hike that briefly follows the Moselle River before stopping at the beautiful sights of Lustgarten and Weiher Eitzpoul.

The 6.2 km Wéngerts Walk is a vineyard trail that takes in the Scheierbierg viewpoint which gives panoramic views over Remich.

Shorter walks include the Héichwaasser one, where over 1.3 km you can learn about the story of Remich’s historic floods via panels that include historic photographs. The banks of the river at times flooded bankside houses up to the first floor, giving the town its title as “Venice of the Moselle”. The Tour de la Memoire, covering a 2 km distance, remembers Remich’s holocaust victims and survivors. Each one has a “stolperstein” (metal plaque) designed by German artist Gunter Demnig.

You can find a full list of these hiking trails together with maps here.

You can rent bikes (helmet included) from Miselerland. Mountain bikes are €15, e-bikes €20 and ordinary cycles cost €12 for adults, €8 for kids. Cycle path Jangeli (path 7) travels from Remich to Mondorf. You can download a map of the route here.

The Marie-Astrid sales from Grevenmacher to Remich and Schengen, subject to weather conditions

In addition to Navitours, which runs small boat tours (tickets from the tourist office in Remich), you can also take a boat trip aboard the M.S. Princesse Marie-Astrid. It departs from Grevenmacher and journeys to Remich, then on to Schengen. Sailings are subject to weather conditions, and you can find the latest information here.

Things to do in the area

The Haff Reimich nature reserve is the largest wetland in Luxembourg and consists of 30 ponds that were former gravel and sand pits for industrial use. A unique ecosystem, the reserve is home to 250 bird species including the great crested grebe, which breeds there and is a mascot of the region.

The Haff Reimich nature reserve has 30 ponds and is home to 250 bird species Photo: Shutterstock

The Biodiversum (again by Valentiny architects) is the reserve’s exhibition centre, providing details of the history of the reserve from industrial times and exhibits on the local wildlife and plant life. There are a number of wetland nature trails from the centre.

Another nature reserve in the Manternach area is A Wiewesch. Located in a former farmhouse, it has an exhibition on the inter-dependence of nature and agriculture. Manternacher Fiels is a European protected area covering about 57 hectares and is the largest canyon forest in Luxembourg. It has not been cultivated for 50 years, and the only human trace are the hiking trails in the reserve.

In Bech-Kleinmacher you’ll find the A Possen Museum which replicates a typical regional winegrowers house from the 18th and 19th centuries, complete with authentic furniture. Set over 1200 m², the museum incorporates details on wine production, a workshop for shoemaking, a weaving mill and a collection of antique dolls, teddy bears and model railways.

In Wasserbillig, the aquarium houses both international exotic fish and local freshwater ones in 15 different aquariums.  Discus fish, perch, local pike, neon tetra and piranhas are just some of the species you can check out. The wonderful Butterfly Garden in Grevenmacher also has a small aquarium but is host to some 30 to 40 species of butterfly that fly freely within its 600 m² tropical garden. Home to Chinese quail, chameleons, turtles and bees, it is closed during winter but open from April to October.

In the nearby Mondorf-les-Bains thermal park you’ll also find the Aviation Museum which houses aeroplane parts, prototypes and accessories from the aviation pioneer era. Fifteen panels give insight into the history of aviation in Luxembourg from 1910 to the present day.

The Roman remains at Dalheim, known in those times as Ricciacus, were founded by Emperor Augustus. An important stop on the Via Agrippa from the Rhine region to the Mediterranean, the site includes a Gallo-Roman theatre and thermal baths. It’s only open June to September. You can download a tour on the Lauschtour app.

If you are in the area, it’s worth checking out a few panoramic view points from Scheierbierg in Remich to Diesermillen in Machtum.

Perhaps the most photographed is Koeppchen in Wormeldange, where the town’s best-known vineyard is dominated by the Chapel of Saint Donatus, patron saint of the local vineyards.

Another nearby town, Stadtbredimus is home to the winegrowers co-operative. The cultural trail covers the history of the town starting at its castle and going past the old public washhouse, the birthplace of writer Batty Weber, and the tomb of Luxembourg national poet Dicks.

Home Videos The WORLD of WINE – Wine News. Cheap wine, tasting notes and cooking with wine The World of Wine – May 2021 … END_OF_DOCUMENT_TOKEN_TO_BE_REPLACED

How to visit Napa Valley on a Budget. In this video Carson and I explain a few ways to enjoy Napa on the cheap. Tip and advice about how to visit Napa … END_OF_DOCUMENT_TOKEN_TO_BE_REPLACED

Home Videos Get To Know Argentina Wine | Wine Folly If you love Malbec, Argentina is your ultimate wine region. But that’s not … END_OF_DOCUMENT_TOKEN_TO_BE_REPLACED