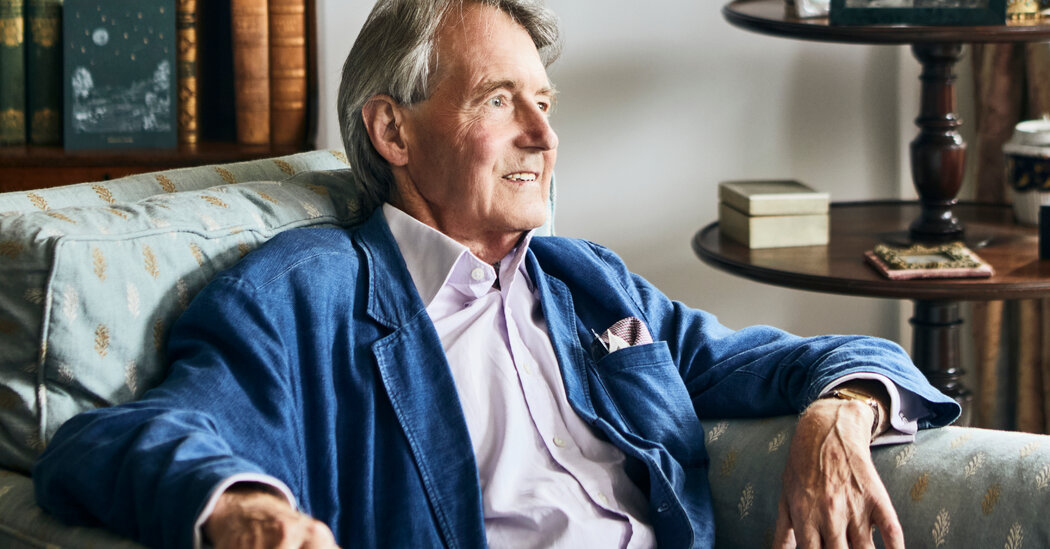 I met Steven Spurrier no more than a half dozen times or so over the years, but each time I came away the better for it.

For one thing, Mr. Spurrier, who died on March 9 at 79, always left me with something memorable.

The first time was in 2007 in Napa Valley at a conference of wine writers. We hadn’t met before and had barely introduced ourselves before the speeches began. As one person droned on, he passed me a note, apropos of nothing:

“One cannot hope to bribe, nor twist the honest English journalist. But considering what the fellows do unbribed, there is no reason to.”

It made me laugh. I later figured out he was paraphrasing Humbert Wolfe, an English writer of the 1920s and ’30s. Was Mr. Spurrier teasing me, poking fun at the presumed rectitude of a Times writer plying raffish waters?

Maybe he was trying to put me at my ease, knowing I had only a few years earlier stepped in for my predecessor, Frank J. Prial, who had been a friend of his in Paris.

Mr. Spurrier’s reputation by this stage of his career could not help but precede him. He’d been a columnist for Decanter, the English magazine, for many years. He was an author, educator, amusing public speaker and leader of wine tastings.

But most of all he was known for having conceived and arranged the Judgment of Paris, the famous 1976 wine tasting at which little-known American wines triumphed over their august French counterparts and won a toehold in the perception of wine lovers worldwide who had up to then dismissed them.

Not long after we first met, the ’76 tasting was memorialized on the big screen in “Bottle Shock,” in which Alan Rickman played Mr. Spurrier. The movie told the story from the point of view of Chateau Montelena, one of the winners. Even if it was clichéd and forgettable, how often is a wine writer a character in movies?

While “Bottle Shock” added little of note to the Judgment of Paris lore, I am looking forward to a documentary of the tasting due out this summer, from Jason Wise, the director of the “Somm” series. Mr. Spurrier was interviewed extensively for the project. Perhaps it will provide an insightful companion to the book, “Judgment of Paris,” written by George M. Taber, the sole reporter to have witnessed the event.

The second time I met Mr. Spurrier was in England in 2011, where I’d traveled to write about the relatively new phenomenon of English sparkling wine. Mr. Spurrier had by this time begun one of the final acts of his long career, transforming a sheep farm in Dorset overseen by his wife, Bella, into a vineyard for sparkling wine.

The visit was to begin with lunch at the Spurriers’ house in the tiny village of Litton Cheney. As it happened, I was caught in a tremendous traffic jam driving west from Hampshire and my car’s GPS system was stymied by the English custom of identifying houses by their affectionate names rather than address numbers. I was hours late.

No matter, the welcome was warm as could be, as was the invitation to visit Mr. Spurrier’s cellar to pick a wine for our (very late) lunch. The meal was freshly cooked, and scrumptious. Mr. Spurrier explained his plans for the wine and vineyard, to be called Bride Valley Vineyard, and outlined his strategy for creating multiple cuvées rather than just one.

Later, as we walked through the young vineyard, in a natural amphitheater of chalky soils facing south, Bride Valley seemed like an idyllic vision. The sound of bawling lambs and crowing roosters echoed across the valley, and I could see the patchwork of fields, divided by hedgerows and dotted with tiny clusters of buildings like something out of a Thomas Hardy novel.

Mr. Spurrier explained to me the underlying purpose of his project, which, like so many of his projects over the years, only secondarily considered the prospects of financial success.

For him, the crucial aim of his vineyard was to help preserve the rural culture of this part of England. As in agricultural areas all over Europe, Dorset had been losing its population as younger people were moving to urban centers looking for more lucrative, less laborious lives. For some, Mr. Spurrier hoped, the wine industry could provide an alternative.

“Historically, there’s no industry here apart from agriculture,” he said. “Nowadays, the houses are being bought by people as holiday houses.”

Mr. Spurrier also intentionally chose not to capitalize on his famous name. “I didn’t want Spurrier Vineyards,” he said. “Bride Valley Vineyard — it makes it regional. I preferred right off the bat to make it regional.”

However successful Bride Valley and English sparkling wine turn out to be, Mr. Spurrier’s legacy will remain his work as a wine writer, educator and provocateur. Few had more experience with the world’s rarest and greatest wines, but Mr. Spurrier was mostly an advocate for the gorgeous diversity of everyday wines. He never stopped exploring the regions around the world as they joined the global economy, making new grapes and new styles available to new markets.

Even as a young wine merchant in Paris in the early 1970s, a time when a few famous regions dominated the attention of wine lovers, he sought out bottles from lesser-known areas. His first book, published in the mid-1970s, was called “French Country Wines,” a catchall term for anything that did not originate in Bordeaux, Burgundy or Champagne.

This relentless curiosity piqued his interested in the wines of California, which in the 1970s was considered no more than a backwater among wine regions. With prodding from Patricia Gallagher, his American partner in L’Académie du Vin, the wine school he ran in Paris alongside his wine shop, Cave de la Madeleine, the idea for the 1976 event took shape.

The subsequent tasting, held on May 24, 1976 at the Intercontinental Hotel in Paris, may not have revolutionized the world of wine, as suggested by Mr. Taber’s book. But it did provide a sorely needed vote of confidence to a California wine industry just entering the global market and helped to fuel its rapid growth through the 1980s and ’90s.

The mythology of the tasting, with its juicy “gotcha” of the French wine judges, has served jingoistic American interests ever since, not least in the “Bottle Shock” movie, which portrayed the American victory as a triumph over overbearing French snobbery.

The truth, of course, is far more complex. Every one of the American wines in that tasting was made by people who venerated French wines, and who used French grapes and French methods to make wines that they hoped might stand in the company of French bottles.

While the tasting opened minds to the possibilities of American wines, it did not change people’s habits or tastes. Mr. Spurrier himself, in a 2020 article, described his own cellar as 90 percent European and 70 percent French.

In a just-published new edition of his memoir, “Steven Spurrier: A Life in Wine,” he described going through his cellar, “opening the odd bottle that had been forgotten for years.”

He tasted 2001s from the Douro region of Portugal, a 2000 syrah from Dominio de Valdepusa near Toledo in Spain, “still full of velvety rigour,” Brunello di Montalcinos from 1999 and cabernets from Margaret River, Chile, Tasmania and Napa Valley.

“Each of these wines and others had a story to tell of the place and the people,” he wrote, “but, as the last bottles of Léoville Barton from the 1990s reminded me, ‘One always comes back to claret.’”

Home Videos The WORLD of WINE – Wine News. Cheap wine, tasting notes and cooking with wine The World of Wine – May 2021 … END_OF_DOCUMENT_TOKEN_TO_BE_REPLACED

How to visit Napa Valley on a Budget. In this video Carson and I explain a few ways to enjoy Napa on the cheap. Tip and advice about how to visit Napa … END_OF_DOCUMENT_TOKEN_TO_BE_REPLACED

Home Videos Get To Know Argentina Wine | Wine Folly If you love Malbec, Argentina is your ultimate wine region. But that’s not … END_OF_DOCUMENT_TOKEN_TO_BE_REPLACED