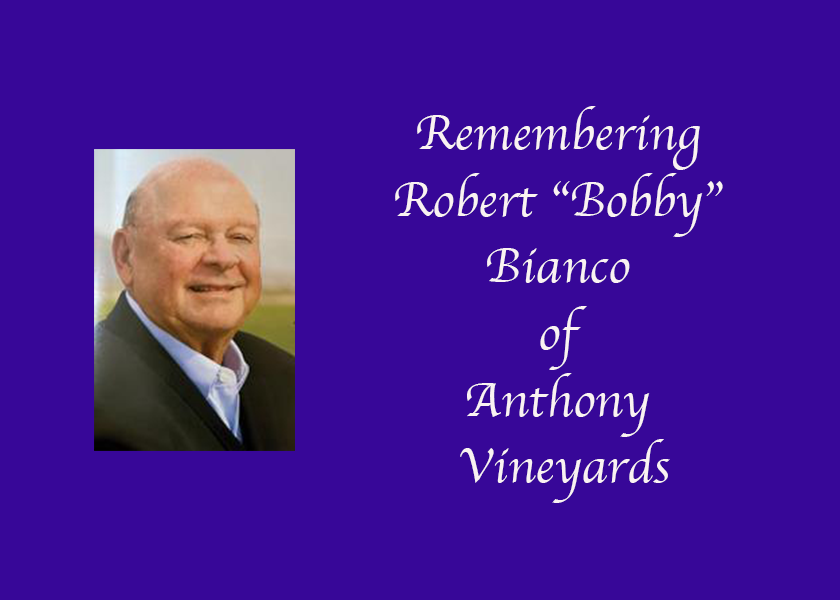 Bianco, 78, was born in the Bronx, N.Y., and moved to California as a young child, according to his obituary in the Bakersfield Californian newspaper.

From the desert surrounding Indian Wells, Calif., Bianco and his wife, Harlene, built a family and a business, Anthony Vineyards, Bakersfield, Calif.

While holding executive positions at Sun World International, the Bianco brothers didn’t take a salary from Anthony Vineyards, according to the obituary. Instead, they reinvested that money into the expansion of the company into a large, commercial-scale level of table grapes.

The company included 10,000 acres of organic and conventional table grapes, dates, citrus and peppers. Also, the Bianco brothers partnered with Prime Time International since its initial founding, and they are co-owners of SunDate, both in Coachella, Calif.

Bianco’s company has employed thousands of farmworkers the past 50 years.

“He always treated everyone with dignity and respect,” according to the obituary. “His daily presence at Anthony Vineyards walking the fields and interacting with people will be greatly missed. Bobby was a powerful leader and a talented mentor.”

Bianco was a longtime member of the boards for the California Table Grape Commission and the California Grape and Tree Fruit League. He was president of the California Desert Grape Administrative Committee since 1980 and served as chairman and director of American AgCredit Bank for 15 years.

Bianco helped develop and expand the Red Flame Seedless grape, a new variety that gained traction in the mid-1970s, according to the obituary.

Beforehand, most grape varieties contained seeds. Bianco shared his knowledge and experience about this new variety with grape growers who came from around the world to learn about it.

Recently, Bianco and Notre Dame established the Bobby & Harlene Bianco Grant in Aid, an annual scholarship for a football player who comes from a farming family.

Bianco loved to tell stories of growing up in an Italian household with a mother who spoke no English and father who had only an elementary school education. Despite his limited education, his father succeeded in business and was named the “Juice Grape King of the United States” by New Yorker Magazine in 1958, according to the obituary.

In 2019, Anthony Vineyards expanded its cold storage capacity by 50,000 square feet, enabling the production of 20 kinds of grapes sold under 10 labels, according to The Packer. About 70% of the company’s grapes were organic.

Bianco is survived by a son, Anthony A. Bianco, and a daughter, Francesca R. Gist, and six grandchildren.

Anthony Bianco used to eat lunch with his father every day and continues to oversee operations at Anthony Vineyards in Coachella.

Home Videos The WORLD of WINE – Wine News. Cheap wine, tasting notes and cooking with wine The World of Wine – May 2021 … END_OF_DOCUMENT_TOKEN_TO_BE_REPLACED

How to visit Napa Valley on a Budget. In this video Carson and I explain a few ways to enjoy Napa on the cheap. Tip and advice about how to visit Napa … END_OF_DOCUMENT_TOKEN_TO_BE_REPLACED

Home Videos Get To Know Argentina Wine | Wine Folly If you love Malbec, Argentina is your ultimate wine region. But that’s not … END_OF_DOCUMENT_TOKEN_TO_BE_REPLACED