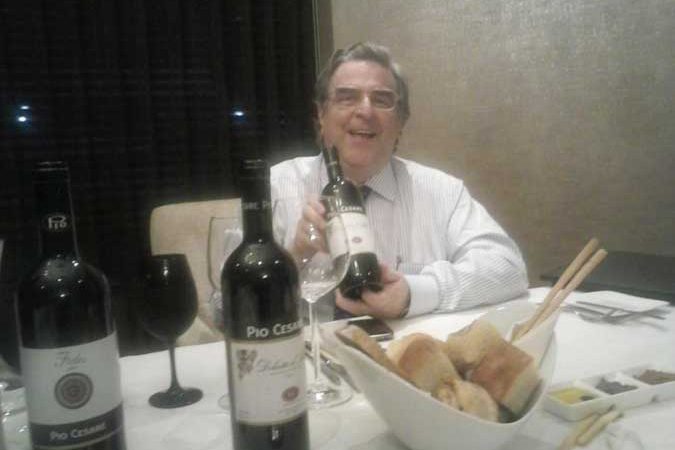 The COVID-19 pandemic is really getting out of hand.

It was early last year when COVID first surfaced in the world, and here in this country we were seemingly not as concerned as at first it was not directly affecting us. But now, over a year and half since its discovery in Wuhan, China, the devastation is hitting much harder and closer to home. Suddenly it is truly scary, and we all may have direct relatives, close friends, and even heard of well-known personalities who have had the virus. My own sister and her entire family were infected – thankfully they have fully recovered already.

While my sister and her family were fortunate to win their bouts with COVID, a friend of mine, and a true bastion of the wine industry — not only in his country of Italy, but also of the world — Pio Boffa, the 4th generation owner of the renowned Piedmont winery Pio Cesare, succumbed. He died of COVID related complications on April 17. Pio Boffa was 66 years old.

LARGER THAN LIFE PERSONALITY
The first time I met Pio Boffa was in late 2012 when Pio came to Manila. Pio was quite a dapper gentleman. He might have appeared intimidating at first with his authoritative tone and no B.S. manner of expressing himself, but this was what made him a legend in the industry. Wine people —  as I have known throughout my career —  are extremely passionate about their trade and Pio was as overly zealous as they come.

In this first meeting, I had the privilege of joining a private wine tasting of several Pio Cesare wines with fellow writer and local icon (and my good friend) chef Gene Gonzales. The Pio Cesare Barolo Classico, the Barolo Ornato (single vineyard), the Barbaresco Classico, the Il Bricco Barbaresco (single vineyard), and the Fides Barbera (single vineyard) were among the nine different wines we tasted in a private function room at the now defunct Tosca Italian restaurant of the Dusit Thani Hotel Makati. With no less than Pio Boffa presiding over the tasting, this was indeed a showcase of not only the best of Pio Cesare, but also the best of Piedmontese wines. Pio was very animated about his wines during our discussions, and indeed Pio was a major influence on me becoming a “Nebbioholic” (a term I coined to describe wine lovers who are addicted to Nebbiolo varietal wines like Barolo and Barbaresco).

The next year, when Pio found out I was going to Florence to attend a Tuscan wine event, he insisted that I visit his winery in Alba, some 400 kilometers away. Pio even arranged for his car and chauffer to pick me up one morning in Florence to comfortably drive me to Alba, which was three hours away. Aside from visiting their historic late 19th century winery (the Pio Cesare winery is nestled enviably in the center of Alba itself), I was toured by his nephew Cesare Benvenuto, enjoyed good food and more Pio Cesare wines, and I was also billeted in Pio Boffa’s ancestral house which has a breathtaking view of the Alps. His hospitality and generosity were genuine and went way beyond just professional courtesy.

Pio may not have been the friendliest nor had the most approachable demeanor of a person you would meet, but he always had a good heart and soul.

INTERVIEW WITH PIO BOFFA
As a tribute to our late industry legend, Pio Boffa, I present here some excerpts from a nearly 10-year-old interview I had with him depicting a bit of who Pio Boffa was and how his unique character and strong dedication would be badly missed:

Author: When did you start with the Pio Cesare winery?

Pio: I started in 1972 when I was still in my teens. My dad was my boss. It was in the mid-1980s that the rein of the company was passed to me. But I still worked together with my dad a lot during those times.

Author: Why is Pio Cesare Barolo priced similarly to its Barbaresco, when most of the Piedmont wineries would price Barolo higher?

Pio: Why shouldn’t I price them the same? There is no reason for me to price Barolo and Barbaresco differently. Both wines are from low-yield harvest, [have the] same labor cost, same three years period in oak barrels, same kind of barrels — everything the same except the value of the vineyards. But I do not think like that. The value of the vineyards only matters when you need to sell them. These lands are for my family’s next generation. (Author’s Note: The regulation on Barolo is it has to spend a minimum of 18 months in barrel. For Barbaresco, the minimum is nine months in barrel. At Pio Cesare, both these classic wines undergo the same oak aging treatment, way beyond the required minimum.)

Author: Why are Pio Cesare’s Barbera and Dolcetto more expensive than other Piedmont brands?

Pio: A dominant percentage of these wines come from our own vineyards. Since majority of our own vineyards are in the prime Barolo and Barbaresco areas, where we could have planted just Nebbiolos and make more Barolos and Barbarescos, we opted to also plant other cheaper varietals like Barbera and Dolcetto. That is why some people find us crazy for doing this as it makes no economic sense. We feel that we can make more complex versions of these varietals if planted in the prime locations. And that is why we do it, and price is actually very good if you look at our quality.

Author: When is the peak time to drink your Barolo or Barbaresco? (Author’s note: This question, though quite common, brought out some perked-up frustration from Pio — let the fireworks begin)

Pio: Let me first say I am disappointed that I am always asked this question. Is there really an answer to when a wine peaks? It is to me an exercise in futility. Wines over a period of time will be different. To say it is better or worse is entirely subjective. It depends on whether one likes wine with more tannin, more acid, more bouquet, and so on — all that affect wine during the bottle aging process. And there are the issues of storage, cork quality, and so on.

(When I interjected that the French Grand Crus always talk of aged Bordeaux and several new releases as being too young to drink, Pio became livid.) Well, what can I say… (some expletives). We cannot make excuses for young wines. When we release the wines, it is for drinking. The Italians created wines for pleasure of drinking with food. So even if a young wine like a Barolo is austere, it will still be good to taste with food.

Wines will change over time of course, but it really depends on the drinker’s preference. The beauty in drinking the same wines at different stages is to discover how these wines age and differ over time. I would refrain from giving a time for my wines to be drunk, though I can tell you that my Barolos and Barbarescos can last a very long, long time.

Author: Other countries, and other regions outside of Piedmont have been making Nebbiolo wines too. Have you tried any? And what is your opinion on these New World Nebbiolos?

Pio: I have tried Nebbiolos made in Australia, and it is also good. But while the New World can probably make good Nebbiolos, these wines still will not have the soul of a real Nebbiolo wine grown in a Barolo and Barbaresco.

Holding no punches in that interview, that was what Pio Boffa was all about, and that is reflected in the Pio Cesare wines too where quality and consistency are always the priority. With Pio Boffa’s sudden departure, the Pio Cesare winery will still be managed by the family, with daughter Federica (5th generation), nephew Cesare, and cousin Augusto handling the day-to-day business of the winery, which is, incidentally, marking its 140th year anniversary. Pio Boffa will long be remembered as the great Piedmont and Pio Cesare wine ambassador of the last half century. ‘Saluti a te’ up in heaven!

The author is the only Filipino member of the UK-based Circle of Wine Writers. For comments, inquiries, wine event coverage, wine consultancy and other wine related concerns, please e-mail the author at protegeinc@yahoo.com or via Twitter at www.twitter.com/sherwinlao.

Home Videos The WORLD of WINE – Wine News. Cheap wine, tasting notes and cooking with wine The World of Wine – May 2021 … END_OF_DOCUMENT_TOKEN_TO_BE_REPLACED

How to visit Napa Valley on a Budget. In this video Carson and I explain a few ways to enjoy Napa on the cheap. Tip and advice about how to visit Napa … END_OF_DOCUMENT_TOKEN_TO_BE_REPLACED

Home Videos Get To Know Argentina Wine | Wine Folly If you love Malbec, Argentina is your ultimate wine region. But that’s not … END_OF_DOCUMENT_TOKEN_TO_BE_REPLACED