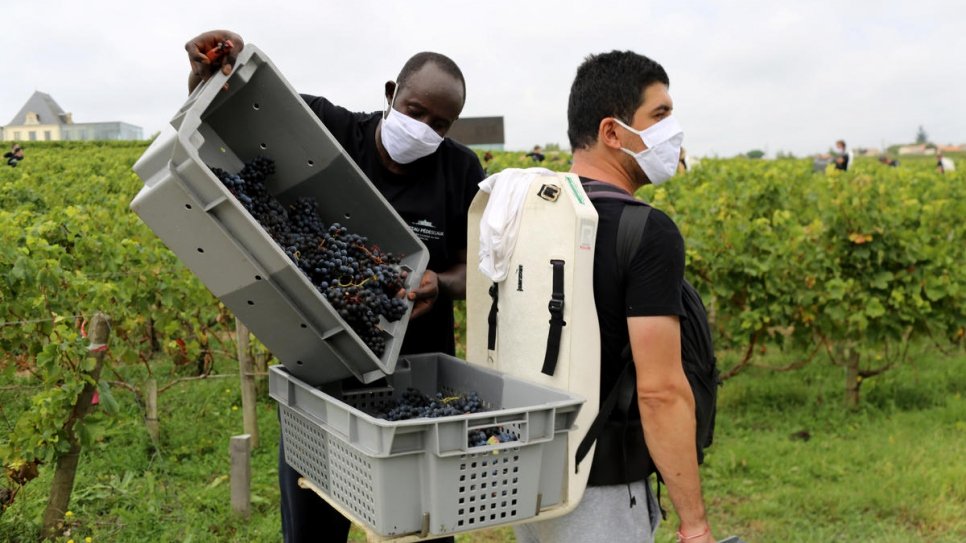 When Zakaria arrived in France as a refugee from Sudan, he did not imagine his new life would include picking grapes and playing rugby.

Yet he is one of dozens of refugees employed as seasonal workers by Château Pédesclaux, in southwest France, providing a vital service to an industry that suffers from a labour shortage at harvest time.

“I have found a job, my children are in school. I feel safe here.”

One morning last October, Zakaria sat in the sunshine after a morning’s work with about 30 other grape pickers at the vineyard, discussing the previous evening’s rugby training.

“I have found a job, my children are in school. I feel safe here,” he said.

Wine and rugby are a perfect match in southwest France, which is famed both for its wines and as the heartland of French rugby.

The Château Pédesclaux, which was given the prestigious regional wine classification Grand Cru in 1855, is located in Pauillac municipality, in the Grands Crus du Bordelais wine region,

To satisfy the demand for labour, the chateau joined forces with Ovale Citoyen, an association that uses rugby and other sports as a way of promoting team-building and inclusion.

Since the beginning of the COVID crisis, the association has also offered seasonal work to people in need, including refugees, in a project called “Drop in the Fields”.

“The employment potential in the vineyards is huge. Viticulture, like everyone else in agriculture, has a shortage of labour and this lack has been exponential since the COVID crisis began,” said the association’s founder Jean François Puech.

For Zakaria, it was a lifeline as he started to rebuild his life with his wife and two children once he was granted refugee status in 2017.

Even so, the COVID-19 pandemic made the harvesting project tougher.

“There was a lot of uncertainty about our ability to have people among the vines. But the vines won’t wait for us. We follow the cycle of the seasons,” said Vincent Bache-Grabielsen, technical director of Château Pédesclaux.

“What is great about Ovale Citoyen is the energy they put into making it happen,” he said.

Ninety refugees helped bring in the grapes during the harvest or vendage. A further 15 took part in training for other jobs in viticulture, such as tractor driving, which offer the possibility of year-round employment. Ovale Citoyen also offers training for a wide range of careers in the wine industry, as well as social and legal support.

France, like many other countries in Europe, has taken a lead in setting up projects to integrate refugees and they now help fill labour shortages in several industries.

Sport plays a central role, in part because Ovale Citoyen was created by former professional rugby players from Union Bordeaux Bègles. In fact, the word ‘ovale’ refers to the shape of a rugby ball. The group also promotes football and boxing.

“Rugby has social values, values ​​of the heart and it seemed very important to us that refugees should be able to benefit from them,” said Puech.

Ovale Citoyen advances social integration and the idea that everyone has a place on the field regardless of their social situation, their studies or their physique, he said.

The ultimate goal is inclusion. The motto of founders Jean-François Puech and Christian Lacini is: “Whatever a person’s origin, religion, sexual orientation or even their history, every human has the right to happiness.”

Home Videos The WORLD of WINE – Wine News. Cheap wine, tasting notes and cooking with wine The World of Wine – May 2021 … END_OF_DOCUMENT_TOKEN_TO_BE_REPLACED

How to visit Napa Valley on a Budget. In this video Carson and I explain a few ways to enjoy Napa on the cheap. Tip and advice about how to visit Napa … END_OF_DOCUMENT_TOKEN_TO_BE_REPLACED

Home Videos Get To Know Argentina Wine | Wine Folly If you love Malbec, Argentina is your ultimate wine region. But that’s not … END_OF_DOCUMENT_TOKEN_TO_BE_REPLACED