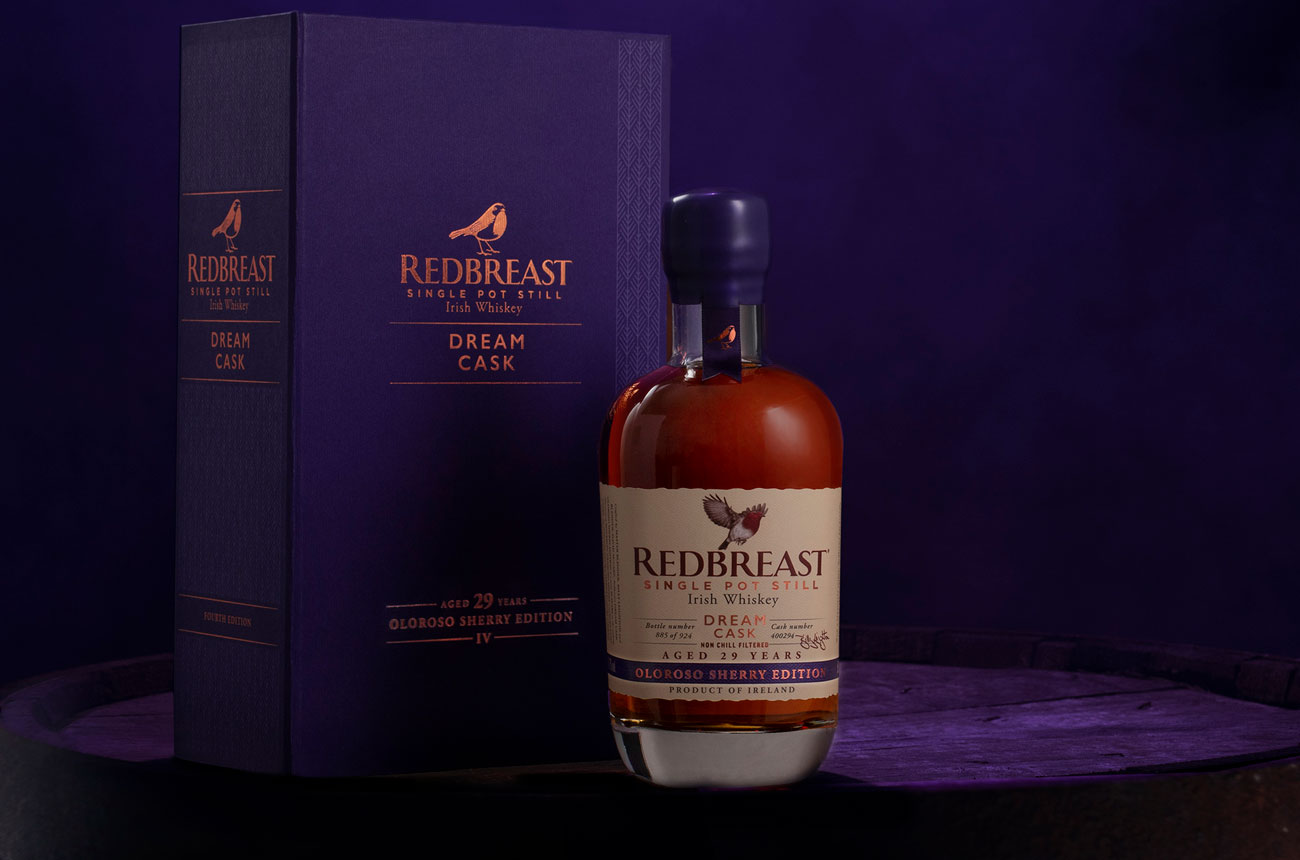 From starting life as ‘a bit of fun’ for World Whisky Day four years ago, the release of the latest Redbreast Dream Cask single pot still Irish whiskey has swiftly become one of the most anticipated events in the whisky calendar.

‘There is no greater joy in my job than to come across an excellent cask while conducting a sensory assessment of our whiskeys,’ says Leighton. ‘To craft the 2021 expression, we experimented with new ways of vatting, marrying and finishing to create something greater than the sum of its parts – and we are delighted with the result.’

The fourth Redbreast Dream Cask release has its roots in the creation of last year’s bottling, Redbreast Dream Cask Ruby Port Edition. At the time, Blender Dave McCabe had the idea of filling two casks – one seasoned with Port, the other with oloroso Sherry – and letting them mature in parallel. While the Port cask was bottled last year, the oloroso butt was left to mellow for a further 12 months.

‘The cask is giving additional, Sherry-derived flavours,’ explains McCabe, ‘but a lot of that additional time in cask is allowing the complexity to come through. There are extra layers of flavour that weren’t in the Port edition, and a subtlety to the spiciness.’

An exercise in complexity

Creating a Redbreast Dream Cask bottling is a complex exercise. The Oloroso Sherry Edition is a vatting of four single pot still whiskeys, all of them at least 29 years old and previously matured in ex-bourbon, ruby Port and Sherry casks before being combined in the oloroso Sherry butt.

The result is a whiskey of astounding complexity, encompassing everything from luscious berry fruit to raisins, baking spices and tangy marmalade. Mouth-filling and rich, but also of such impeccable balance and harmony that off-sets Redbreast’s trademarked spices, while also being perfectly approachable at its natural strength of 51.2% abv.

The release – available exclusively through an online ballot hosted on Redbreast’s members’ club, The Birdhouse, from Monday 17 May – provides a showcase for the highly distinctive single pot still style. The combination of malted and unmalted barley creates a uniquely silky, spicy spirit that combines perfectly with fine Sherry casks sourced from Jerez de la Frontera in Spain’s Andalusia.

The rise of Redbreast

That union of liquid and cask has been the secret of Redbreast’s global success; from the moment when wine merchant W&A Gilbey filled an empty Sherry cask with whiskey from John Jameson & Son’s Dublin distillery in the late 1800s, through the creation of the first Redbreast label in 1912, right up to the whiskey’s current renaissance.

Over the past decade, the Redbreast family has expanded, moving from an initial 12-year-old expression to include whiskeys at 15, 21 and 27 years of age, plus Redbreast Lustau Edition, created as a tribute to the Sherry industry.

In the process, Redbreast has become one of the world’s most prized whiskeys, with the Dream Cask bottlings cementing that lofty status. But these annual releases shouldn’t be taken for granted, explains Leighton.

‘We have ongoing trials, and when something pops out of those trials, then it’s great,’ he explains. ‘We have about 1.8 million casks of maturing whiskey, so it would be difficult not to have one of these coming around every year.

‘But I wouldn’t want to give a watertight guarantee – because we wouldn’t release one of these Dream Casks just for the sake of it.’

Only 924 bottles of Redbreast Dream Cask Oloroso Sherry Edition will be released, exclusively through an online ballot hosted on The Birdhouse. The ballot will be live from 17-25 May, when successful participants will be given the chance to purchase a 500ml bottle for €520.

‘A rich and complex array of aromas, with liquorice, dried fruits and a freshly crushed garden mint character to the fore, while dark berries and delicate touches of orange marmalade build over time, working in tandem with the pronounced aromas of worn leather, tobacco leaf and nutmeg. Cinnamon spice and sweet vanilla highlight the intricate nature of the oak, complementing and enhancing the pot still spices.

‘The palate is luscious and full, with succulent berry fruits, soft anise spice and mild tannins. The taste effortlessly evolves, with notes of dark brown sugar, vanilla and raisins adding a sweet element to create balance with the pot still spice, while cinnamon and nutmeg remain constant in the background. A lingering finish, with the spices slowly fading, allows the oak and fruit to have the final say.’

‘Immediate impressions of opulence and intensity. A rich, seamless bouquet of dried apricot and raisin, then fragrant sandalwood lifted by zestier clementine notes. There’s a thread that moves from herbal through anise to dark liquorice, and you can feel the age in the nuttier elements, and the scent of old leather. Hugely complex, but never fragmented – held together by a silkily mouth-coating texture and plump, plummy fruit.’

Home Videos The WORLD of WINE – Wine News. Cheap wine, tasting notes and cooking with wine The World of Wine – May 2021 … END_OF_DOCUMENT_TOKEN_TO_BE_REPLACED

How to visit Napa Valley on a Budget. In this video Carson and I explain a few ways to enjoy Napa on the cheap. Tip and advice about how to visit Napa … END_OF_DOCUMENT_TOKEN_TO_BE_REPLACED

Home Videos Get To Know Argentina Wine | Wine Folly If you love Malbec, Argentina is your ultimate wine region. But that’s not … END_OF_DOCUMENT_TOKEN_TO_BE_REPLACED