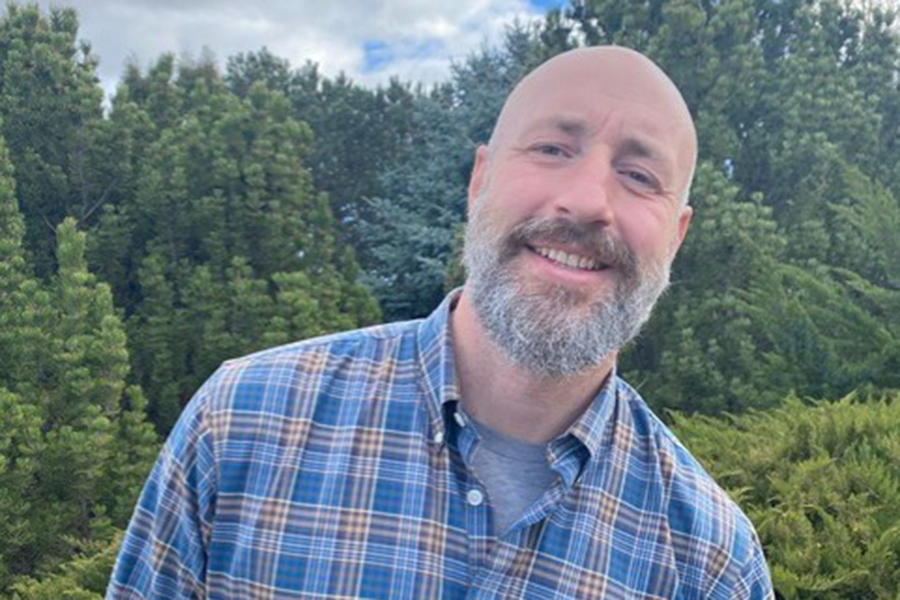 Viticulturist Matt Halldorson came from Arizona to make the vineyards of the Yakima Valley his professional home, working most recently for the biggest of the big, Ste. Michelle Wine Estates.

In February, he made another big move when he left the mega producer to join Kiona Vineyards and Winery, the family-owned estate that was the first to cultivate grapes on Red Mountain.

It’s not just a big move for Halldorson. It is a big move for the Williams family of Kiona, which has managed its acres since the original vines were planted in 1975.

Now in its third generation, Kiona brought in a viticulturist as it takes a bird’s eye view of the operation, said JJ Williams, who works alongside his father, Scott, and brother, Tyler. Together, the Williams family  oversees an operation that includes farming, winemaking and a public tasting room.

His parents, Scott and Vicky Williams, aren’t leaving. The couple are building a new home at Red Mountain. And the family not only works in close quarters during the week, it skis together on weekends, cramming into a 400-square-foot condominium near White Pass.

But at 62, Scott and his family recognized it was time to think about transitions and bring in a professional who shares his commitment to science-based farming.

“(Scott) knows the ins and outs of these 272 acres like no one else. But for any organization to have so many eggs in one basket is a dangerous thing,” said JJ, who shares the title of general manager with his father and brother.

Halldorson, who has worked vineyards across the region, knows the area and shares the Williams family’s scientific mindset.

“He’s a good farmer. He’s got science chops,” JJ said, adding, “Given our engineering and science backgrounds, we tend to farm more on the science end of the spectrum. We like to know why things happen.”

Halldorson studied plant biology at Northern Arizona University and graduated in 2008, in the teeth of the Great Recession. The promised jobs were not there. He took odd jobs, including firefighting, but did not give on his dream of working around plants.

He found his path when he contacted Markus Keller in the Washington State University Viticulture and Enology program. Soon, he was headed to Washington to attend graduate school and a paying job. WSU led to a job with Wykoff Farms and then Ste. Michelle Estates, putting him in charge of vineyards from Paterson to Red Mountain.

He’s excited to work Kiona Vineyards and its comparatively smaller acreage. Kiona grows grapes on five vineyards: Kiona Estate, Heart of the Hill, Ranch at the End of the Road, Artz Vineyard and Sunset Beach. Collectively, they supply grapes to its winery and under contract to 60 others.

“If you really want to understand how things work, you need that scientific background,” he said. “People pay really good money for these (Red Mountain) grapes and they need to be absolutely as perfect as they can be.”

Kiona Vineyards and Winery is the brainchild of a pair of Hanford engineers and metallurgists, John Williams and Jim Holmes.

The pair met at General Electric and collaborated with wine pioneer Walter Clore of the Washington State University extension.

Clore, considered the father of Washington’s wine industry, was testing the commercial viability of growing wine grapes in Washington in the 1960s. Williams and Holms lent their engineering expertise.

They suspected Red Mountain would be a good grape growing area. There were no roads, infrastructure or irrigation. But the land was cheap and 1972, the two bought 10 acres. JJ called it a handshake deal that depended on successfully drilling a well.

The engineers predicted they’d hit water at 550 feet and they did. The well continues to supply domestic water.

The first vines were planted in 1975. Scott, then in high school, recruited friends to help. Cabernet, Riesling and Chardonnay went in first. Lemberger and other varieties came later.

The vineyard grew to 24 acres in the mid-1980s and to 60 a decade later. Today, Red Mountain is among Washington’s best-regarded growing areas.

It is a distinct American Viticultural Area (AVA) within the Yakima Valley AVA. Its grapes command premium prices. The AVA has more than 2,200 planted acres and is best known for its red grapes.

The founders kept their jobs at Hanford and treated wine as, JJ described it, “a side hustle.” The Washington Association of Wine Grape Growers honored John Williams and Jim Holmes with a Lifetime Achievement Award in 2016 for their work to develop the industry.

Son Scott made it a career and is credited with turning Kiona into the business it is today. The winery produces 25,000 cases a year, making a “big small” winery. He studied agricultural engineering at WSU and made a career of farming the land.

JJ and his brother Tyler grew up on “the hill.”

“You can take 10 steps out the door of the family home and be in the vineyard,” JJ said. Kiona was the family business, but it wasn’t handed to the brothers.

Both earned degrees at Gonzaga. JJ sold wine in the Seattle area and lived in Italy. Tyler, the winemaker, worked in wineries around the world before coming home.

“My parents made it pretty clear early on that while it wasn’t an expectation, we could work in the family business. But if it was an interest, we couldn’t just mosey in because of what our last name was,” JJ said.

Home Videos The WORLD of WINE – Wine News. Cheap wine, tasting notes and cooking with wine The World of Wine – May 2021 … END_OF_DOCUMENT_TOKEN_TO_BE_REPLACED

How to visit Napa Valley on a Budget. In this video Carson and I explain a few ways to enjoy Napa on the cheap. Tip and advice about how to visit Napa … END_OF_DOCUMENT_TOKEN_TO_BE_REPLACED

Home Videos Get To Know Argentina Wine | Wine Folly If you love Malbec, Argentina is your ultimate wine region. But that’s not … END_OF_DOCUMENT_TOKEN_TO_BE_REPLACED