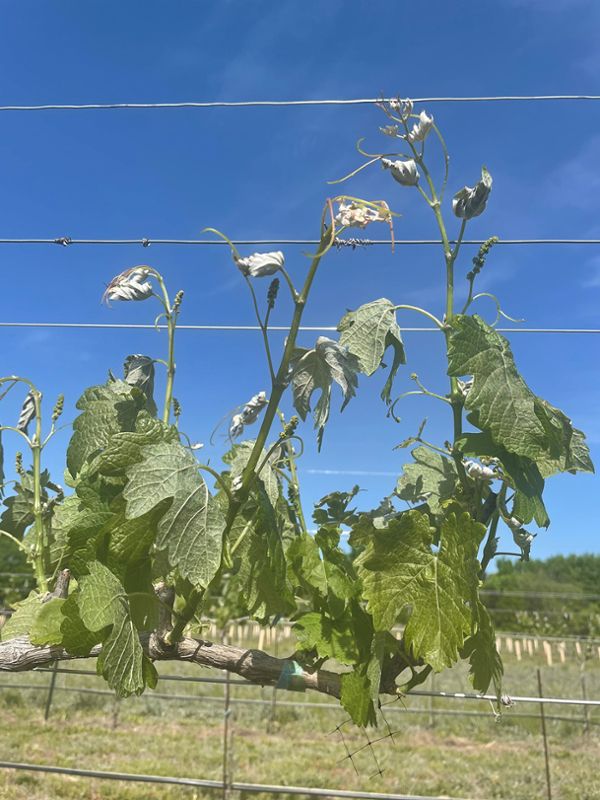 By the third week in April in “normal” years, vineyards in North Texas and the High Plains regions are well on their way to producing a large percentage of the grapes grown in Texas. Some vines would be in bloom, others would be beginning to set clusters, and the threat of frost would be in the distant past. However, 2021 has proved to be a challenging year for Texas grape growers. The most recent surprise from Mother Nature was a historically late freeze that occurred on the night of April 20-21 in North Texas and the High Plains.

The first weather challenge to hit Texas in 2021 began on February 9, when cold temperatures descended on all of Texas, from the Gulf Coast region to the northern-most parts of the state. That Winter freeze event lasted until February 17. The cold temperatures were the equivalent of a cold Spring frost for the Gulf Coast region as vines had started to set buds there and in the Rio Grande River valley had already had bud break. In West Texas and the High Plains, grapes were fully dormant, and the cold was more of a mid- to late-Winter freeze. Farther to the east and south, some vines were closer to bud break and therefore had more potential for cold temperature damage.

According to the National Weather Service, the average date of the last freeze event in the Dallas-Fort Worth area is March 12. The date of the latest freeze recorded was a tie: on April 13, 1957, temperatures dropped to 30° F and on April 13, 1997 temperatures went to 32° F. In the early morning hours of April 21, 2021 temperatures north and west of Dallas-Fort Worth region hit lows between 26° F and 33° F, according to Michael Cook, viticulture extension specialist at Texas A&M Agrilife in the North Texas region.

Cook told Wine Business Monthly that vineyards in North Texas and the High Plains had “a perfect scenario for radiational freeze. The soil was cool at ground level, and by midnight, it was freezing.” On the morning of April 21, every grower he talked to had had a significant layer of frost on the leaves of their grapevines. He noted that many vineyards have some frost events in the early Spring, but not this late in April, and during the night of April 20-21, many growers ran frost fans and some were burning hay bales in an attempt to raise temperatures enough to prevent major damage to the vines.

Messina Hof Wine Cellars, whose main winery is in Bryan, Texas, has 800 acres of vineyard (according to Wines Vines Analytics), with most of their acres in the High Plains region. Paul M. Bonarrigo, Messina Hof’s CEO and head winemaker, reported to Wine Business Monthly that he had talked on the morning of April 21 with approximately 50% of the grape growers who manage their vineyards in that region. Only one vineyardist told him that temperatures had been below 30° F, and other vineyards were in the 30° to 31° F range. Many of the growers ran fans during the night. Before the temperature drop, most of the vines were through budbreak but not quite to flowering. Bonarrigo said that while there may be some loss of fruit, hopefully it won’t be catastrophic.

Dr. Justin Scheiner, assistant professor of viticulture and extension specialist at Texas A&M Agrilife, noted that vineyards will vary in the degree of damage they have, depending on the vineyard location, the varieties grown, the age of the vines, the presence or lack of fans, and the extent of the winter damage suffered in February. Most vines had broken buds, many had clusters out, and some were in bloom, so the potential for damage does exist.

According to Cook, Texas A&M Agrilife Extension “will be offering multiple hands-on programs across the state in response to vine injury witnessed in winter and spring.”

Home Videos The WORLD of WINE – Wine News. Cheap wine, tasting notes and cooking with wine The World of Wine – May 2021 … END_OF_DOCUMENT_TOKEN_TO_BE_REPLACED

How to visit Napa Valley on a Budget. In this video Carson and I explain a few ways to enjoy Napa on the cheap. Tip and advice about how to visit Napa … END_OF_DOCUMENT_TOKEN_TO_BE_REPLACED

Home Videos Get To Know Argentina Wine | Wine Folly If you love Malbec, Argentina is your ultimate wine region. But that’s not … END_OF_DOCUMENT_TOKEN_TO_BE_REPLACED