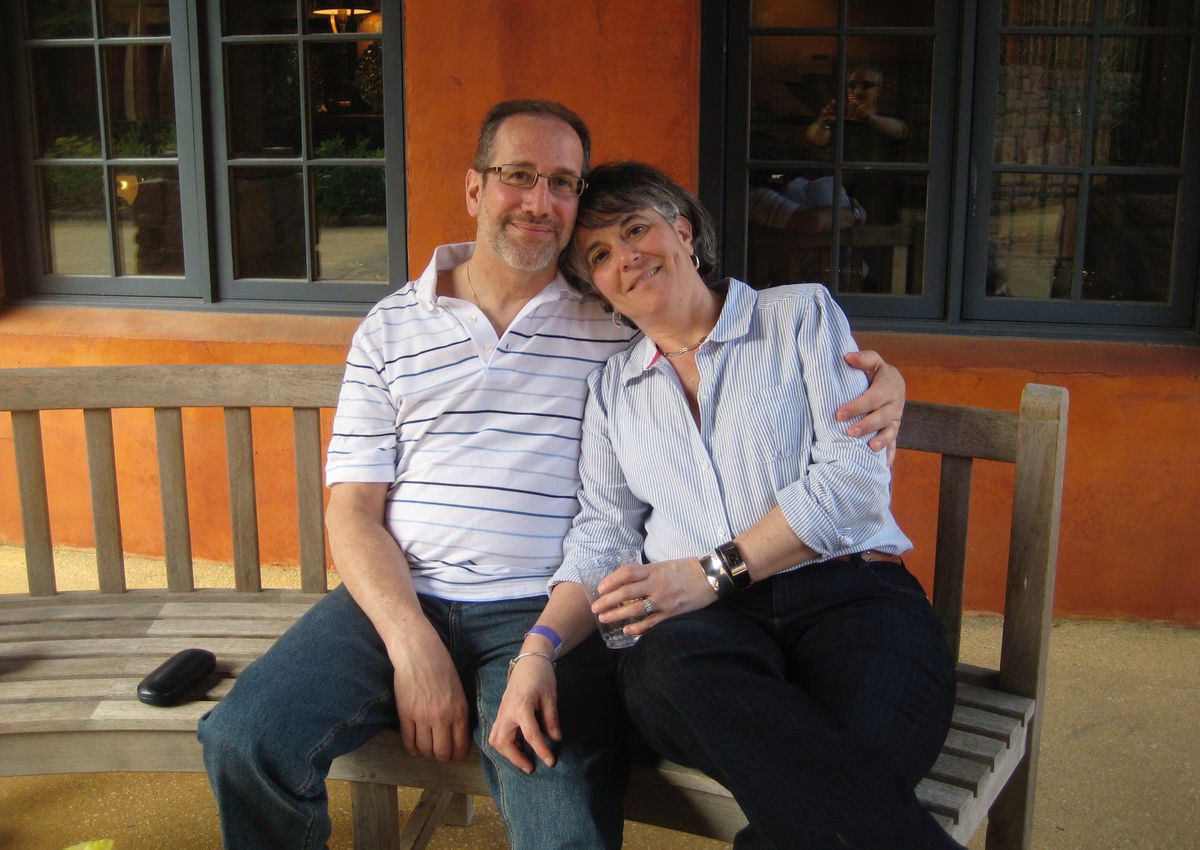 Stephen had not replied to her dating website message, but Randi wasn’t ready to give up just yet.

The majority of men she had met — even through a Jewish site — were not so observant. This man was a cantor. Surely, someone who professionally sang at synagogue would adhere tightly to his faith. Based on his profile, they had much more in common, too. It seemed worth a little risk.

“I figured there couldn’t be that many Stephens with a ‘ph’ who were cantors in this area,” Randi recalled. “My sister-in-law and I did some snooping online, and we found him.”

Stephen had received Randi’s dating site message but, even though he had put himself out there with a profile, he wasn’t really ready to date.

About 10 days later, he received her second message — on his work email. “I am not a stalker,” Randi wrote. “I’m just an observant Jewish woman who is interested in meeting someone like myself.”

Get the news you need to start your day

Stephen was not freaked out or put off by the email, but he didn’t respond to it, either.

Randi was disappointed. Consider the coincidences: They had married their previous spouses the same year, divorced them the same year after nearly 20 years of marriage, and had been single for about two years. Stephen has four children: son Dana, daughter Adina, son Adam, and daughter Melanie. Randi’s children mirror them in age and gender: stepson Adam, daughter Marti, son Josh, and daughter Abbe. Randi’s older stepson, Seth, died in 2008.

Her strong feeling that their meeting was bashert — meant to be, in Yiddish — led Randi to take more chances still: “Shabbat Shalom,” she wrote on several Friday nights.

Stephen, too, had noticed all that he and Randi had in common. About a month after her first email arrived, he thought he might be ready to do more than window-shop. He wrote back. They made plans to meet for dinner one summer day in 2009.

Stephen, who is now 67, lived in Horsham. Randi, now 64, lived in Cherry Hill but works in Philadelphia managing the OB-GYN residents office at Einstein Medical Center. She was nearly at the Jenkintown restaurant when she received news of a family emergency. “It’s nice to meet you, Stephen,” she told him in the restaurant lobby, “but this is the quickest first date you’re ever going to have.”

She was impressed when he called to check on things later that night. Their second first date was one week later and two doors down. “The conversation was very easy,” Stephen remembers. “I was able to be very open with her.”

They talked about their children, their values, and their similar upbringings in working-class families. A few more dates followed, then Stephen stopped contacting her, he says.

After some weeks of silence, Randi emailed to ask why. “I don’t know, maybe I’m not ready,” he said. “OK,” she wrote back. “Goodbye. Good luck.”

In March 2010, Randi’s father died. His shiva period had just ended, but Randi’s sister-in-law was being honored by a Jewish education association, and it was too important to miss. She walked into the Cherry Hill synagogue and there was Stephen, near the door. She wasn’t sure he meant it when he said it was so nice to see her, but Stephen surely did.

“We had such a nice conversation, and I thought she looked really beautiful,” he said. A week later, Stephen emailed Randi: “I can’t seem to find your phone number. Would you send it to me?”

After a month of phone calls, they planned a third first-date: lunch. That morning, Randi was scheduled to have some precancerous cells removed from her nose. “Just to let you know, I may have a bandage,” she told him. “I may look funny.”

Randi saw Stephen with a menu in front of his face. As she got closer, he lowered it, revealing a red clown nose he wore to make her laugh and put her at ease about her bandage. It worked.

As she waited for Stephen to pick her up for their next outing, a wine tasting and music in Chadds Ford, Randi almost wished they had not reconnected; odds seemed high that she was wasting her time on someone who wasn’t ready for a relationship. But then they were sipping, and listening to bluegrass, and her optimism returned. During a break in the music, each said they had a question for the other, which turned out to be the same question. Each had purchased two tickets to see Carole King and James Taylor and wanted the other to go. They were amazed, then delighted — the tickets were for different nights.

Not long after, Stephen had vocal cord surgery, a very serious endeavor for a cantor. He asked Randi to go to the pre-op appointment with him. One of the forms asked for an emergency contact. She was watching over his shoulder as he wrote her name, then identified her as his significant other.

“She told me later she did a little fist pump when she saw that,” he said with a laugh.

“It was the first time I felt confident that we really had something,” she said.

That Thanksgiving, they gathered their children to meet one another.

In January 2011, the two stayed at a Lancaster County bed and breakfast. The usually romantic Italian restaurant Stephen had picked was packed with high school volleyball players. The maitre d’ suggested its sister location, which offered quiet and delicious food, but also a TV blaring football and a bartender so friendly he sat with them.

Back at the B&B, Stephen knelt on both knees and took out a ring. “I started to cry. Between sobs, I asked her, ‘Will you marry me?’ ” he asked.

They embraced, and then Stephen started crying again. “What is it?” Randi asked gently. “This was my mother’s ring,” he replied. They sobbed and held each other.

Their traditional ceremony was held at Stephen’s former synagogue in Dresher on Dec. 30, 2011. His close friend, the cantor emeritus, served as their cantor. After the ceremony, Stephen asked Randi to look inside her wedding band. They had purchased their bands on a trip to Israel and she already knew they were inscribed with “I am my beloved’s and my beloved is mine” in Hebrew. But there were new words: “Second Chances.” At their brunch reception for 25, Stephen pulled out his guitar and sang a song with that title, which he had written to surprise Randi.

The couple live in Lower Gwynedd with their rescue cat, Moe. Randi continues her role at Einstein. Stephen is now cantor at Melrose B’nai Israel Emanu-El in Elkins Park.

“He is the kindest, sweetest, most supportive person that I’ve ever been privileged to spend time with,” said Randi. “I cannot say enough about how important it is not just to me, but to my children, that he’s here. They love him because he makes me happy, but they also love him for who he is.”

Stephen loves that Randi is supportive and caring and loving. “Even when there’s something she needs to criticize, she does it in a very positive, nurturing way,” he said.

Home Videos The WORLD of WINE – Wine News. Cheap wine, tasting notes and cooking with wine The World of Wine – May 2021 … END_OF_DOCUMENT_TOKEN_TO_BE_REPLACED

How to visit Napa Valley on a Budget. In this video Carson and I explain a few ways to enjoy Napa on the cheap. Tip and advice about how to visit Napa … END_OF_DOCUMENT_TOKEN_TO_BE_REPLACED

Home Videos Get To Know Argentina Wine | Wine Folly If you love Malbec, Argentina is your ultimate wine region. But that’s not … END_OF_DOCUMENT_TOKEN_TO_BE_REPLACED