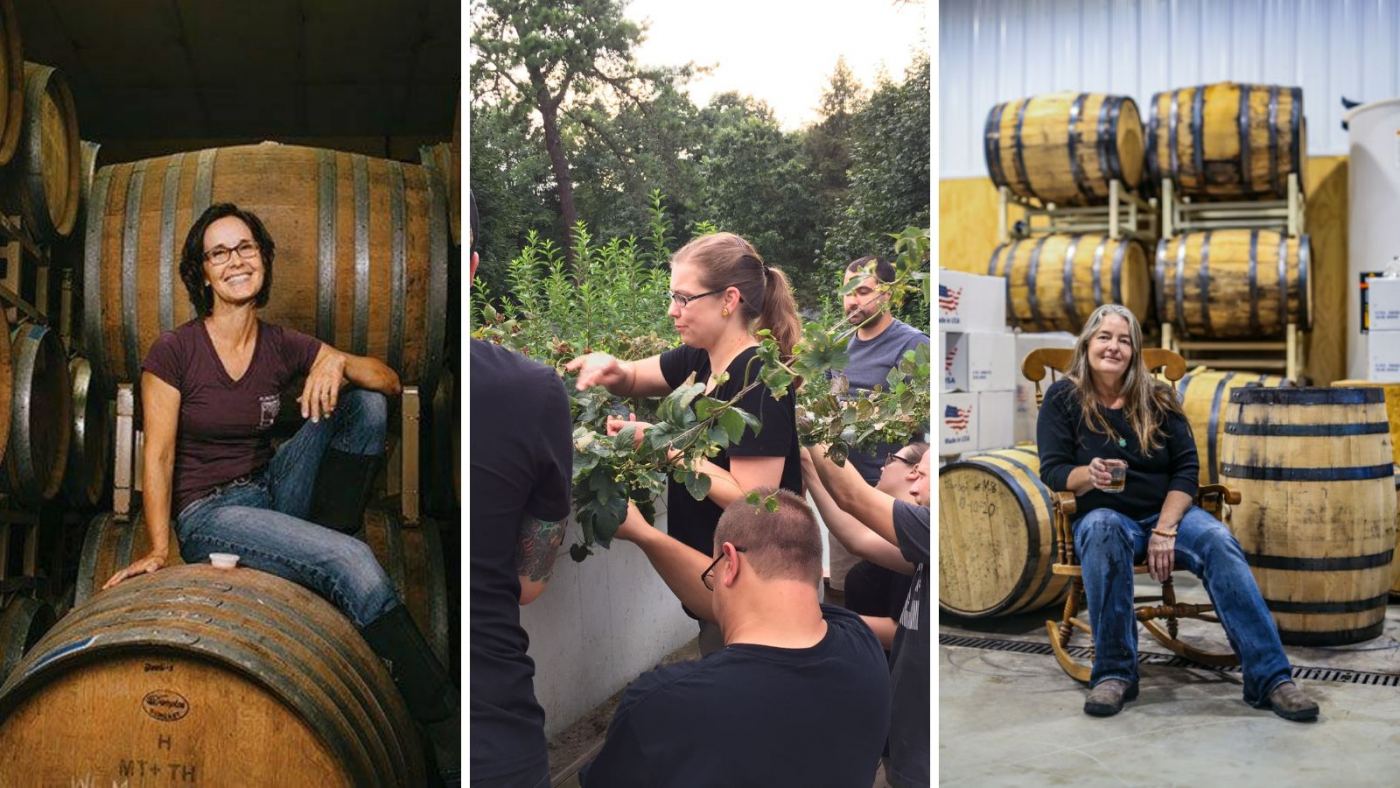 With an advanced degree in biochemistry from Cornell, Heide Hassing, brewer and co-owner of Angry Erik Brewing in Hampton Township, knows a thing or two about male-dominated fields. While the concept of STEM was not around when she was growing up, Hassing is quick to point out that brewing, at one time, was a woman’s chore in the household, but at her brewery, it is a combination of her education, work experience and passion.

Although not a chore they embarked on in their beermaking journey, Hassing and her husband Erik (co-owner and not especially angry) started homebrewing in their small New York apartment in 1998 while she was in graduate school. A stint in restaurant management and culinary school helped her add some creative flair to the scientific process of brewing. Today, she is more focused on beer recipe development, and its reflected in the flavor profiles — many of the Angry Erik brews are made to accompany food. “I believe my experiences have allowed me to add art to science, and beer is science!” said Hassing enthusiastically.

When asked if customers think her husband or any other male employee is the head brewer, she said it does happen at times and can be frustrating, but their regulars know. Since opening seven years ago, they have employed more women than men, and she believes more opportunities will continue to open for women in brewing.

“Automation is creating a more level playing field for women,” she said, and that is after all, yet another application of science. At Angry Erik, all that science has helped make for a line of tasty beers and a great environment.

Julianne Donnini, on the other hand, did not apply her previous professional background to developing her current skillset, but she, too, has been largely self-taught. Co-owner of Auburn Road Vineyards in Pilesgrove with her husband Scott, she primarily handles the “back of the house” responsibilities, or the winemaking. The operations were launched in 2003 when Donnini traded in her legal career for farm life. Together, they have created a warm and welcoming atmosphere that flows comfortably from the outdoor setting into the tasting room.

“Art really permeate all aspects of our business, and that includes the art of winemaking,” Donnini said. That is evident in the design of the labels, the indoor and outdoor space, and the emphasis on music, too. Customers also see it in the wines as she continues to experiment with lower intervention winemaking techniques and different styles, like petillant naturel sparkling wines. “I’m really motivated by our customers’ energy, how they react to what we are doing here.”

Donnini finds inspiration and affirmation in her relationships with other female professionals in and around the wine trade. She is hoping to find time to create kinship in a more organized manner and relishes opportunities to mentor those newer to the industry. What she may not fully know, though, is that she has had a profound influence on Kerry Breen.

Kerry Breen is known as ‘The Mother of Spirits’ in her area, and she relishes bringing her maternal spirit to her distillery. Photo courtesy of Independent Spirits Distilling

Breen is the co-owner and distiller at Independent Spirits Distilling in Woolwich Township. She has known Jules Donnini since their 17-year-old sons were in pre-K together. As a full-time mom, while trying to figure out what to do next, she found inspiration in her friend’s business. “Watching them build Auburn Road gave me the courage to one day launch my business,” Breen said. But with a good number of wineries in the area, she wanted to try something different.

After methodically researching options, it was distilling. Not just any type of operation but a true grain to bottle operation. She matter-of-factly added, “it was not easy to do.” Today, she is known as “The Mother of Spirits” in her area, and she relishes bringing her maternal spirit to her distillery.

Breen’s business plan entailed purchasing a 10-acre farm to house the distilling operations and tasting room, with the hope to grow her own grains someday, but also to work closely with area growers to source as many ingredients as possible.

One such grower, and another important influence, has been Hillary Barile, a fifth-generation farmer and manager of Rabbit Hill Farms in Shiloh. Rabbit Hill, seeing the growing number of distilleries and breweries in the state, started not just growing specific grains to meet the new and rising demand but setting up a malting operation as well to provide a more finished product option. “Hillary has helped me get to the heart of the matter with my spirits production,” Breen said.

With the successes and outreach efforts of women already paving the way in craft wine, beer and spirits communities, this new history should lead to a bright future. Photo courtesy of Auburn Road Vineyards

For small artisan producers, getting the word out to more people across the state is critical — now more than ever. While these women are creating a new history in the making in the state, others are going about writing that history as it happens. Alexis Degan (@alexisdegan), former executive director of the New Jersey Brewers Association, recently launched “Alexis Drinks” on social media, highlighting the best of the state’s producers with a focus on beer. Also look for Robin Shreeves (@rshreeves) and Shelby Vittek (@bigboldreds) in your web explorations. Both have written extensively and passionately about much of what the state craft makers have to offer.

These are not the only women working in the New Jersey craft wine, beer and spirits communities. Certainly, there should be more than there are, though. With the successes and outreach efforts of those already paving the way, this new history should lead to a bright future.

Hank Zona writes regularly about wine, spirits and a range of other topics such as food and culture. He also has been running wine and spirits events of all sorts for over a decade.

This article originally appeared in the Spring 2021 issue of Jersey’s Best. Subscribe here for in-depth access to everything that makes the Garden State great.

Home Videos The WORLD of WINE – Wine News. Cheap wine, tasting notes and cooking with wine The World of Wine – May 2021 … END_OF_DOCUMENT_TOKEN_TO_BE_REPLACED

How to visit Napa Valley on a Budget. In this video Carson and I explain a few ways to enjoy Napa on the cheap. Tip and advice about how to visit Napa … END_OF_DOCUMENT_TOKEN_TO_BE_REPLACED

Home Videos Get To Know Argentina Wine | Wine Folly If you love Malbec, Argentina is your ultimate wine region. But that’s not … END_OF_DOCUMENT_TOKEN_TO_BE_REPLACED