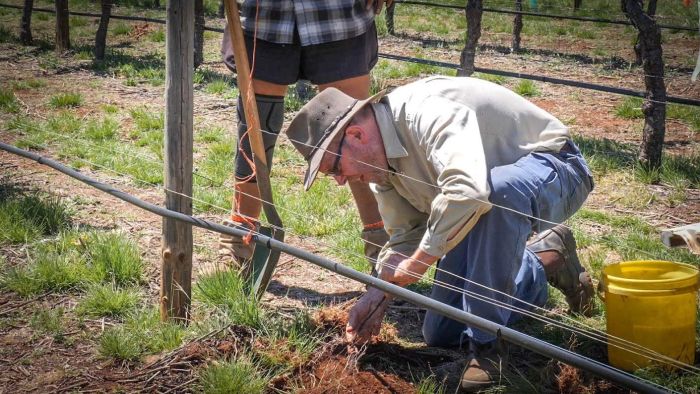 Mark Kirkby has been growing grapes and making wine for more than 20 years, but he is looking much further ahead than that as he plans for the future.

He specialises in rare, mostly Mediterranean emerging varieties at Tingha in the NSW New England region, and is always adapting and experimenting, anticipating changes to the climate.

In February 2019, just hours before the season’s first grapes were to be cut, fire tore through, devastating the vineyard.

But as replanting began so did the experimentation.

A report from the University of Tasmania titled Climate Atlas has examined the impact climate change could have on grape growing regions across the country.

According to the report, the New England region will experience higher temperatures and more rainfall, leading to more extreme heat days and less extreme cold days.

Mr Kirkby, who is also the president of the New England Wine Industry Association, said the report was a valuable one for the industry and will lead to substantial changes.

The report forecasts average growing season rainfall will increase by about 90 millimetres by the end of this century and the mean temperature will increase to 21.6 degrees Celsius.

“That means that’s things are going to speed up in the vineyard,” Mr Kirkby said.

“Because these vines ripen as a function of the heat degree days that are available to them, by 2100 you’ll have varieties that would ripen at the end of February-early March ripening at the end of December-early January.

“The ones that we grow now will ripen so early that it’ll shift our ripening period right into the middle of our highest rainfall [January].”

Mr Kirkby said the region receives nearly double the March rainfall in January, and for harvest to come forward would bring issues around disease in the vines.

“We’re continuing to experiment with new varieties, and when we make those decisions we’ll be thinking more about when those particular varieties will ripen,” he said.

Water the next woe

The Climate Atlas also predicts the annual aridity index will drop, meaning a drier climate for the New England in decades to come.

Mr Kirkby said water security will be the next issue for vignerons, with little water available for irrigation in the New England.

“As we proceed through this century, we’re going to have a greater deficit of rainfall so it’s going to become more arid.

“There’s going to be more call on supplementary irrigation for vineyards and that’s certainly an issue because water resources are not New England’s strong point.”

Home Videos The WORLD of WINE – Wine News. Cheap wine, tasting notes and cooking with wine The World of Wine – May 2021 … END_OF_DOCUMENT_TOKEN_TO_BE_REPLACED

How to visit Napa Valley on a Budget. In this video Carson and I explain a few ways to enjoy Napa on the cheap. Tip and advice about how to visit Napa … END_OF_DOCUMENT_TOKEN_TO_BE_REPLACED

Home Videos Get To Know Argentina Wine | Wine Folly If you love Malbec, Argentina is your ultimate wine region. But that’s not … END_OF_DOCUMENT_TOKEN_TO_BE_REPLACED