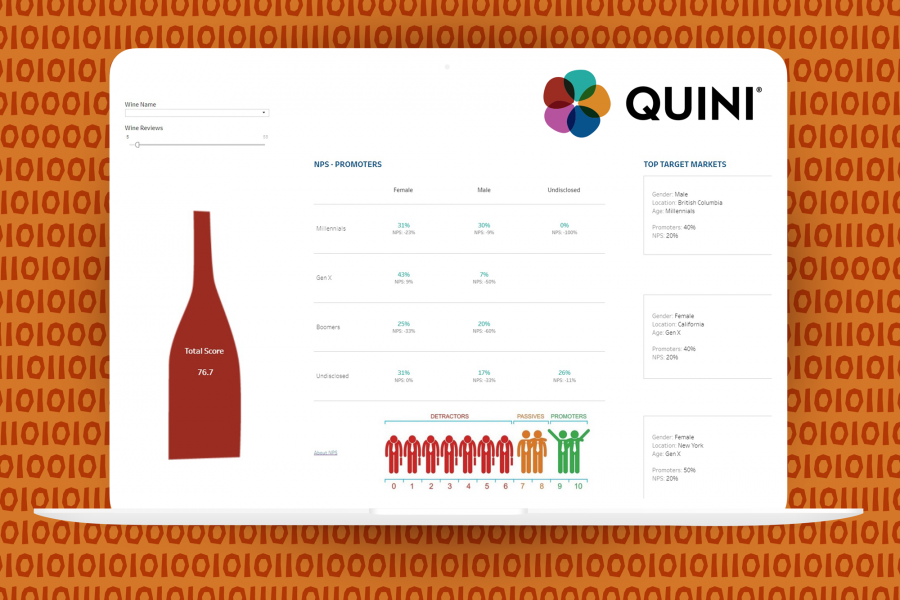 Instant view of NPS within the QUINI DATA analytics interface is designed to help wine marketers to instantly identify and prioritize optimal target audiences and geographic markets for a wine product, based on consumer loyalty indications captured using Quini.

The underlying recommendation engine also automatically suggests ideal geographic and demographic targets for a particular wine, based on a combination of consumer loyalty indicators, drinker age categories and taster location, down to a city level.

The new algorithm simultaneously identifies detractors. Audiences that are more likely to negatively impact the brand and business. Alerting wineries early to potential risk gives the executive suite an opportunity to re-examine decisions and steer away from unnecessary, costly pitfalls.

“The growing interest in consumer sensory data to support decisions early in a wine product’s journey is a significant leap for an industry known as being market driving rather than market driven,” added Noujeim.

“Averting a commercial miss is a critical goal every winery must pro-actively pursue. It can mean saving tens or hundreds of thousands of dollars in potential loss for a winery. Even up to a million dollars or more for the largest wine producers,” concluded Noujeim.

A side by side competitive benchmark of NPS scores can also be used by marketing teams to enhance product sheets with real, third party verified consumer data to better support sales teams and objectives on the road.

Access to NPS is now open to all QUINI DATA Gold annual subscribers, at no added charge.

Net Promoter or Net Promoter Score (NPS) is the percentage of customers rating their likelihood to recommend a company, a product, or a service to a friend or colleague as 9 or 10 (“Promoters”) minus the percentage rating this at 6 or below (“Detractors”) on a scale from 0 to 10. Respondents who provide a score of 7 or 8 are referred to as “Passives” and do indeed enter into the overall percentage calculation. NPS is a management tool used as a measure of customer loyalty and has been shown to correlate with revenue growth relative to competitors. NPS has been widely adopted by Fortune 500 companies and other organizations.

The NPS metric was developed by, and is a registered trademark of Fred Reichheld, Bain & Company and Satmetrix.

Quini is the leader in near real-time wine sensory data and technology solutions. Privately held, Quini is headquartered in Vancouver, BC. Quini a Nielsen Connected Partner. The Quini project is co-funded by CMF (Canada Media Fund). The QUINI DATA platform is co-funded by the National Research Council through the IRAP program. Quini’s investor group includes OKR Financial (www.okrfinancial.com) and private investors.

EIN Presswire’s priority is source transparency. We do not allow opaque clients, and our editors try to be careful about weeding out false and misleading content.
As a user, if you see something we have missed, please do bring it to our attention. Your help is welcome. EIN Presswire, Everyone’s Internet News Presswire™,
tries to define some of the boundaries that are reasonable in today’s world. Please see our
Editorial Guidelines
for more information.

Home Videos The WORLD of WINE – Wine News. Cheap wine, tasting notes and cooking with wine The World of Wine – May 2021 … END_OF_DOCUMENT_TOKEN_TO_BE_REPLACED

How to visit Napa Valley on a Budget. In this video Carson and I explain a few ways to enjoy Napa on the cheap. Tip and advice about how to visit Napa … END_OF_DOCUMENT_TOKEN_TO_BE_REPLACED

Home Videos Get To Know Argentina Wine | Wine Folly If you love Malbec, Argentina is your ultimate wine region. But that’s not … END_OF_DOCUMENT_TOKEN_TO_BE_REPLACED