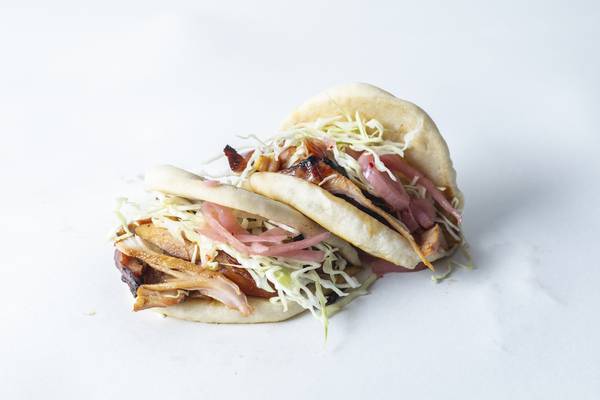 David Chang’s Bāng Bar is set to open on April 1 at the Block 16 Urban Food Hall on the second level at the Cosmopolitan. The first West Coast location of the New York City favorite will serve grab-and-go items, as well as its signature “street meat” dishes of flatbread-wrapped, spit-roasted spicy pork, teriyaki chicken and spicy eggplant. Sides include stewed chickpeas, pickled shishito peppers and creamy bean salad, and yuzu lemonade and blood orange negronis top the beverage offerings. Also at Cosmo—and as previously reported in the Sun—the Wicked Spoon Buffet is set to reopen on March 25, serving breakfast from 8 a.m. until 11 a.m. and lunch from 11 a.m. until 3 p.m. Thursday through Sunday. A holiday brunch menu is planned for Easter Sunday on April 4.

The Wynn Master Class Series continues with two food-oriented events this month. Decorate Cakes Like a Pro with master cake designer Flora Aghababyan is set for March 19 at 2 p.m., and SW Steakhouse Cooking at Home with executive chef David Walzog will be held on March 25 at noon. For more information or reservations, call 702-770-7070 or email [email protected]

Ferraro’s Italian Restaurant & Wine Bar, which is extending dinner service hours this week to include Tuesdays, will present its next Taste & Learn event on March 27 at 6 p.m. featuring Tuscany’s Antinori winery. The ticket price for the wine tasting with Italian small plates is $75 and reservations can be made by calling 702-364-5300. Ferraro’s is now open for dinner from 5 to 11 p.m. Tuesday through Sunday and is open until 1 a.m. Friday and Saturday.

In case you missed it, Guy Fieri’s new delivery only virtual restaurant Flavortown Kitchen is dishing it up in Las Vegas and the full menu can be viewed at guysflavortownkitchen.com. Highlights include cheesesteak egg rolls, bourbon brown sugar BBQ chicken wings, the infamous Bacon Mac N Cheese Burger and Choco Whiskey Cheesecake. Most third-party delivery apps including Grubhub, DoorDash, UberEats and Postmates are providing service for this new project.

A new See’s Candies location at the Montecito Marketplace on North Durango Drive will celebrate its grand opening March 26 through April 2. All in-store shoppers that week will receive a gift with purchase of $25 or more and all customers can enter for a chance to win a $25 gift card.

An award-winning writer who has been documenting life in Las Vegas for more than 20 years, Brock Radke covers entertainment …

Home Videos The WORLD of WINE – Wine News. Cheap wine, tasting notes and cooking with wine The World of Wine – May 2021 … END_OF_DOCUMENT_TOKEN_TO_BE_REPLACED

How to visit Napa Valley on a Budget. In this video Carson and I explain a few ways to enjoy Napa on the cheap. Tip and advice about how to visit Napa … END_OF_DOCUMENT_TOKEN_TO_BE_REPLACED

Home Videos Get To Know Argentina Wine | Wine Folly If you love Malbec, Argentina is your ultimate wine region. But that’s not … END_OF_DOCUMENT_TOKEN_TO_BE_REPLACED