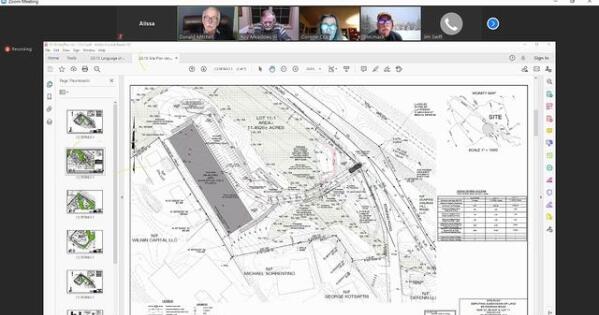 On January 21, the Planning and Zoning Commission (P&Z) conducted public hearings for permitted uses at vineyards in residential zones and the 3 Edmond Road subdivision during its meeting over Zoom.

More than 40 people virtually attended the meeting, including commissioners, applicant representatives, and members of the public.

A second P&Z public hearing was conducted for Application 20.14 about a text amendment to the zoning regulations regarding permitted accessory uses at vineyards in residential zones.

Proposed uses include having a food truck on site, hosting private gatherings, partnering with local businesses to offer food and wine pairings, having art installations for patrons to purchase, and having a farmers market.

The application was presented by husband and wife Ardian Llomi and Neviana Zhgaba, owners of Aquila’s Nest Vineyards at 56 Pole Bridge Road.

After the first public hearing for the application, Land Use Agency Director of Planning George Benson took feedback he gathered from the P&Z and made amendments to a draft proposal he had been working on regarding this topic. He presented it at the meeting and verbalized that his edits included listing certain uses specifically as “indoor” activities.

Benson added that he also created a Special Event Permit for bigger events like weddings and corporate gatherings.

Llomi and Zhgaba reviewed Benson’s draft prior to the meeting and made their own edits to it (in red), then presented that newest version of the text amendment to the commission.

Zhgaba started off by saying that the primary goal of the business is the vineyard, and that they are planning more acres to expand it. All the requested uses they are putting forth are secondary that “make the wine tasting experience more interesting and more new people come over.”

While going over each proposed use, she emphasized that while some of the events could be done indoors in the winery, as Benson’s updates indicated, others can be done outdoors with nice weather.

She explained that many people coming to Aquila’s Nest Vineyards are there because they want to enjoy the outdoors and the scenery. She also noted that these uses are intended for small events and not necessarily to be done frequently.

P&Z member Corinne Cox said she is concerned about noise of outdoor events with the vineyard being in a residential zone. She said she would want receptions be held indoors and would prefer the vineyard not have farmers markets on site.

Benson added that the reason he rewrote uses as “indoors” was to control the number of people and parking.

“It isn’t just for this winery, it’s for other wineries across town that might come up… it’s not that we don’t trust [the applicant] to keep things small and intimate. We might get someone else coming in that does not follow what they’ve said. We need some type of control,” Benson said.

He added that vineyards in Newtown are only allowed in residential zones.

After some discussion it was noted by commissioners that the application draft was going in the right direction.

Benson said he would like to continue working on it with the applicants.

Llomi agreed and said, “We want everyone to be happy and on the same page.”

The commission voted and approved to continue the public hearing to the next P&Z meeting on February 4 over Zoom.

The first public hearing was conducted for Application 20.16 by Heather Kimball of 5K Enterprises, Inc for a two-lot subdivision at 3 Edmond Road.

Representing the applicant were John Mack and Charlie Spath, both of Stuart Somers Company in Southbury.

Mack explained that the parcel of land is about 22 acres in an industrial zone with two existing buildings located on the property. They are looking to divide the property roughly in half.

He gave a brief history of Edmond Road for context and explained how, when the road was realigned a few years ago, “it took some property away from this parcel and other parcels near Church Hill Road.”

A site plan was shown on the screen where he pointed out a conceptual building and parking area of what could be built. The applicant, however, is seeking just a subdivision approval and not proposing the possible property development that was displayed.

P&Z Chair Don Mitchell inquired about the property’s previous approval for five buildings, only some of which are constructed, and if reducing the size of the lot would impact the ability to create the remaining approved buildings.

Mack said it would not be an issue.

Mitchell also brought up that an “earth materials” business was on the property and that he would like their access to be off Edmond Road and not through the Reverie Brewing Company property.

Mack said the operation is on neighboring property.

“There’s a huge pile of crushed stone, probably that extends maybe 100 feet into this property behind the brewery,” Mitchell said.

Mack said if it is so, it is not done legally and that he will look into it.

Spath added that he was on the proposed subdivision property roughly six months ago and did not see the business on the property, but said if it is the case, it likely happened within the last few weeks.

Mitchell encouraged the commission members to check out the site.

Benson asked Mitchell to discuss the open space particulars for this application, as he may not be able to attend the next P&Z meeting.

Mitchell explained, “For the commission’s benefit, we want to see open space for approval of a subdivision. What has happened here, over these past years, is that in order for the town to get the realignment of Edmond Road, there was a series of land swaps and sales and so forth — a number of them involving the 5K [Enterprises, Inc] property. And part of that resulted in a donation of a substantial area of open space on this property, but it wasn’t specifically tied into a subdivision application.”

He said that in being equitable, the subdivision could be given a credit for the open space that it had already given the town.

Benson added, “It was crucial — the land we got to build the new Edmond Road. They agreed to it with kind of a handshake with Land Use that we would work out the details later, because they didn’t know what they were doing with this property either, and we needed the land right away, because of the state money we were getting.”

He went on to say that he feels the property owners have given enough land to the town and should not require more open space from the subdivision application.

The commission voted and approved to continue the public hearing to the next P&Z meeting on February 4 over Zoom.

To learn more about the Planning and Zoning Commission, visit newtown-ct.gov/planning-zoning-commission. Call the P&Z office at 203-270-4276 for information on participating in meetings virtually.

John Mack, of Stuart Somers Company, discusses the site plan for a proposed two-lot subdivision at 3 Edmond Road during the Planning and Zoning Commission’s public hearing for Application 20.16 by Heather Kimball of 5K Enterprises on January 21.

Home Videos The WORLD of WINE – Wine News. Cheap wine, tasting notes and cooking with wine The World of Wine – May 2021 … END_OF_DOCUMENT_TOKEN_TO_BE_REPLACED

How to visit Napa Valley on a Budget. In this video Carson and I explain a few ways to enjoy Napa on the cheap. Tip and advice about how to visit Napa … END_OF_DOCUMENT_TOKEN_TO_BE_REPLACED

Home Videos Get To Know Argentina Wine | Wine Folly If you love Malbec, Argentina is your ultimate wine region. But that’s not … END_OF_DOCUMENT_TOKEN_TO_BE_REPLACED