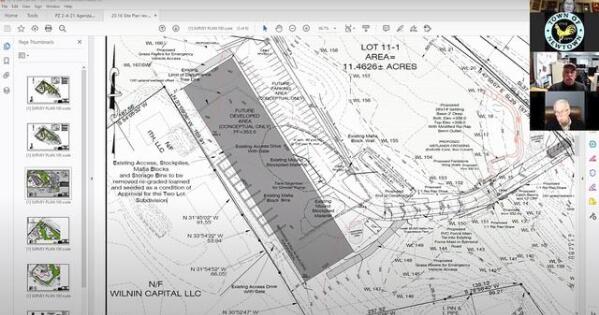 The Planning and Zoning Commission (P&Z) met over Zoom on February 4 to continue public hearings for applications concerning Aquila’s Nest Vineyards and a subdivision at 3 Edmond Road.

The third and final public hearing took place for Application 20.14 about a text amendment to the zoning regulations regarding allowed accessory uses at vineyards in residential zones and temporary accessory uses that require a Special Event Permit issued by the Land Use Agency.

Proposed uses that were listed included having a food truck on site, hosting private gatherings, recreational activities such as partnering with local businesses to offer food and wine pairings, having art installations for patrons to purchase, and having farmers markets.

The application was presented by husband and wife Ardian Llomi and Neviana Zhgaba, owners of Aquila’s Nest Vineyards at 56 Pole Bridge Road.

P&Z Chair Don Mitchell started off the discussion by stating that recent editorial revisions to the proposed text amendment were submitted for consideration.

“As I indicated previously, I am in favor of these kinds of uses,” Mitchell said. “I was concerned more about regulation and enforcement.”

However, after “some long discussions” about his concerns with George Benson, director of planning for the Land Use Agency, he now feels assured they will be appropriately taken care of and that the Zoning Enforcement Officer (ZEO) will oversee details such as bathrooms and heating sources.

When the applicants were asked how they feel about the presented changes, Zhgaba stated, “We are good with the changes that George and the rest of the commission proposed.”

P&Z alternate member David Rosen asked how this version changed from the last one, to which Mitchell said there are more changes with syntax and that certain parts were moved to different sections.

“There are really no additional uses. In some previous iterations there was something about farmers markets, which is not in the current version,” Mitchell added.

P&Z member Corinne Cox asked if the activities listed in §3.01.431 (3) were for inside or outside uses, and Mitchell said it does not specify, so both would be allowed.

When public participation was opened on the application, Newtown resident Patrick Simms was the first to comment. He asked why it lists that outdoor events must end at 7 pm when other local events, such as football games, go past that time.

Mitchell responded, “I suppose between daylight savings time and eastern standard time they may seem arbitrary, but they are more of an enforcement mechanism… these are all in residential zones.”

He added that those are for special events that have a time limit, but that the accessory uses do not.

Newtown resident Diana Paproski also inquired if the 7 pm ending time would be up for discussion and proposed maybe it could be set to a later time, such as 9 pm.

Cox said she would support pushing the time back to 9 pm.

There was much discussion between the commission and public regarding day versus night events and weeknight versus weekend night events.

After hearing the feedback, Mitchell proposed an update to say, “Special events on Friday and Saturdays to end by 10 pm. All other days of the week, special events end by 9 pm.”

Commission members voiced that they were in favor of the time changes, and Zhgaba agreed that she liked the proposal.

The commission unanimously voted in favor for Application 20.14 as amended, and found it is consistent with the plan of conservation and development and the comprehensive plan. The approval will become effective February 27.

The second and final hearing for Application 20.16 by Heather Kimball of 5K Enterprises, Inc, for a two-lot subdivision of land at 3 Edmond Road took place at the meeting.

The applicant was represented by engineer John Mack, of Stuart Somers Company, LLC.

At the previous meeting, Mack explained that the approximately 22-acre parcel of land is in an industrial zone and has two existing buildings located on the property. The applicant is proposing to divide the property roughly in half.

During the first public hearing, Mitchell mentioned that he had seen what appeared to be piles of crushed stone from the neighboring “earth materials” business on the applicant’s property, to which Mack said he would look into it.

His findings were included in a new version of the site plan that he shared with the commission on February 4.

“We added that area of disturbance… showing there is concrete storage bins and piles of material in this area around the tree line,” Mack said.

He also pointed out a note that was made on one of the site plan sheets that read, “Existing access, stockpiles, mafia blocks, and storage bins to be removed, re-graded, loamed, and seeded as a condition of approval for the two-lot subdivision.”

The application was unanimously approved by the P&Z with the following conditions:

2. The lot pins shall be set according to the above-mentioned map and the Subdivision Regulations.

3. The applicant shall record on the Land Records the transfer of any real property as approved, such as road widening and open space.

4. The applicant/developer shall permanently field mark the open space prior to the issuance of a building permit to permit potential buyers to visually identify the area. The Conservation Commission or its agent shall specify the marker types and their locations.

5. A CD-ROM or digital map submission of the approved subdivision must be filed with the Land Use Agency.

The approval will become effective February 27.

To learn more about the Planning and Zoning Commission (P&Z), visit newtown-ct.gov/planning-zoning-commission. Call the P&Z office at 203-270-4276 for information on participating in meetings virtually.

John Mack, of Stuart Somers Company, discusses the revised site plan for Application 20.16’s proposed two-lot subdivision at 3 Edmond Road during the Planning and Zoning Commission’s public hearing on February 4. The site plan shows a conceptual building of what could be created in the future.

Home Videos The WORLD of WINE – Wine News. Cheap wine, tasting notes and cooking with wine The World of Wine – May 2021 … END_OF_DOCUMENT_TOKEN_TO_BE_REPLACED

How to visit Napa Valley on a Budget. In this video Carson and I explain a few ways to enjoy Napa on the cheap. Tip and advice about how to visit Napa … END_OF_DOCUMENT_TOKEN_TO_BE_REPLACED

Home Videos Get To Know Argentina Wine | Wine Folly If you love Malbec, Argentina is your ultimate wine region. But that’s not … END_OF_DOCUMENT_TOKEN_TO_BE_REPLACED