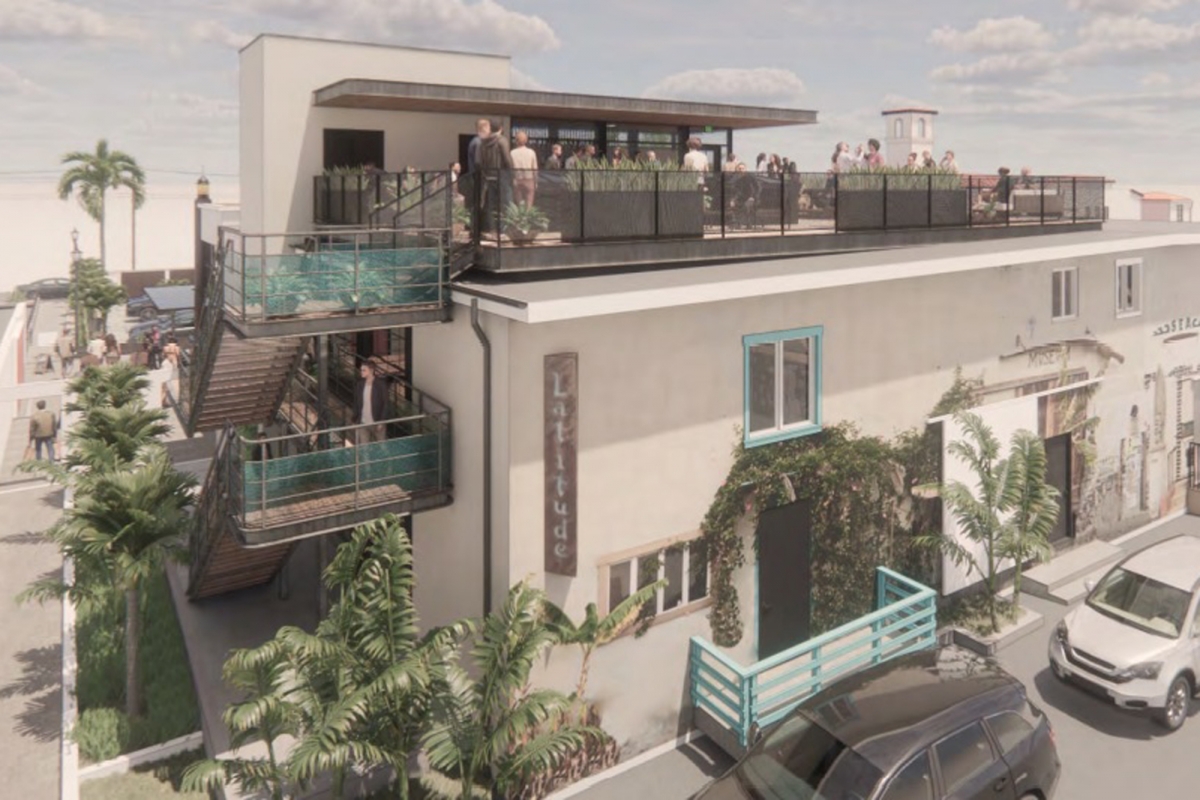 A proposed building for Santa Barbara’s Funk Zone has received positive feedback from the city’s Architectural Board of Review.

The project involves converting 1,643 square feet of warehouse space into a wine-tasting business, with a roof deck and bar. An elevator and a stairwell would take people to the top of the building, which would feature sweeping ocean views.

“We’re very excited about this project,” said Jill Johnson, owner of Funk N Love, a clothing and art store in the Funk Zone. “The rooftop vistas are going to be incredible and lend something incredibly new and innovative to the Funk Zone.

In addition, the property owner, Hannah Beachside LLC, wants to build a mechanical parking lift structure on the parking lot site. Overall, including the 22 spaces in the mechanical lift, the site would include 45 parking spaces.

The ABR gave the project — at 16.5 and 20 Helena St. and 11 Anacapa St. — mostly positive feedback with a vote of 6-0 on Monday. The project now heads to the Planning Commission.

A new building with a parking lift is proposed for the parking lot at 11 Anacapa St. in Santa Barbara. (DMHA rendering)

Among the only concerns about the project was the design of the rooftop deck and bar, which some of the board members felt was too modern.

“It’s sort of this mid-century, modern pavilion that just landed on top of this funky old building,” board president Kevin Moore said. “There is such a great opportunity to make something on top of this building that fits in really well and has materials similar to what we see here and has a little bit more Funk Zone flavor.”

Before the COVID-19 pandemic, the Funk Zone emerged as one of the city’s most prominent and promising experiential destinations. Restaurants, wineries and breweries have blossomed in recent years in the Funk Zone, a neighborhood roughly bounded by State and Garden streets between Highway 101 and the waterfront.

Moore acknowledged that the project has come a long way since its original form.

Commissioner David Black said he appreciated the building, its use of materials and the future opportunies for art.

“They have done a nice job, and it really contributes to the funkiness of the Funk Zone,” Black said.

Moore said the project was innovative.

“This project is inventive in its use of the car parking machine, opening up additional landscaping area and open space and making use of the rooftop space,” he said.

Board member Richard Six said he liked the parking building and that it was “quirky” with “artistic serendipity.”

Six said the view of the rooftop would be visible from Cabrillo Boulevard, so he urged a better screening of the bar’s overhang and encouraged a design that was older.

“I commend what you have done so far,” Six said, “but I still am uncomfortable with the modern expression of the roof elements and the deck screening.”

Home Videos The WORLD of WINE – Wine News. Cheap wine, tasting notes and cooking with wine The World of Wine – May 2021 … END_OF_DOCUMENT_TOKEN_TO_BE_REPLACED

How to visit Napa Valley on a Budget. In this video Carson and I explain a few ways to enjoy Napa on the cheap. Tip and advice about how to visit Napa … END_OF_DOCUMENT_TOKEN_TO_BE_REPLACED

Home Videos Get To Know Argentina Wine | Wine Folly If you love Malbec, Argentina is your ultimate wine region. But that’s not … END_OF_DOCUMENT_TOKEN_TO_BE_REPLACED