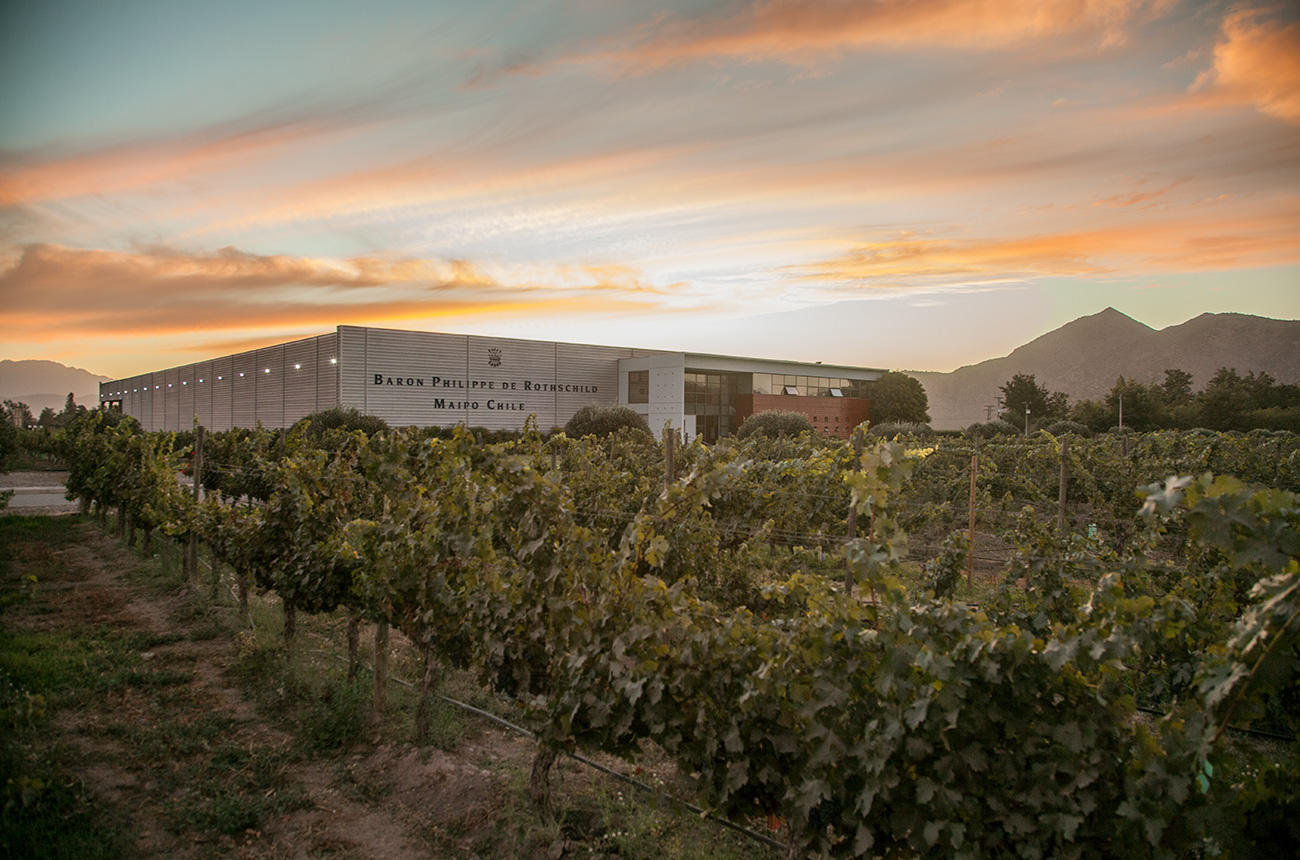 Known for its three classed growth estates in Paulliac – Château Mouton Rothschild, Château Clerc Milon and Château d’Armailhac – the iconic French producer had already ventured into the New World, creating Opus One in California’s Napa Valley with Robert Mondavi in 1978.

Meanwhile the Baroness was looking for a vineyard particularly suited to producing her own high quality Cabernet Sauvignon. She established Escudo Rojo in 1999, with a 60ha vineyard in Maipo Valley, 45km south of Santiago. The name of the winery is the Spanish translation of the German ‘rote schild’ which means ‘red shield’.

Today Escudo Rojo owns 1,020ha both in Maipo and Maule, also sourcing fruit from growers on long term contract in Casablanca and Colchagua Valleys. Emmanuel Riffaud has been in charge of winemaking since 2015. An agricultural engineer and oenologist, he joined Baron Philippe de Rothschild SA in 1999 as part of the Mouton Cadet technical team, before moving to Chile in 2008.

A Frenchman in Chile

‘When I arrived in Chile, I think it was much more with a French head,’ he says. ‘I was thinking that it was a New World country and everything should be easy to do – obviously easier than Bordeaux – so I arrived feeling quite confident. And then I had some surprises.’

Chile has roughly the same viticultural area as Bordeaux. ‘But if you compare the total hectares that you have in Bordeaux with what you have in Chile, the area north to south in Chile is 10 times more; it’s more or less 1,500km and in Bordeaux it’s 150km,’ explains Riffaud.

‘Then I discovered the three strong climate influences, with the Andes Mountains, the Pacific Ocean and the Central Valley. So if you mix north to south, east to west, it’s like a mosaic of the world.’

His early vintages were a steep learning curve that highlighted the differences between viticulture in France and Chile. ‘In France it’s quicker in terms of harvest,’ Riffaud explains. Grapes in Bordeaux vineyards will achieve three stages of maturity – technical, aromatic and phenolic – within 10 days or two weeks. ‘In Chile, it’s sometimes five weeks, sometimes six,’ he says.

This happened when Riffaud delayed the picking date of his first vintage of Carmenère. ‘The wine was very gorgeous, very round, very rich, but after two or three years, the acidity was a little bit too slow, and too low. It wasn’t the right balance.’

The Escudo Rojo vineyards in Maipo

At this point Riffaud decided to go back to basics. ‘Because I had a background as an agricultural engineer, I started to focus on the terroir expression,’ he says. Taking a precision viticulture approach, in 2017 he began mapping the vineyards. ‘We looked at the resistivity of the soil to really define micro blocks inside our parcels,’ he explains. This led to a significant shift in winemaking philosophy.

‘The 2018 vintage was really the big move in terms of style change and also philosophy of winemaking,’ says Riffaud, who now aims to find ‘the purest expression of the terroir in each grape variety’.

To that end the winery has also begun the three-year process of organic conversion. ‘In Chile, we have a very good climate, a dry climate, so we can preserve the fruit, without using so many pesticides and herbcides,’ says Riffaud. ‘The grapes are even better without any pesticides because you really have the taste of the fruit.’

This is part of Escudo Rojo’s general move towards greater sustainability, along with installing over 1,500 solar panels on the roof of the winery, which provide around 35% of its energy. ‘Having a green footprint is really important for me in terms of philosophy, because when you are in Chile, you go to the mountains, to the Pacific and you have really beautiful landscapes,’ explains Riffaud.

‘When you are here, you really feel nature and I think making wine you have an obligation to be aligned with nature and to take care of the future.’

As well as new solar panels on top of the winery, changes were made inside the winery. A new optical selection machine allows berry by berry selection, after sorting by hand and de-stemming. ‘The optical selection helps us to eliminate green parts that we had before and to have better, purest quality in terms of tannin,’ says Riffaud. After selection, grapes are gravity-fed into fermentation vats to preserve the integrity of the fruit.

The same attention to detail happens during vinification of the wines. ‘I say we have an a la carte vinification, because we taste all the batches every day. We say: “OK, this Cabernet Sauvignon needs a bit more extraction so we’re going to extract even more; this one, well the fruit is really exceptional so let’s be soft on the extraction, to preserve the fruit.”’

The final step was to refine the winery’s oak regime. ‘We reduced the impact of new oak in all the range, by more or less 30%,’ explains Riffaud. ‘We’re using only French oak and we prefer using one-, two- or three-year-old barrels. Also we reduced the toast of the barrels: we [previously] used a medium-plus; now we are using medium and medium-light.’

As a result of these significant changes in both vineyard and winery, Escudo Rojo Gran Reserva was introduced in 2018. A blend of selected parcels of Cabernet Sauvignon, Carmenère, Syrah and Cabernet Franc, it’s made to age. Escudo Rojo Origine was another new addition to the range from the 2018 vintage, a 100% Maipo Cabernet Sauvignon that embodies Riffaud’s new winemaking philosophy.

The name is a nod to Baroness Philippine’s original search for the ultimate Cabernet terroir when she arrived in Chile in 1996. ‘Cabernet Sauvignon is part of the DNA of the company,’ explains Riffaud. ‘So after 20 years in Chile, we decided to create this wine, which is the origin of our history here in the Maipo terroir with Cabernet Sauvignon.’

A new top wine, a tribute to Baroness Philippine who passed away in 2014, has also been released in the US and will be available in the UK later this year. Baronesa P, a Cabernet Sauvignon-dominant blend with Carmenère, Petit Verdot, Cabernet Franc and Syrah, is aged in new and used French oak for 14 months. It typifies the approach of this Chilean winery with French sensibilities.

‘I’m managing the winemaking process with a French head, thinking OK, it’s a Chilean terroir, but we don’t want to do a copy and paste of other Chilean wine,’ concludes Riffaud. ‘It’s better to continue with our own identity as a French producer, as a French winemaker. It’s Chilean, but with a French touch.’

Home Videos The WORLD of WINE – Wine News. Cheap wine, tasting notes and cooking with wine The World of Wine – May 2021 … END_OF_DOCUMENT_TOKEN_TO_BE_REPLACED

How to visit Napa Valley on a Budget. In this video Carson and I explain a few ways to enjoy Napa on the cheap. Tip and advice about how to visit Napa … END_OF_DOCUMENT_TOKEN_TO_BE_REPLACED

Home Videos Get To Know Argentina Wine | Wine Folly If you love Malbec, Argentina is your ultimate wine region. But that’s not … END_OF_DOCUMENT_TOKEN_TO_BE_REPLACED